A doubleheader against conference foe Lovell greeted the Pioneer B team on Saturday as it looked to start the conference season strong.

The first inning had both teams on the board, as the … 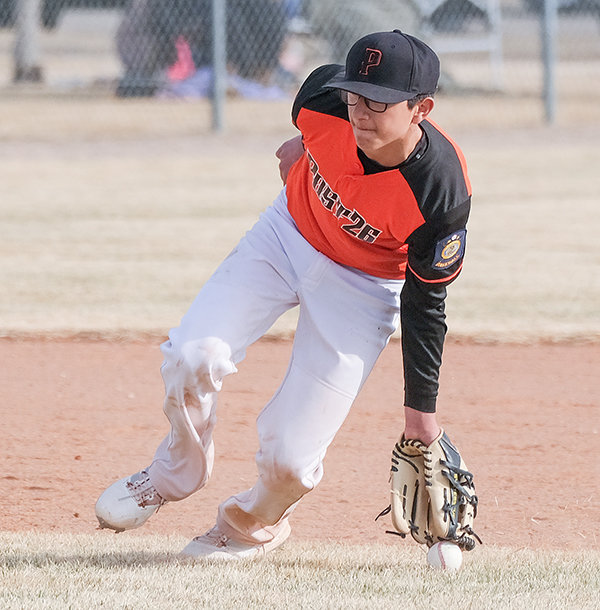 Jordan Loera reaches down with his glove to stop a short hit by the Lovell Mustangs on Saturday. The Pioneers dropped both games 15-2 and 8-7, starting conference play 0-2.
Tribune photo by Seth Romsa 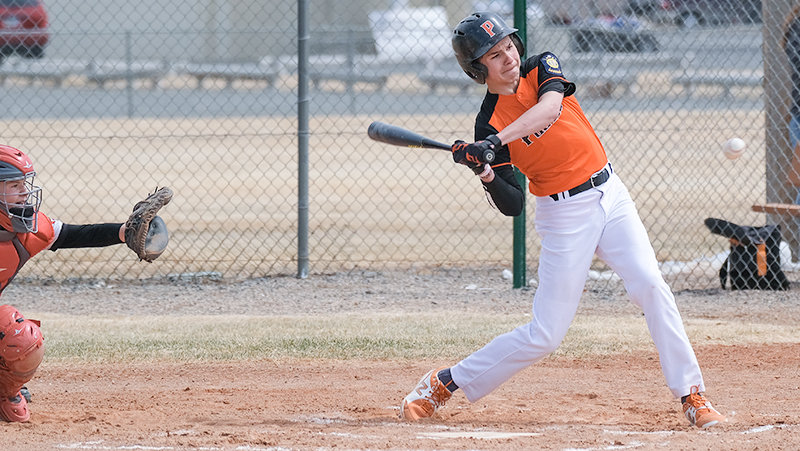 Caden Diaz gets ready to make contact with a pitch as the Pioneers B team tried to find their swing early in the season on Saturday.
Tribune photo by Seth Romsa
Previous Next
Posted Tuesday, April 19, 2022 8:15 am
By Seth Romsa

A doubleheader against conference foe Lovell greeted the Pioneer B team on Saturday as it looked to start the conference season strong.

The first inning had both teams on the board, as the Mustangs took a 3-1 lead over the Pioneers heading into the second inning.

A scoreless second inning and top half of the third allowed Powell to pull within one after Cole Fauskee grounded into a fielder’s choice.

Lovell responded, as walked batters piled up for the Pioneers and the Mustangs scored four in the fourth inning.

The Powell offense struggled the rest of the game as they were unable to find a run.

One run in the fifth followed by seven in the sixth allowed Lovell to build a 15-2 lead and end the game via mercy rule after the sixth inning.

Despite the Pioneers only giving up four hits the entire game, the Mustangs were able to get on base through 20 walked batters.

Lovell also took advantage of 10 stolen bases to help push its lead out over the six inning game.

“Whether things were going good or bad, the kids played hard the whole time,” Pioneer B manager Tyler England said.

A short break allowed the Pioneers to gather their bearings heading into game two.

Lovell found a run early in the contest to take a 1-0 lead in the first inning. Both teams played strong defense, as neither team was able to find another run until the fifth inning.

The Mustangs extended the lead in the fifth to 2-0, and extended it further to 6-0 in the top of the sixth.

Powell did not go away.

Three straight hits and two straight walks gave the Pioneers life as they brought in two.

Another walk, fielder’s choice and a wild pitch brought in three more runs as Powell trailed 6-5 heading into the seventh inning.

Lovell added two insurance runs at the top of the inning to make it 8-5.

Powell continued its momentum, bringing in two runs on walks.

In the final at bat, Zane Graft had the opportunity to bring in the tying and winning runs, but his hit to right field was caught, and the Pioneers lost 8-7.

“It is very early, and there are still a lot of things to go over or continue to practice,” England said. “We’ve got a group of kids that want to compete and that will keep us moving in the right direction.”

The B team will get another opportunity to take to the field on Saturday, as it hosts the 406 Flyers based out of Laurel, Montana, at 11 a.m. and 1 p.m.