Heading out for its first true road contests of the year, the Pioneer baseball team made the trip up to Laurel on Sunday to take part in a doubleheader.

The Pioneers came out on top in the first … 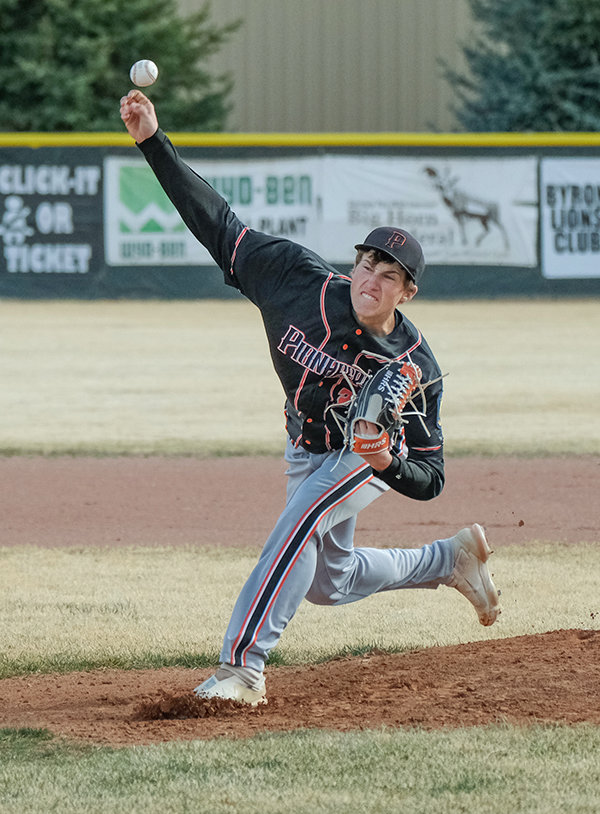 Pioneers pitcher Cade Queen delivers a pitch during the nine-inning contest against Lovell on April 21. Queen and the Pioneers have seen mixed results early in the season culminating in a 4-3 record.
Tribune photo by Seth Romsa
Posted Thursday, May 5, 2022 8:20 am
By Seth Romsa

Heading out for its first true road contests of the year, the Pioneer baseball team made the trip up to Laurel on Sunday to take part in a doubleheader.

The Pioneers came out on top in the first game 11-2, and a rain-shortened second game had Powell falling short 9-7.

In the first game, the Pioneers bats were hot early.

For the third time this season, Trey Stenerson hit a home run. The home run scored two in the top of the first, as he brought in himself and Jhett Schwahn, who reached on a walk earlier in the inning.

“Trey [Stenerson] came out and set the tone with that two-run homer,” Pioneers manager Jason Borders said. “That got us going and kind of eased us into it. Anytime you can come out and put two on the board on the road right away, the guys kind of relax and play loose.”

Laurel got back in the contest in the bottom half of the second inning, as three straight singles loaded the bases with no outs.

Pitcher Brock Johnson helped to get the Pioneers out of the jam, but a pop fly scored one, making the score 2-1 after the second.

The third inning separated the Pioneers from Laurel as they scored seven to take a commanding lead.

Powell got help from the bottom half of its hitting order, as key walks and singles along with a double by Dalton Worstell helped drive in multiple runs.

“The bottom half of our order hit a lot better this weekend,” Borders said. “We got Dalton [Worstell] in the lineup and we got good production out of all those guys in the order.”

Neither team scored until Powell got two insurance runs in the fifth on a Ryan Cordes single and a Schwahn sacrifice fly to make it 11-1.

A Powell error in the bottom half allowed Laurel to score an additional run, making it 11-2.

Stenerson came in to relieve Johnson in the final two innings as Powell finished with the 11-2 game one win.

Johnson finished the game, giving up six hits and one earned run, striking out seven batters.

Worstell finished the game 3-4 with two RBIs and Stenerson finished 2-3 with the RBI.

In the second game, the rain came down heavier, and Borders was unsure how much of the game would be played.

“I wasn’t even sure we would get through two innings of that game,” he said.

Powell again started fast, as Cade Queen and Aiden Greenwald both drove in a run to give the Pioneers another early 2-0 lead.

Laurel again responded in the bottom half of the second inning.

This time Laurel drove in more runs, and they took a 4-2 lead into the third.

Powell got one back, as Greenwald drove in a run on a single to right field to make it 4-3 heading into the fourth.

The Pioneers took the lead back as Stenerson brought in a run on a walk and Queen scored another, grounding out to first base to make it 5-4.

Laurel scored two more runs in the bottom half of the fourth, making it 6-5.

Cordes scored one on a single, and key base running brought him in during Schwahn’s next at bat on a wild pitch to make it 7-6.

Laurel tied on a double to left field, and a two-run home run gave Laurel the lead 9-7.

Powell got the top half of the inning to respond, but the game was called off after the top half due to rain.

“I probably pushed the envelope more than I should but I just tried to get runs across and keep the lead,” Borders said. “We knew it was going to end at some point.”

After the split series on the road, the Pioneers moved to 4-3 on the young season, as they start to get into more games each week — something Borders hopes will help the team get into form quicker.

The Pioneers have two sets of home doubleheaders this weekend, as the team begins longer weekends and tournament play.

The weekend kicks off Friday  at 5 p.m. and 7 p.m. against the 406 Flyers. Those games were moved up from their originally scheduled date due to colder weather forecasted for Sunday.

Powell then gets a rematch with Laurel on Saturday in a doubleheader at 1 p.m. and 3 p.m.

Borders is hoping to give his starting pitchers Johnson and Queen some rest from pitching this weekend, as they have already thrown above his anticipated inning count to this point in the season.

These two doubleheaders are the Pioneers’ final home games scheduled for more than two weeks. They head on the road for long stretches starting next weekend.