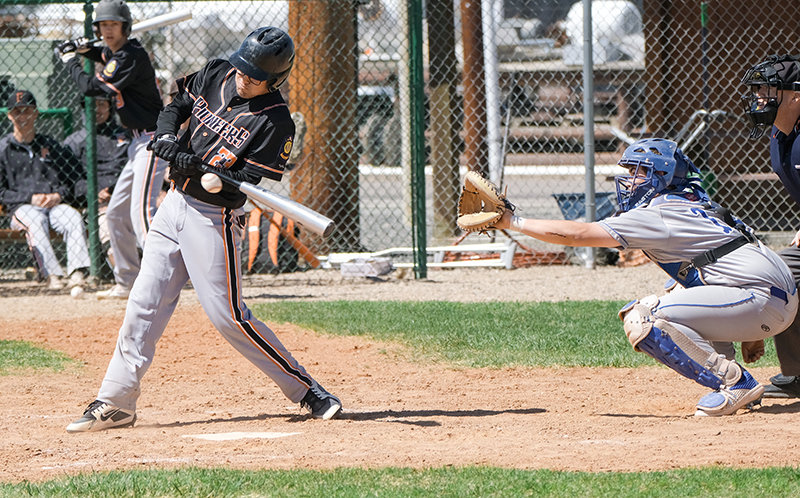 Aidan Wantulok swings with all his might through the ball as the Pioneers looked for a late answer against the Laurel Dodgers on Saturday.
Tribune photo by Seth Romsa
Posted Thursday, May 12, 2022 8:20 am
By Seth Romsa

The Pioneers offense started fast on Friday night, as a single, a walk and a hit batter loaded the bases early with only one out against the 406 Flyers.

Cade Queen drove in two runs, Aiden Greenwald drove in one and Dalton Worstell drove in another to give the Pioneers an early 4-0 lead against the visitors.

The Flyers found a way to respond in the second inning, as the score tightened to 4-3 through strong hitting and batters getting on base through walks.

After not getting a runner on base in the second, 406 Flyers got a second chance to tie the game.

The Flyers tied the game 4-4 on an error by catcher Cole Fauskee.

Throughout the rest of regulation neither team gained real momentum.

Powell’s best opportunity came in the sixth when they had two runners reach base on walks, and the Flyers had a runner on second after an error and a fielder’s choice.

Because neither team scored the rest of the seven innings, the game went into extra innings.

The Flyers scored early in the top of the eighth inning, as two singles coupled with a throw late to tag allowed a run to score.

The Flyers again added more runs to end the inning, as three more runners scored to make it 8-4, forcing a Pioneer response in the bottom half of the inning.

The Pioneers got runners on through a walk and a single, but Ryan Cordes struck out in the final at bat and the Pioneers dropped the first game 8-4.

In the second contest the Flyers took an early lead, as a home run in the top of the second inning made it 1-0.

The Pioneers responded in the bottom half after Nathan Feller scored from second base on an error. Feller reached second earlier in the inning after he was hit by a pitch to reach first and Ethan Welch hit a single.

The Flyers responded, adding two runs in the top of the third to take a 3-1 lead.

Powell had another response, as Trey Stenerson, Queen and Jacob Gibson each drove in a run to make it 4-3 heading into the fourth.

Neither team scored in the fourth, but the Flyers got an answer in the top of the fifth to tie the game 4-4.

Neither team scored again until Welch scored on an error with no outs in the bottom half of the sixth. Welch got to third after getting on base with a single and advancing after a bunt and another error.

Stenerson and Queen both brought in one run after walks, and Aidan Wantulok brought two runs in on a single to give the Pioneers a 9-4 lead after six.

Three up and three down at the top of the seventh inning sealed the victory to help the Pioneers earn a split in the series.

Hits were few and far between for the Pioneers in the first game against Laurel.

Neither team created momentum early, as runners were continually stranded at second in the first two innings.

The Pioneers were able to strike first, as Welch scored on a Brock Johnson ground out after he had reached on catcher’s interference and a walk to Cordes.

Despite leading 1-0, Queen got the Pioneer’s first and only hit of the game in the bottom of the fourth.

Laurel took the lead for good in the top of the fifth, as a line drive to center field and an error allowed the Dodgers to score three and take the 3-1 lead.

Powell continued to struggle finding contact, as Laurel added two more runs in the top of the sixth to pull further ahead at 5-1.

The Pioneers never got an answer. The Dodgers took the victory after pitcher Ian Bauer allowed one hit and got 12 strikeouts in a complete game.

The second half of the doubleheader started out slow for both teams, but the Pioneers struck first in the bottom half of the third inning as Trey Stenerson reached on an error and brought in a run.

Powell extended the lead to 2-0 in the bottom of the fifth. A Greenwald single drove in Johnson, who reached base on a single to start the inning.

The Dodgers tied the game in the top of the sixth on a passed ball and a single to tie the game 2-2.

Powell took the lead back on a Jhett Schwahn single, making it 3-2 and setting up a key seventh inning.

Laurel tied the game on an error early in the inning. The Dodgers took the lead and scored two on another error making it 5-3.

The Pioneers got one on with two outs in the bottom half of the inning, but did not have an answer for the late rally by the Dodgers, losing 5-3.

“We gotta learn to finish right now, I think that is our biggest problem,” Borders said.

The Pioneers head out for their first full road trip of the year this weekend, as they head to Sheridan on Saturday and Buffalo on Sunday for a pair of doubleheaders.

“We are going in against Sheridan’s AA team and I know we have not faced anybody like this yet,” Borders said. “Sheridan may compete for the AA state championship this year from what I have been hearing, so it will be a true test.”