Cold conditions and limited outdoor practices led to mixed results for the American Legion Pioneers in their second week of action. They shut out Lovell 4-0 Thursday but lost a doubleheader to the … 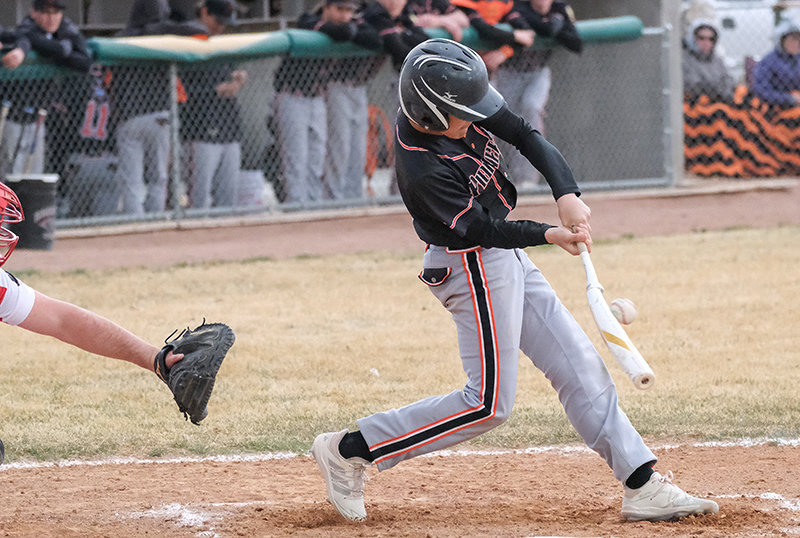 Ethan Welch drives a pitch in a contest against Lovell in Cowley Thursday. The percussion caused at the point of contact shows the high force present when bat meets ball. The Pioneers defeated the Mustangs in a 4-0 shutout. Powell travels Sunday to take on Laurel in a doubleheader at 1 and 3 p.m.
Posted Thursday, April 28, 2022 8:15 am
By Seth Romsa

Cold conditions and limited outdoor practices led to mixed results for the American Legion Pioneers in their second week of action. They shut out Lovell 4-0 Thursday but lost a doubleheader to the 406 Flyers 13-1 and 6-4 on Sunday.

Starting off the action earlier in the week, the Pioneers made the short trip to Cowley on Thursday to take on the Mustangs in a nine inning contest.

Early on, both teams struggled to find their swing as they combined for two hits over the first three innings of play.

Leading off the fourth inning, Pioneers catcher Jhett Schwahn doubled to left field to give the Pioneers life.

Schwahn then advanced to third base on an error, and shortstop Brock Johnson grounded into a fielder’s choice, bringing in Schwahn to make it 1-0.

Neither team threatened to score again until the bottom of the sixth inning.

Through a mix of walks, stolen bases and errors, the Mustangs had a runner on second and third with only one out.

Pitcher Trey Stenerson struck out the remaining two batters, and the Pioneers got out of the jam.

Starting off the seventh, Stenerson gave the Pioneers another chance to score after a deep triple to left field that held up against the fence.

Stenerson scored on a wild pitch, giving the Pioneers a 2-0 advantage.

In the bottom half of the inning, Stenerson struck out three of four batters to hold the 2-0 lead.

The Pioneers added two more runs at the top of the eighth on a Stenerson single, and a wild pitch brought in Schwahn, who had rounded the bases on a single, and subsequent walks.

Johnson struck out four of the final six batters, as the Pioneers combined for a two-hit shutout over the Mustangs.

“It was good to get the win, (but) we did not hit the ball as well as I would have liked,” Pioneer manager Jason Borders said. “It is great to go to Lovell and get a win.”

Heading into Sunday, the Pioneers came up against the 406 Flyers, a team made up of players from both Laurel and Billings.

The Flyers started things early, as an error led to a run to give the visiting team a 1-0 lead.

The second and third inning mirrored the first, as the Powell bats struggled to get going and the Flyers added two more to make it 3-0.

In the bottom half of the fourth inning, the Pioneers got on the board as Stenerson hit a solo home run to left field — his second of the season.

Neither team found success in the fifth, setting up a key sixth inning.

That is when the game got away from the Pioneers.

Two walks and a batter hit by a pitch started the inning, loading the bases for the Flyers with no outs.

An injury to Ethan Welch forced the Pioneers to make their first change of the inning, forcing Ryan Cordes onto the mound with no time in the bullpen.

“Constant pitching changes never allowed for the bullpen to warm up the pitchers,” Borders said.

Borders felt throughout the game they were constantly behind on the count and allowed too many walks, as the Pioneers walked 14 batters in the game.

The Flyers took advantage of the pitching change and added 10 runs in the sixth.

Powell failed to find any momentum in the bottom half of the sixth, and the game ended via mercy rule 13-1.

Despite giving up 13 runs, the Pioneers only allowed five hits in the first game.

“We need to cut back on the errors. Pitchers need to throw strikes,” Borders said. “We got behind on pitch counts and gave too many walks out.”

A short break allowed for the Pioneers to regroup, allowing Powell to come out stronger in the second game.

The top half of the inning finished with three straight outs, giving the Pioneers a chance to take an early lead.

Cordes walked to lead-off, and Schwahn singled to center. An error on the throw allowed Cordes to score, and Schwahn advanced to second.

The Pioneers failed to advance Schwahn, leaving him stranded on second.

Both teams struggled to find any offense over the next four innings, as the teams combined for two hits, one batter walked and one batter reached on an error.

The Flyers tied the game 1-1 on a line drive to center field in the sixth inning.

An error and two walks loaded the bases, with two outs in the bottom half of the sixth inning.

Cade Queen drove in two runs on a single to center field, and Aiden Greenwald brought in another on an error by the Flyers’ second baseman.

Leading 4-1 heading into the seventh inning, the Pioneers appeared poised to hold off the Flyers.

A single followed by a walk and a batter hit by a pitch loaded the bases with zero outs for the Flyers.

A fielder’s choice by Stenerson got one runner out at second, but one run scored to make it 4-2.

A ball that Schwahn stopped bounced behind the batter. In the confusion, Schwahn was unable to get the ball with his path blocked, and a run scored from third.

After another walk, the Flyers hit a triple, bringing in the winning run.

On the throw home, the ball was thrown out of play into the Flyers’ dugout, and an additional run was scored to make the score 6-4.

Powell got out of the top half, setting up an opportunity to end the game.

The first two batters were called out, but two walks and Schwahn being hit by a pitch loaded the bases.

Stenerson stepped up, but a high flying ball was caught in the infield, and the Pioneers lost 6-4.

“I am glad we did not come out and lay down,” Borders said. “For us to load the bases and have the fourth hitter up, it was awesome they did not lay down and still gave us a chance to win.”

Johnson finished with nine strikeouts while giving up five hits and four earned runs. Queen had one strikeout and gave up two earned runs in relief.

The Pioneers are still early in the season, as they hold a 3-2 record heading into this weekend.

A nine inning game against the Flyers on Wednesday was canceled and may be rescheduled, as neither team has deep rotations for pitching.

The Pioneers will now head to Laurel on Sunday for a doubleheader at 1 p.m. and 3 p.m.

“We just need to get better in all phases, especially hitting the ball better,” Borders said. “We will have a few more of these types of games, but we will learn from them.”

The Pioneers return home on Saturday, May 7 for a doubleheader against Laurel and then host another doubleheader with the Flyers at home on May 8.