The Powell High School girls’ soccer team dropped its fourth match of 2021 Tuesday, falling 8-0 at the hands of Worland. The Panthers didn’t get a shot on goal in the loss. 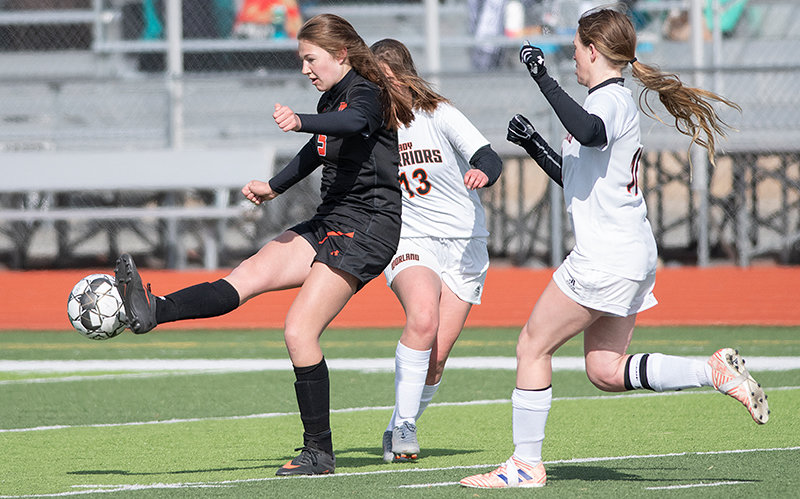 Senior Madi Fields boots a ball to the middle of the field Tuesday in Powell’s 8-0 loss to Worland. With a week and a half until their next game, the Panthers will use the time off to make improvements on both sides of the ball.
Tribune photo by Carson Field
Posted Thursday, April 1, 2021 8:00 am
By Carson Field

The Powell High School girls’ soccer team dropped its fourth match of 2021 Tuesday, falling 8-0 at the hands of Worland. The Panthers didn’t get a shot on goal in the loss.

In four matches, PHS has scored just once. As the season progresses, the team’s focus will be to get quicker shot attempts.

“We came into the season knowing our girls like to be set up perfectly before shooting,” head coach Kaitlin Loeffen said. “In a varsity match this will never happen. It is about making just enough space to get the shot off. I can’t physically go out there and take the shot, so they are going to have to shift their mindset and start being an offensive threat.”

The Panthers again struggled with 50-50 balls in their most recent loss. Whether it was a ball in the air, throw-in or pass, they had trouble securing the ball in contested situations. To become more competitive, PHS must improve in this area.

“We need to increase our physicality and want for the ball,” Loeffen said.

While the coach cited a need for the team to commit fewer lapses in its defensive line and become “more aware” overall defensively, Loeffen was impressed with Sarah Hampton’s defensive effort. She was a standout, stymying multiple Worland opportunities.

“I ask my girls when they come to the sideline whether their tank is empty, meaning did they leave it all on the field, and it was very clear she had,” Loeffen said of Hampton.

PHS, currently 0-4, now has a week and half before its next contest — an afternoon tilt against Lander Valley at home. In that time, Loeffen and assistant coach Stan Hedges will watch film with the team and reinforce strategies on both sides of the ball.

“We will focus on first touch, getting to the ball first, and defensive tactic,” Loeffen said.