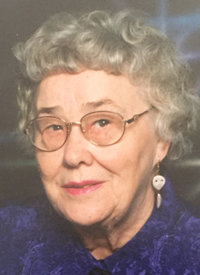 Vera Marie Lamb, talented crocheter, knitter, baker and decorator of countless wedding cakes, presider of 70-plus years of holiday dinners, maker of rugs, gardener, mother, grandmother, great-grandmother and great-great grandmother, died on March 12, 2022, in Cody, at the age of 99. “Going on 100,” she said.

Marie was born in 1922 in Eugene, Oregon, and moved to Belfry, Montana, at age 3, with her mother and two brothers. Raised in Montana, she became an accomplished horsewoman and met her future husband, Claude Lamb, as a teenager. Their first three children were born in Montana, where they also cared for several of her younger half-siblings. Adventure and opportunity drew them to drive up the newly opened Alaska Highway in 1947. They settled in Suntrana, near Denali, where Claude worked for Cap Lathrop at the Healy River Coal Corporation. They had two more children and then, after the mine closed, moved first to Fairbanks and later to Anderson, Alaska, where Marie served as mayor and immersed herself in community activities.

After Claude’s retirement from the Clear AFB electrical plant, the Lambs moved to Powell, purchased some horses and settled into years of planned contentment.

Claude’s untimely death led Marie to return to family in Fairbanks, Alaska, where she became a volunteer fixture in the breadline and engaged in countless other worthy endeavors around town. Her friendships were many and her kindness knew no bounds.

Marie was preceded in death by her husband, Claude, and children, Lloyd, Lonny and Connie Lamb. She is survived by her daughter Parlee Thompson, son Kenneth Lamb, as well as eight grandsons, 13 great-grandchildren and 10 great-great-grandchildren.

She will be interred at Crown Hill Cemetery in Powell, beside the husband she loved so very much.