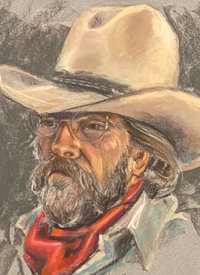 Being a homestead boy of Heart Mountain near Powell, was Bob’s proudest heritage. He passed away Dec. 28, 2021, of a short illness, He was 73.

Bob was born March 12, 1948, to Robert F. Darling and Iva Hutchens Darling. In 1948 Bob’s father, a World War II veteran, drew a lot number for a homestead on Heart Mountain. They pulled two barracks from the internment camp to their land; one for the house and the other for the barn. From a young age Bob loved farm life.

Bob was educated in the Powell schools. He met his sweetheart, Cheryl Goodman, at a dance in 1964. Bob and Cheryl were married in 1966. They welcomed their first daughter, Jamie, in 1967.

The family lived in Powell for two years while Bob worked in the oil field and Phillips 66 service station. Bob’s next job, in Cody, at Husky Oil Refinery prompted the young family to move. Tracie, the second daughter, came along next in 1970. In 1971 the Darlings purchased their home on Sage Creek where they have lived for 50 years.

After working 13 years for Husky Oil, Bob ventured into his own business. In 1981, Darling Welding was established, primarily working oil fields, farms and ranches all around Cody and Meeteetse, as well as locations in Montana. In 1992 the business was broadened to design work. Bob and his wife Cheryl worked on creating decorative furniture, light fixtures, and quilt rack beds.

In his later years, Bob worked at CarQuest and Cody Enterprise while doing small metal work jobs for friends and family. In the last few years Bob had the chance to embrace one of his true passions at Cody Veterinary Clinic. He was so fulfilled being able to work with an outstanding veterinary team, while being able to devote his kind-hearted nature to every animal that came in.

Bob was a voracious reader. He read many books about politics, history and fictional novels from present day authors. He was the founder of the Sage Creek Book Club, and a 50-year member of the Sage Creek Community Club. He was a board member on several Park County boards, and a 4-H leader.

Bob loved his family and enjoyed spending time with them. He loved spending many hours with them outdoors, fishing, hunting, camping and card playing, with lots of laughter, or just hearing from them. Over many summers at the Darling home there were large amounts of company, nieces and nephews and their children, who all brought so much joy to him.

Sitting outside reading and smoking a “roll your own,” going up the hill to change water, or having a friend stop by for coffee or a cold one, was how Bob loved to spend his time.  He loved to hear stories and tell them.

Bob lived his life true to his convictions — honesty, helping others, a good laugh, and the always present Western movie or book, often with a dog or two next to him.

Bob is survived by his wife, Cheryl, of 55 years; daughters, Jamie Bock (Randy) of Newcastle, Wyoming, and Tracie Darling (Kathy) of Mansfield, Texas; sisters, Jane Hood of Henderson, Texas, and Janet Burris (Steve) of Turney, Missouri; grandchildren, Nick Bock of Newcastle, Wyoming, and Kellar Bock of Sheridan, Wyoming; sister-in-law Holly Goodman of Cody; and his nieces and nephews and their children.

In lieu of flowers, donations can be made to the Dexter Fund at Cody Veterinary Clinic or Sage Creek Community Club. An online guestbook is available at www.BallardFH.com