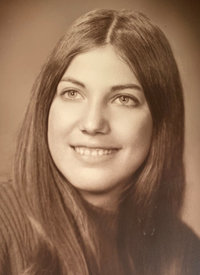 Carmen Elaine was born to Jack and Phyllis Stockwell, the seventh of 14 kids. She was named by her Uncle Orville who had just seen the opera, Carmen. She was known as the “nice” big sister, carrying the role of babysitter, medic, camp cook, milk maid, and confidant. She made good on her promises of not telling mom, saving the younger kids from much trouble. These experiences are probably why she was the best and most fun mom her kids could have.

Voted most athletic in her Greybull High School class, Carmen passed on her competitive spirit to her kids and grandkids. After high school, Carmen headed to Northwest College where she lavished living with indoor plumbing. She received a band scholarship to play her saxophone in the jazz band, relished her role on the softball team and was a member of the first women’s basketball team.

The summer after her freshman year, Carmen took a job in the kitchen at Shoshone Lodge dude ranch outside of Cody. It was there that a cocky and handsome young cowboy finally met his match. The spark ignited with a war of wits and lasted 46 1/2 years. They weren’t so keen on each other at first, Bill commenting that she was “a smart-ass.” This good-looking gal wasn’t going to be easily convinced that she was ready to be tied down. It wasn’t until she witnessed Bill wrangle some horses gone wild so calmly and naturally that she thought to herself, “that’s my cowboy.” Three weeks later, she had a ring on her finger, and they were planning a January wedding.

That fall Bill dropped Carmen off at college for her sophomore year only to realize there were a dozen young men hoping to win her heart. He left thinking, “what have I gotten myself into with this pistol?” Leaving a trail of broken hearts, Bill and Carmen were married on Jan. 3, 1975. It was quite the celebration. Carmen’s dad, Jack, felt the dance floor wasn’t slick enough and, in a pinch, threw down soap flakes. They danced on in suds as the snow from outdoors mixed with the soap. They honeymooned skiing in Red Lodge.

In April 1976, Carmen and Bill welcomed their first son, Lane, into the world. Just 10 months later came the twins, Jake and Joan. Time flew by with the three little ones. They spent the next several years on ranches in Northern Wyoming, finding time to camp, fish and hike between the ranch chores. In 1982, they welcomed their daughter Megan and four years after that were surprised by the baby of family, Erin.

Carmen spent the next several years sharing her wit, wisdom and amazing sense of humor with all who were lucky enough to know her. A life shaped by grief with the loss of four siblings, Carmen never took time and opportunities for granted. Carmen lived for moments of laughter with her husband, sisters and brothers, kids, grandchildren and friends.

Carmen’s journey took an unexpected turn when she was diagnosed with stage four cancer this past March. While the prognosis was grim, we were all hopeful that there were still years left to spend with her. That was not to be.

Wealth has never been measured by material things in Carmen’s life. This legacy has been so evident the past few days as her family gathered to send her to Heaven with much love and laughter.

In lieu of flowers, you can make a donation to Dano Youth Camp (http://www.danoyouthcamp.org/ ) or the Billings St. Vincent Cancer Care Services (via St. Vincent Health Care Foundation - https://www.sclhealth.org/locations/st-vincent-healthcare-foundation/ ) in Carmen’s honor. Arrangements have been made by Cremation and Funeral Gallery in Billings.

A memorial service will be held 10 a.m. on Wednesday, July 7, at St. Thomas the Apostle in Billings, Montana .