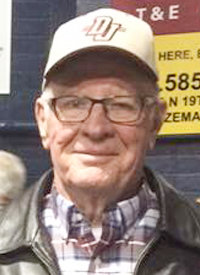 Alan was born on Oct. 3, 1941 to Richard R. (Dick) and Estes (Jack) Clarke Jones in Powell, Wyoming. He was the second of three children born to this union. He attended school at Parkside Elementary, Powell Junior High and Powell Senior High School, graduating in 1959. He continued his education at Northwest Community College and completed his bachelors degree at the University of Wyoming in 1963. Alan was an Eagle Scout and a member of the high school swim team and band.

Alan married his high school sweetheart, Alayne Coorough, on Aug. 27, 1961. They recently celebrated 60 years of marriage. In 1963 they moved to Thermopolis, Wyoming, to begin a lifelong journey with Dick Jones Trucking, the family business. Their first child, LeAnne, was born in Thermopolis and two years later, after a move to Powell, their second child, Mitch, was born. Alan became president of Dick Jones trucking in 1967 and retired in 2000.

In 1999 he was appointed to the Wyoming House of Representatives to fill a vacant seat and then was elected four times to represent District 25. His common sense, love of Wyoming and Park County and calm presence made him a well-respected member of the Legislature. He retired in 2008 as a self-imposed term limit.

In his retirement years he enjoyed traveling the country in various motor homes, four-wheeling with his buddies, taking walks with his dog, coffee at the Skyline, making the daily bank and post office run for the trucking company, woodworking and sharing in the lives of his children and grandchildren.

Beyond the organizations he helped and the awards he received, he was just a great guy. He never met a stranger and lived life by the philosophy…it’s a great day to have a great day. He was a very hard worker and never expected anything from others that he wasn’t willing to do himself. He was a natural leader and had a kind and generous heart. He will be remembered mostly as a doting husband, proud father and loving Papa to his grandkids.

He is survived by his wife Alayne, children LeAnne (Tim) Kindred of Powell, Mitch (Anne) Jones of Bigfork, Montana, and his grandchildren, Maddy and Zac Jones and Sara and Lindsay Kindred. He is also survived by his sister, Nancy (Tom) Cook of Cody, Wyoming; brother Tom (Barbara) Jones of Cheyenne, Wyoming; two nieces and two nephews and their families. He was preceded in death by his father and mother.

Alan has been cremated. Despite his request to have his ashes “put in the intake of a truck and blown out the stacks,” he will be buried at Crown Hill Cemetery at a later date.

Thompson Funeral Home is in charge of cremation. Please visit their website www.thompsonfuneral.net. There will be no formal funeral service.