Coming into the last week of the regular season, the Trapper women’s soccer team needed to win two of their last three games to host a first round playoff game. The squad picked up the first … 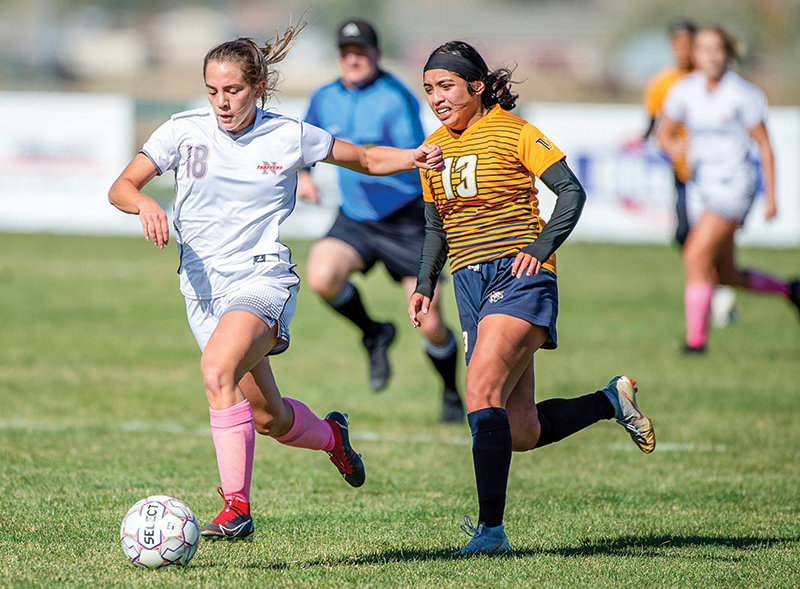 Forward Peyton Roswadovski holds off a Western Nebraska defender during the first half of NWC’s match on Friday. Roswadovski would tally two goals and an assist during the match as the Trappers went on to win 3-0.
Tribune photo by Mark Davis
Posted Thursday, October 21, 2021 8:05 am
By Seth Romsa

Coming into the last week of the regular season, the Trapper women’s soccer team needed to win two of their last three games to host a first round playoff game. The squad picked up the first victory, but they fell just short of the second, losing 1-0 twice in the span of four days.

The weekend got off to a promising start, as the Trappers (7-7-1 overall, 4-4 Region IX) hosted Western Nebraska (2-11-2 overall, 0-8-1 Region IX). NWC controlled the pace of the match from the very beginning, but was unable to find a clear shot to challenge Cougar goalkeeper Litzi Delarosa.

Then in the 35th minute, Trapper Peyton Roswadovski was able to find her way past the defense and fire a shot past Delarosa to put the Trappers up 1-0.

Things got worse for the Cougars in the second half, as Delarosa would go down with an injury after a collision in the box and would not return.

The Trappers attempted more shots throughout the second half, trying to find a finish from long distance. Finally, after a dozen attempts and a shot tipped off the crossbar, the Trappers found their second goal in the 65th minute: Lauren Hiatt scored on a breakaway goal off an assist from Roswadovski.

“I felt like we played better in the second half and we were connecting passes better,” Trapper coach Rob Hill said.

Roswadovski would net her second goal just seven minutes later to put the Trappers up 3-0. That would be the final  score, giving the Trappers momentum going into Saturday.

The Trappers welcomed Northeastern (12-3-1 overall, 6-1-1 Region IX) on Saturday, as they looked to get revenge for a lopsided loss earlier in the season 5-0.

The teams were deadlocked throughout the match, with both sides having their opportunities but neither able to find the back of the net.

However, with the game seemingly destined to head for overtime, Northeastern found the back of the net on a low-driven cross to Yadira Ramos. It put the visiting team up 1-0 in the 86th minute.

The Trappers, desperate to score a goal, pushed up field, but were unable to find an equalizer in the closing minutes.

Northeastern scored again as time expired, but it was not counted by the officials as the match ended 1-0.

The Trappers went on the road on Tuesday to Western Wyoming (9-4-3 overall, 4-2-2 Region IX) in Rock Springs, with the chance to host a first round playoff game on the line.

This game was originally scheduled to take place back in September, but it was postponed to Oct. 12, and was rescheduled again to Tuesday due to weather.

The Trappers would not be able to generate much pressure throughout the game to test Western Wyoming, as they only managed five shots on goal.

Trapper keeper Alexa Williams however was challenged throughout, as the Mustangs generated 15 shots on goal.

Unfortunately for the Trappers, Williams was unable to save all of the attempts, as the Mustang Madison Bailey got one past in the first half. It proved the difference-maker.

“They are an extremely hard working team,” Hill said. “Their work rate never dropped off when their subs came on the field, and they were unlucky to come out with only one goal.”

With the Trappers losing 1-0, that dropped them from the potential No. 4 seed down to the No. 6 seed in the first round of the Region IX tournament, set to kick off this weekend.

That seeding will have the Trappers travel to Cheyenne on Friday to take on Laramie County Community College at 2 p.m.

When the Trappers hosted the Golden Eagles earlier in the season, NWC controlled possession but was unable to generate any chances in the final third of the field, falling 2-0.