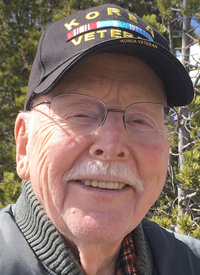 On Monday, Nov. 7, 2022, Rex Randall Bennion, 92, stepped into eternity and into the loving arms of his wife, Donna Rae and son, Randy.

Rex Randall was born on Oct. 28, 1930, in Meeteetse, Wyoming, to Lewis Clifton Sr. and Alma Evelyn (Creager) Bennion.  Randall’s father, Lewis C. (Sonny) was a rancher, and Rex grew up on the ranch. He attended grade school through high school in Meeteetse, where he played sports and was a good student. After graduating in 1948, he worked on the family ranch and for the Forest Service and Yellowstone National Park.

In October 1952, he was drafted into the U.S. Army and was sent to Trieste, Italy, during the Korean War. In the fall of 1954, he was honorably discharged, and being the good looking, fun loving young man he was, he traveled through Europe and England before heading home to Wyoming. When Randall got back to Wyoming, he attended Northwest Community College in Powell, Wyoming. He was active in a number of organizations including dancing, where he won best dancer for the year 1957, and graduated with an Associate’s Degree in Agriculture.

In 1958, Rex Randall served a two-year mission in New England, Canada and Newfoundland for the Church of Jesus Christ of Latter-day Saints. He met Donna Rae Crowley while in Maine, and after his mission returned there to court her and ask her to be his bride. He brought her home, and they were married in the Idaho Falls Temple on May 13, 1960. They made their first home in Meeteetse and later in Cody where Rex worked for Husky Oil for many years.

Rex was very active in the Church of Jesus Christ of Latter-day Saints, holding many positions and sang in the choir. Rex and Donna loved to dance and were members of a square dance club for many years. They also enjoyed having friends over for dinner and games. As a family they spent many weekends camping, fishing and hiking or in Meeteetse at the ranch working.

In 1976, Rex moved Donna and the younger children to the ranch in Meeteetse, and he went to work for the school district part-time and ranched. He loved to ride horseback, hunt and fish.  In 1984 they moved to Rialto, California, so Donna could be close to her family. Rex went to work for the Church of Jesus Christ of Latter-day Saints in Warehouse Management. He retired from there in 1994, and they moved to St. George, Utah. They purchased a beautiful new RV trailer and traveled all over the country visiting friends and family, spending a couple summers as hosts at RV parks in the mountains and enjoying their retirement.

When his dear wife passed away, he stayed in St. George for the winters and traveled to Cody and Meeteetse for the beautiful, cooler summers. He loved spending time at the family cabin up Wood River, riding his ATV around and fishing.

Funeral services will be Saturday, Nov. 19, 2022, viewing at 10 a.m. and service at 11 a.m. at the Church of Jesus Christ of Latter-day Saints in Meeteetse. Memories and condolences can be left on Rex’s memorial page at BallardFH.com.