Looking to create momentum heading into a home tournament this weekend, the Pioneers battled Tuesday night against the Sheridan Jets, edging out two one-run victories 8-7 and 7-6.

Early on in the … 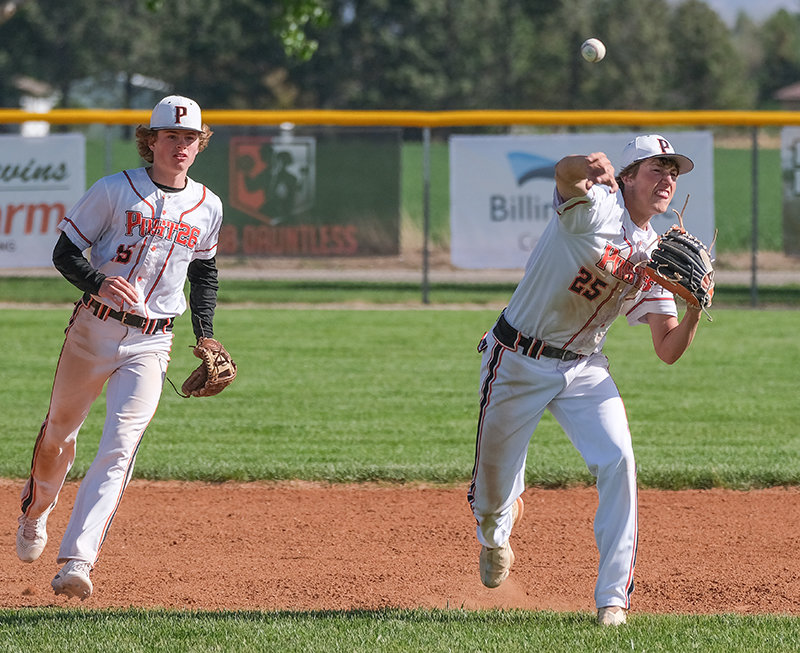 Cade Queen (right) follows through on his throw as teammate Brock Johnson (left) watches. The Pioneers escaped with two narrow victories 8-7 and 7-6 over Sheridan on Tuesday night.
Tribune photo by Seth Romsa 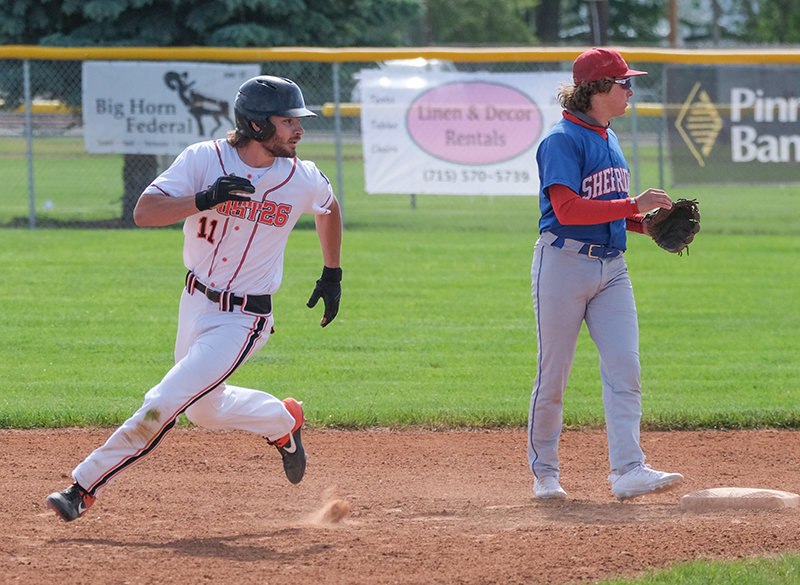 Nathan Feller looks behind him as he rounds second base searching for the ball that got past on an errant throw. Feller scored on the play. The Pioneers have a couple of days to rest and prepare before starting the Father’s Day Tournament on Friday.
Tribune photo by Seth Romsa
Previous Next
Posted Thursday, June 16, 2022 8:20 am
By Seth Romsa

Looking to create momentum heading into a home tournament this weekend, the Pioneers battled Tuesday night against the Sheridan Jets, edging out two one-run victories 8-7 and 7-6.

Early on in the first game, Powell (17-15-1 overall) and Sheridan (9-5 overall) were both unable to find any offense as two runners reached base in the first two innings.

The Jets got on the board first in the top half of the third due to an errant throw allowing one run to score.

Sheridan added one more before heading to the bottom half.

In the bottom half of the inning, two errors on a pick-off attempt at first allowed Nathan Feller to round the bases and score after being hit by a pitch to lead off the inning.

Powell tied the game in the bottom of the fourth inning as Aidan Wantulok drove in a run on a single.

The Pioneers then gained the lead, as Dalton Worstell scored on a wild pitch. He had reached earlier in the inning on an error, and Brock Johnson drove in another run to make it 4-2 after four innings.

The Pioneers started to spiral out of control in the top of the fifth, as Sheridan scored two runs on miscommunications by Powell, and lost Ryan Cordes to a significant injury.

“I still feel like we are not focusing enough,” Pioneers Manager Jason Borders said. “On defense we have mental lapses. It definitely was not a clean baseball for either side.”

Despite the mistakes and injury, Powell escaped with the inning tied at 4-4.

The Pioneers again scored on a confusing sequence in the bottom of the fifth. Cade Queen and Trey Stenerson reached on two singles to start the inning, and an attempted pick-off at first base led to confusion in baserunning. Queen initially advanced to third as Sheridan was in a run down situation with Stenerson, and Queen stole home to score while Stenerson stayed untouched and remained safe at first.

A double to deep left field by Wantulok brought in Stenerson as Powell gained a 6-4 lead.

Sheridan cut the lead down to one in the top of the sixth, setting up an important seventh inning.

More confusion on plays allowed Sheridan to get baserunners on in the seventh, and Sheridan brought in two runs — taking the lead at 7-6.

Wantulok went up to the plate with two outs and was facing a full count.

Wantulok hit a line drive to left field to drive in both runs in walk off fashion to give the Pioneers a game one victory.

“They went lefty versus lefty and Aidan came out on top,” Borders said.

Wantulok finished with 3-4 at the plate and drove in four runs for the Pioneers.

Going into the second game, both teams were unable to score in the first inning again and searched for answers in the second.

Sheridan got one on the board in the top half, and Powell answered on a wild pitch to tie the game 1-1 after two innings.

The Pioneers took the lead in the third, as Jhett Schwahn drove in a run and Stenerson drove in two on an error to give Powell a 4-1 lead.

Powell took the lead back in the bottom of the fifth, as Queen brought in a run on a single making it 5-4.

Sheridan scored two in the sixth, setting up another key bottom half of the inning for Powell.

Multiple errors by the Jets allowed Wantulok and Worstell to score, after reaching base on a double and a walk to lead off the inning.

Maintaining a 7-6 lead, Stenerson finished off the Jets in the top of the seventh to give Powell another victory.

Powell now gets the opportunity to play in front of the hometown crowd all weekend, as the Pioneers host the annual Father’s Day Tournament starting Friday morning.

“I am looking for the same thing I was looking for going into Sheridan. We need to be more consistent in all aspects,” Borders said.

Borders is hoping to clear up some pitching concerns regarding pitchers getting too deep in counts and solely focusing on striking out players — which is forcing some pitchers to throw up to 20 pitches an inning.

The first game for the Pioneers is set to start at 10 a.m. on Friday against Riverton, and they finish off the day with a game against Green River at 5:30 p.m. with temperatures slated in the upper 90s.

On Saturday Powell matches up with the Miles City Outlaws at 5:30 p.m. in the only matchup of the day for the Pioneers.

Powell concludes the weekend by playing the 406 Flyers at 4:30 p.m. on Sunday before heading back into conference play next week.