Inclement spring weather caused several intermittent practices and resulted in missed tournaments for the Panthers golf team. The blustery weather continued as the spring golf season wrapped up for … 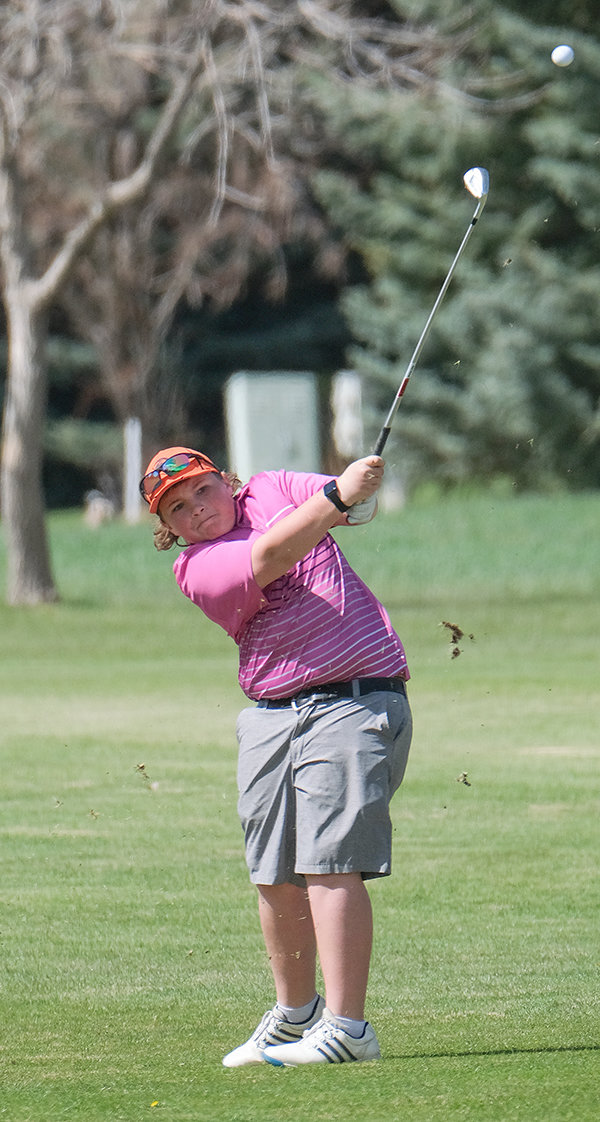 PHS freshman Trey Scott follows through after a shot during a round in Cody on May 6. The spring golf season wrapped up in Lander last Friday.
Tribune photo by Seth Romsa
Posted Thursday, May 19, 2022 8:10 am
By Seth Romsa

Inclement spring weather caused several intermittent practices and resulted in missed tournaments for the Panthers golf team. The blustery weather continued as the spring golf season wrapped up for the Panthers. They played one final round in Lander on Friday.

A smaller team went on the road for the Panthers final contest, as four golfers hit the course against 10 other teams and more than 60 other athletes.

Leading the way for Powell was freshman Trey Scott with a score of 95.

Panthers golf coach Troy Hildebrand said Scott has managed to play consistently in the spring. He anticipates Scott will play over the summer and come back strong in the fall.

Sitting just one stroke behind Scott was fellow freshman Jackson Hill, who finished with a score of 96.

“Jackson [Hill] has really come on this spring,” Hildebrand said. “He made some strides during the fall season but this spring he has taken his game up a couple of levels and he is doing a lot of things well as he heads into the summer.”

Junior Seth Siebert placed third on the team. He finished with a score of 98.

Hildebrand said Siebert has improved in limiting his mistakes in the spring. Hildebrand believes that if Siebert hits the course consistently over the summer he can make a significant jump in the fall as a senior leader.

Rounding out the team was sophomore Andrew Jones, who was consistent in finding the green but was unable to finish his putts en route to a 101.

Hildebrand said Jones has shown growth in the past two years. If he continues to get out as the weather improves then he will have an improved junior season.

Heading into the summer the Panther golf team has a bright outlook.

Hildebrand said the Panther golf team has the chance to make leaps heading into the important fall season.

“Hopefully a strong summer of play will help us continue to be able to quickly adapt to greens away from our own course next fall,” Hildebrand said. “I feel like we have a pretty solid group of five to eight players that are willing to put in some work this summer to improve their game, which is a really positive sign.”

The first practice for the golf season tees off on Aug. 8, with the first competition just three days later in Cody.