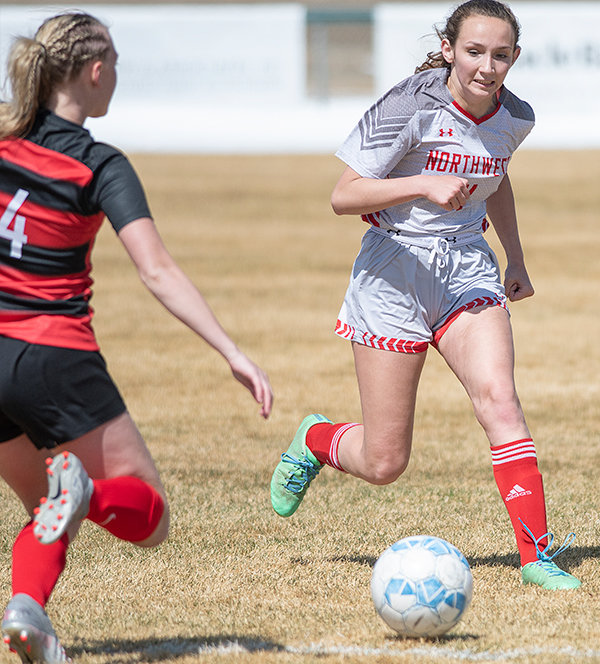 Malia Hedges defends a ball against Casper College earlier in the season. The Trappers put together a strong effort in Tuesday’s loss to the Thunderbirds, falling 3-2 in overtime.
Tribune photo by Carson Field
Posted Thursday, May 13, 2021 8:10 am
By Carson Field

The Trappers fell 2-0 on May 5 against Central Wyoming College before dropping a 3-2 overtime contest to Casper College on Tuesday. NWC’s losses marked the end of the regular season, with the squad finishing with a 1-9 record.

In the first meeting with CWC, Northwest earned its first win, but the Trappers were unable to find the same success the second time around. Because of a conflicting men’s game in Cheyenne, head coach Rob Hill wasn’t able to be on hand for the match, leaving NWC Athletic Director Brian Erickson in charge.

While Erickson briefly led the squad before Hill’s hiring, the coach’s absence could’ve played into the result.

“I think it probably made a little bit of a difference,” Hill said. “I think the girls know how to perform.”

Northwest allowed a goal in both halves and only recorded six shots on goal in the defeat. The Trappers also were given three yellow cards.

“The girls were pretty disappointed with the result,” Hill said.

In the regular-season finale against Casper, however, NWC played one of its best games of the season. The Trappers began the season with a 6-0 drubbing at the hands of Casper but cut the scoreline to just one goal in their second meeting.

They went to the locker room tied 1-1, thanks to what Hill described as a “brilliant” goal from Riley Surratt. She struck a ball into the corner from roughly 35 yards out for the equalizer.

Northwest returned from halftime with the same energy and pushed ahead. Sophomore Kierra Cutright knocked in a header from a corner kick to take a one-goal lead — one the Trappers would hold until late in the match.

However, the Thunderbirds scored with time winding down, sending the match to extra time. In the sudden-death overtime period, Casper’s Sophia Henely played a deflected ball well and hit the back of the net, scoring the golden goal and sealing the team’s win.

Even though NWC was unable to pick up its second win, Hill and his players were more than pleased with the effort for the entire match.

“It was a massive improvement there, and they recognize that,” the coach said. “It was a big effort from them, and we came a long way from 6-0.”

Now that the regular season is complete, NWC will play a Region IX postseason game in Cheyenne, facing Laramie County Community College on Friday. The Golden Eagles are 10-1 this year and ranked No. 6 in the NJCAA rankings.

With a handful of players out due to prior commitments or injuries, the Trappers will be short-staffed. But Hill is confident in his group’s ability to battle in the playoff match.

“Everything tips toward LCCC,” he said, “but we’re going to go in there and fight.”