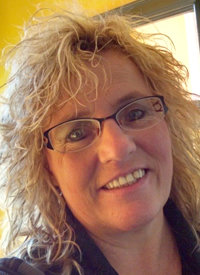 Lisa Joan Howard, 58, of Belle Fourche, South Dakota, died at her home with her family at her side on Jan. 4, 2023, following a long battle with cancer.

She was born Sept. 23, 1964, in Greybull, Wyoming to William “Butch” and JoLynn Sommerville.  Lisa graduated from Worland/Powell High School in 1982.  While in high school she was involved in gymnastics and the swim team.  After high school she was employed at the Cody Nursing Home, then later worked at multiple auto dealerships with her last and currently being Hersruds of Belle Fourche.

In December 1985,  Lisa married Tim Kaufmann and had two children, Rayce and Calynn.  They divorced in 1991.  She moved to South Dakota in October of 1993.  She met Bob Howard, and they were married in May of 1995, and they had a child Brittney.

Lisa enjoyed the outdoors, camping, spending time with family and shopping with the girls when she could.  She also enjoyed her yearly trips with her mother and her Aunt Deanna.

She was a contributor of Disabled Veterans, Make a Wish Foundation, ASPCA and St. Jude Children’s Research Hospital.

She was preceded in death by her grandparents; uncle Jerry Phillips and Aunt Deanna Brenden.

She is survived by her mother and father, Butch and JoLynn Sommerville of Powell: her husband, Bob Howard of Belle Fourche; children, Rayce Kaufmann (Alyssa Padilla) of Texas; Calynn (Jesse) Kling of Spearfish, South Dakota and Brittney Howard of Belle Fourche; grandchildren, Breckyn and Brightyn Kaufmann and Ashlyn Kling; her brother, William (Ronnie) Sommerville of Evanston, Wyoming and nieces and nephews.

A Celebration of Life will be held Saturday, Feb. 18 at 11  a.m. at Studio 621, 621 N Main Street, Spearfish, South Dakota.  Inurnment will take place at a later date at the Donald J. Ruhl Memorial Cemetery in Greybull, Wyoming.

Arrangements are under the care of Kline Funeral Chapel of Belle Fourche.  An online guest book is available at klinefuneralchapel.com.