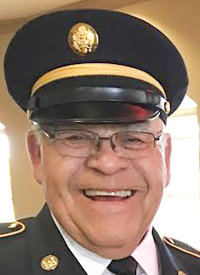 John was born March 28, 1938, in Powell, Wyoming, to Isidro and Rosie Bustos. He graduated in 1957 from Powell High School.  John joined the Wyoming National Guard before he finished high school. In 1961, he went active duty in the Army at Fort Lewis, Washington, during the Berlin Crisis, serving in Germany and Vietnam. After his active duty, he rejoined the Wyoming Guard in 1968.

John worked many jobs before starting work for Texaco Oil, retiring from there when he was 58. However, John’s passion was always serving in the military. Even after retiring from the guard as first sergeant, he started the Powell Veterans Honor Guard to still serve the military in honoring the burial of our deceased veterans.

He also enjoyed traveling to the 11th Armored Cavalry reunions to visit his Vietnam buddies.

John was preceded in death by his parents, and brothers Charlie and Henry. He is survived by brother Phillip, wife Patti and her family, sons Frank, Tyler (Michele), Kelly (Nikki); daughter Theresa (Terry) and 11 grandchildren. He is also survived by special goddaughter Shawn Hubbard and her family.

Thompson Funeral Home is assisting the family and condolences may be sent to them at www.thompsonfuneral.net or P.O. Box 807, Powell, WY 82435.