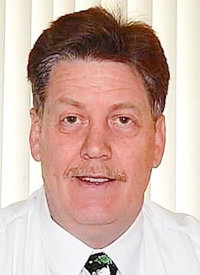 Jerry was called home to his heavenly father unexpectedly on Nov. 1 at his home in Powell, Wyoming.

He was born Feb. 10, 1963, in Billings, Montana, to Judy Adams and biological father Dean Netherton. Jerry was later adopted by his stepfather, Jay Clark, who raised him as his own.

Jerry was raised in Powell and attended the public school system, graduating with the class of 1981. He was an avid swimmer and competed on the swim team, breaking records and setting a higher standard.

Jerry enlisted in the National Guard and the United States Army to serve his country, which he loved, achieving the rank of sergeant during that time. Jerry then attended Northwest Community College in Powell, graduating with a Certificate of Applied Science.

Jerry married Carol Beauchamp in 1986 and acquired son Steven Potter. In 1987, they welcomed daughter Shayla Clark. They relocated to Phoenix, Arizona, and welcomed daughter Kelsy Clark in 1988. They later divorced.

Jerry worked for many years in the communications and electrical industries. Moving back home to Powell, he met Sandra (Holzer) Florez, and they married in May 2000. In this marriage, Jerry acquired son Brian Florez.

Jerry is survived by his wife Sandy of 22 years; his step sons Stephen Potter of Cody and Brian Florez of Gillette; daughters Shayla Clark of Colorado Springs, Colorado, and Kelsy Clark of San Diego, California; grandson Wyatt of Idaho; his biological father, Dean Netherton in Sheridan; his dad, Jay Clark of Ralston; his sister, Denise (Russ) Gwynn of Powell; his half sisters, Michelle (Joe) Foeller, Deanna Netherton and Rikki (Rex) Shaffer, all of Idaho; his grandmother, Winifred Campbell of Lovell; and numerous aunts, uncles, nieces, nephews and cousins.

Funeral services for Jerry will be Nov. 9, 2022, at 10 a.m. at Thompson Funeral Home in Powell. Military services will be held at the Crown Hill Cemetery with lunch to follow at the American Legion.