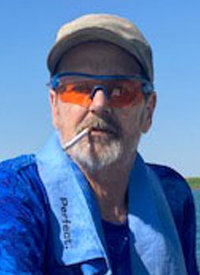 Mike was born on April 26, 1963, to Florence and Russel Edwards in Aurora, Illinois. After graduating from Batavia High School in 1981, Mike moved with his family from Illinois to Wyoming. After a couple years of working odd jobs, Mike met Tavenne Wright in 1982, and they wed May 9, 1984. The couple went on to have two children, Lucas Edwards and Brittney Day.

Mike went on to pursue a career as an electrician where he reached the level of journeyman. He was a force of nature, determined to provide for his family and give them the life he felt they deserved. Mike’s family meant more to him than anything else in the world, something he often mentioned. He was unendingly proud of Lucas, Brittney, and Tavenne, and always tried as best to support them. This continued even after an industrial accident left him disabled.

Mike was also exceptionally proud of his three granddaughters, Tempie Day and Millie and Bridgett Edwards. Watching them grow, play, and enjoy all of their activities brought him tremendous joy. He loved hearing their laughs as he watched them and especially loved being called Papa.

Mike also enjoyed the outdoors and working on projects, and could often be found hunting or working in his garage in his free time.

Anyone who knew Mike knew that he was a loving father, husband and grandpa.

Condolences can be left on Mike’s page at www.BallardFH.com. There will be a memorial service at Ballard Funeral Home at 1 p.m. on Monday, Aug. 8, 2022.