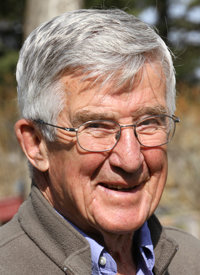 Though Jim was born in Cardston, Alberta, Canada, he came to Cody at a young age when his father raised enough local money to purchase Park Refining Company, soon to become Husky Oil.

In the family tradition of hard work, Jim milked Buttermilk, the cow, before school and sold the Cody Enterprise newspaper about town for 5 cents a copy, never missing an opportunity to stop at Cassie’s and Ida’s on Beck Avenue.

Young life in Cody had its distractions, especially building a fort on Cottonwood Creek with friends Don Kurtz and Kenny Nelson. The sagebrush foothills held strong allure, where Jim would roam with his first horse Buster, purchased from old Henry Westerman at Coe Lodge. With a loan from Shoshone First Bank for Buster, he soon learned about the pitfalls of interest, which helped spark his curiosity and understanding for business.

At the Boy Scout Camp with Reverend Buswell, he honed talents as a woodsman. He became an Eagle Scout and was selected for the Boy Scout Jamboree in Europe at the close of World War II. Boarding a troop ship at the age of 16, he journeyed to Moissan, France, to witness the tragic aftermath of war, the endless crosses at Normandy and a concentration camp in Germany. Near the conclusion of the trip, the scout troop commandeered a bony farm horse, and Jim, dressed in Buffalo Bill’s buckskin lent from the Goodman family, galloped across the Jamboree stadium to the cheering crowd.

After graduating from Cody High School in 1949, Jim attended Cranbrook School along with Al Simpson for a post-graduate year and then enrolled in the University of Wyoming where he graduated from the School of Business in 1954. After Laramie, Jim became a commissioned officer in the supply corps of the U.S. Navy, stationed at Bremerton, Washington, traveling throughout the Pacific.

In 1958, while Jim pursued his career with Husky Oil, by now an internationally integrated oil company, he met Joanne Henry on a blind date. Before long they were married and became a vibrant family of seven with Jim, Julia, John, Jeff and Jay, living at Jim’s beloved Trail Creek Ranch north of Cody. Although they divorced in 1984, Jim and Joanne remained good friends.

Jim was elected president and chief executive officer of Husky Oil in 1973. Husky continued to grow into a major energy company. Jim was the force behind the construction of the new Husky Oil headquarters on Stampede Avenue (currently the Park County Complex). After Husky was acquired by Alberta Gas and Truckline in 1979, Jim resigned, moved to Billings, Montana, where he founded JN Oil and Gas, a privately owned oil and gas exploration and production company of which he was president and CEO.

In 1985, Jim picked up Anne Young for a Kentucky Fried Chicken picnic on Rattlesnake Mountain, an outing that marked the beginning of a long relationship and 30-year marriage. Sage Creek Ranch became their home along with True North, Jim’s family fishing lodge on the Greybull River.

Jim became the founder and CEO of Nielson & Associates in Cody, leaving much more time for family fishing trips to Alaska with his kids, holiday ski gatherings, and adventurous trekking and pack trips with Anne and dear friends. On one trip they bushwhacked over Ramphart’s Pass. Together Jim and Anne maintained a huge gardenful of corn, asparagus, beans and a variety of lettuces and flowers, all amongst the inevitable weeds. At night Jim would scour the garden catalogs in bed to Anne’s protests, ordering every garden gadget and rototiller imaginable.

Jim’s many accomplishments and awards are far too numerous to list. He was most proud to serve on the boards of Y-Tex Corporation, the Wyoming Natural Gas Pipeline Authority, American Petroleum Institute, Rocky Mountain Oil and Gas Association and The Denver Branch of the Kansas City Federal Reserve. He was also a longtime and dedicated member of the board of directors of the Buffalo Bill Center of the West.

His philanthropic causes were many, including special funding to purchase the Paul Dyke Collection for the Plains Indian Museum, the re-start of the Sleeping Giant Ski Area, Heart Mountain Ranch Preserve, the Cody Splash Pad and the University of Wyoming School of Energy. His commitments reflected a strong love of the Cody community and the state of Wyoming. He always wanted kids to appreciate and experience the outdoors as he had.

Jim’s love of his children and grandchildren ran deep, and he especially looked forward to gatherings of all 21 at True North. Winter and summer, they gathered for cutthroat trout fishing, sledding, cards and games of all sorts along with cookouts along the river’s edge where there were plenty of willow sticks for the marshmallows. On quiet occasions, Jim loved watching the elk, moose, and grizzly bears with his eagle eye and trusty scope, looking out at the expansive view.

In his declining years, despite his gradual memory loss, Jim hardly missed a beat. Every morning, after his walk, he was eager to head to his office with briefcase in hand, where he was greeted by his assistant, Cheryl Henry, who had his coffee and Wall Street Journal awaiting him. As he would have wished, his last full day was spent at the office.

Services will be held at Christ Episcopal Church, 825 Simpson Avenue, Cody, Wyoming 82414, Friday, Dec. 2 at 11 a.m., followed by lunch in the parish hall. There will be a private family burial.

Memorial donations may be sent to the Buffalo Bill Center of the West, 720 Sheridan Avenue, Cody, WY 82414, or a charity of your choice.

Memories and condolences can be left on Jim’s memorial page at www.BallardFH.com