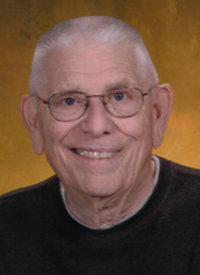 Born Glenn Stewart on Feb. 29, 1936, in Kansas City, Missouri, he was adopted Oct. 9, 1936, by James and Dorothy Crumrine of El Dorado, Kansas. He attended many schools due to his father’s occupation. He graduated from El Dorado High School in 1954, and went to work for Jones and Loughlin, an oil field supply company in Winfield, Kansas.

He met the love of his life, Paula Alt, in Winfield, Kansas. They married on March 3, 1962, in Howard, Kansas. To this union they were blessed with two daughters.

His employment with Jones and Loughlin moved them to Powell in 1966. After a long career with J&L, Jack and Paula opened their family business, Powell Industrial Supply, where they served the Powell community for 30-plus years.

When he wasn’t busy supplying the oil field, he enjoyed golf, and in his later years, pool. He was a member of the Wyoming  Weatherization Service for 10 years. He was also a member of the Elks Lodge for 66 years,  where he held the offices of secretary, tiler and chaplain. In 2020, Jack was recognized as the Outstanding Service Member of Powell Elks Lodge #2303.

He was preceded in death by his parents Dorothy and James; and is survived by his wife, Paula, daughters, Jaclyn (Mike) Borcher and Jamie (Luke) Todd; seven grandchildren and seven great-grandchildren.

A coffee reception will be offered at 1 p.m.  followed by services at the United Methodist Church in Powell on Thursday, Nov. 10, 2022, at 2 p.m. A  private family service will follow at Crown Hill Cemetery. A celebration of life will be at the Elks Lodge after services. In lieu of flowers, the family requests donations be made to the charity of their choice.