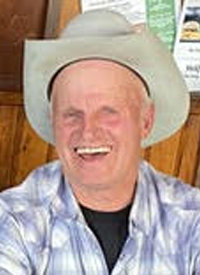 After graduating from Belfry High School in 1967, he joined the military. He served in Vietnam, ending his service there as an E5 Sergeant. His heroism and bravery earned him an Army Commendation Medal and a Bronze Star Medal, among several others. He also spent time in Germany before returning to the states.

Harvey attended college in Laramie, but returned to farming, just a few credits shy of a degree in Animal Science and Agriculture. He was married to Noralee Hoefer for 10 years, and together they had three kids. After divorcing, Harvey spent time in Wyoming, California, Nevada and Hawaii. Whether he was siding houses or working with buffalo, he was always up for whatever came his way. He returned to Clark in the late 90s and lived out the rest of his days in this place that he always called home. The last few years of his life were undoubtedly his happiest, due in large part to his girlfriend Sandi.

Harvey loved an adventure. He loved to hike to Deep Lake. He loved to go gold panning, and he loved to meet new people. He always felt a sense of duty to his country and community, a duty which he fulfilled well. He saved lives in Vietnam, helped out countless neighbors and friends, built several houses in Clark and the surrounding areas, and served as cemetery board president for several years. His work ethic, strength, stamina, and stubbornness was like no other. He rarely saw a cow he didn’t want to buy and never saw a piece of pie he didn’t want to eat. Every good day started out with drinking coffee at Edelweiss. Although, he would always say he didn’t go there for the coffee.

Though small in stature, Harvey made a big impact on this world. We will always remember his bright blue eyes and shining smile. He lived a good life and met a lot of interesting people. (His words, not ours.)

Harvey is survived by his kids, Amy (TJ) Swanson of Belfry, Montana, Ron (Wendy) Willis of Cody, and Jessie (Jeramie) Krum of Belgrade, Montana, Alyssa (Robert) Heppner of Oregon, and Dustin (Taylor) Yost of Nevada; and his sisters Barbara (Dennis) Wegner and Betty (Alan) Skalsky, both of Powell. Harvey has 12 grandkids, one great-grandkid, and several nieces and nephews.

He was preceded in death by his parents, Harvey and Mary Willis, brother John Willis, and granddaughter Meah Krum.