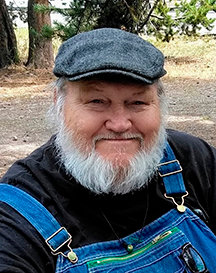 Harold Jesse Meadors, 73, passed away in Lovell, Wyoming, on Nov. 30, 2022, after an extended illness. He was born on Nov. 14, 1949 in Newcastle, Wyoming, to Charles Raymond Meadors and Pauline May Beachler Meadors. The Catholic Nuns at the Newcastle Hospital named him “Butch” which he was known by his family.

He took great pride in being a member of the graduating class of 1968 of Powell Senior High School. He was an active athlete with the PHS football, wrestling and track teams, where he acquired the nickname of “Moby,” by which his community of friends knew him until his death. “Moby” had a gift for autobody work and owned Harold’s Auto Body in Powell. He always joked about being a “grease monkey” and working on “rat rods.”

He will be remembered for his quick wit and talented artistic abilities. He always had a story or a laugh to share with others. “Moby” loved to take drives on photography excursions, capturing the Wyoming wildlife and landscapes. His paintings usually depicted these scenes.

While he was quick to admit he lived an imperfect life, he always loved his friends and family.

“Moby” is survived by the love of his life, wife Laurie Christopherson Coombs. He leaves behind a son, Jess Miller, of Great Falls, Montana, whom he loved dearly, and sisters, Bonita M. Lee and Patricia A. Meadors of Washington. He also leaves behind numerous nieces and nephews.

He was predeceased by his parents and brothers Donald D. Meadors and Robert W. Meadors.

There are no events planned at this time. Memorial services at a later date will be announced.

You may make a donation to Haskell Funeral Home in Lovell, Wyoming, in Harold’s honor, as an alternative to flowers.