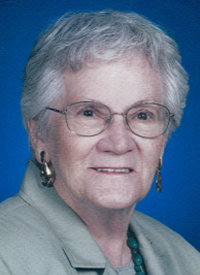 On Monday, July 25, Frances Arlene Straw Dearcorn, 100, went to be with her lord and savior, while being a resident at the Powell Valley Care Center. She was born March 27, 1922, in Halifax Dauphin, Pennsylvania, to Harry Walter Straw and Mary Valera Sheetz.

Frances was the only girl of five children, and after graduating high school, had several jobs. Being a telephone company operator was what she talked about liking the most. It was at this time that she met the love of her life, an Army serviceman, Eugene Dearcorn, at a USO dance on the Susquehanna River in Harrisburg, Pennsylvania, in 1942. After his deployment overseas for three years, he returned in 1945, and they married Sept. 8, 1945, at his mother’s home in Straits Corner, New York.

After spending nearly five years in New York state, with the health issues that mom had, the two of them headed west to Wyoming, where mom’s health improved. She and dad raised four children.

Frances enjoyed, cooking, canning, painting, gardening, playing cards and other games, taking home movies, camping, picnicking, and Sunday drives, along with being a mother and grandmother. She was a 50-plus year member of the First United Methodist Church and enjoyed participating in Bible studies and most all other church activities.

Frances was preceded in death by her husband Eugene, mother, father, and her brothers, Chet, Lee, Byron (infant) and John Straw.

Donations may be made to the charity of your choice. Funeral services will be held at 10 a.m. on Tuesday, Aug. 9, at Thompson Funeral Home, with burial to take place at Crown Hill Cemetery afterwards.