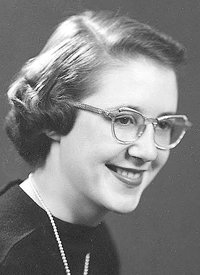 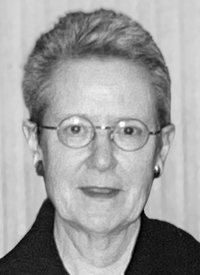 Dolores Woods died of pneumonia at the Billings Clinic the morning of Jan. 4, 2023. She was a resident at Canyon Creek Memory Care for the past five years.

Dolores Jeanette Voorhees was born July 24, 1933, to Bess Lambert and Sydney Chester Voorhees in Sturgis, South Dakota, the last of seven children and the first girl. In celebration, her father, a land assessor, closed the courthouse in Meade County the day she was born. She was lovingly cared for and teased by her brothers and grew up in a rural home with all of them — her parents, her four grandparents, a sister-in-law, and a favorite nephew, Herk, who was born when she was 5.

She graduated from Sturgis High School as salutatorian and attended Jamestown College in North Dakota, studying English. While visiting her brother, Rodney, in Valley City, she met William Montgomery Woods, who was a college student there. They began a romance that included daily correspondence.

Her father insisted she live one year independently before marriage, so Dolores left college to teach sixth grade in the fall of 1953 in Powell, Wyoming. She and Bill were married on June 12, 1954, and after a summer on Lake Metigoshe where she recovered from foodborne hepatitis contracted at the reception, they moved to Carrington, North Dakota, to teach for one year. They returned to Powell where Bill taught biology at Powell High School. Women expecting children were not allowed to be in the classroom; she left public schools to raise their four daughters.

After Bill taught her to boil water, Dolores began to make home with verve, developing into a rigorous home economist, an ambitious and talented cook who baked nine loaves of bread every week (or more) and an excellent seamstress. She sewed toys, home decorations, most of the girls’ fashionable wardrobes, Bill’s shirts, and astonishing quilts. Dolores saw nothing formidable in any of her many pursuits, believing “if you can read, you can cook.” Or sew. Or make paper.

She was rarely idle and could keep her hands knitting even after falling asleep in her chair in the evening. Her self-motivation and discipline were the envy of friends and family. She was the extraordinary creative spirit who remained perpetually organized and productive.

A community servant, she was part of Fine Arts, P.E.O., League of Women Voters and served on the school board from 1994-99. Cornerstones of her life were substitute teaching in Powell Middle School, serving as organist at St. John’s Episcopal Church for 50 years, and teaching piano lessons to hundreds of Powell students, some of whom became her favorite people.

Her home was always filled with a snug place to sit, interesting things to look at, to play with, to read, to listen to, and to laugh about. She worked the crossword daily with sharp No. 2 pencils she stored eraser down. Her intellect and humor were also sharp; she collected close friends with whom she could share these gifts as well as hilarious greeting cards. Coffee was almost always on, or tea, or a cold beer in the perfect glass late in the day.

Dolores read obituaries faithfully. We hope this one had enough good names and is one she would have clipped out to put on the fridge with a Planned Parenthood magnet, next to a New Yorker cartoon and a copy of W.H. Auden’s poem “Funeral Blues.”

Memorials may be made to the Bill and Dolores Woods scholarship at Northwest College in Powell, to honor all those pursuing education in and out of the public school classroom.

A memorial service with piano music is planned for July 24, 2023, her 90th birthday, at St. John’s Episcopal Church.