Troy Bray of Powell has filed to run for state representative, House District 25, setting up a three-way primary contest.

Bray, of Powell, filed with the Secretary of State last week and is … 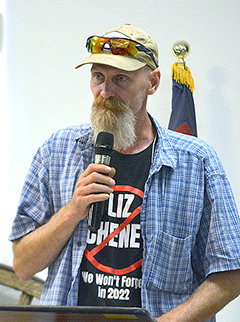 Troy Bray of Powell has filed to run for state representative, House District 25, setting up a three-way primary contest.

Bray, of Powell, filed with the Secretary of State last week and is running against David Northrup and Chris Good. All three candidates filed as Republicans.

The deadline for filing in the August 2022 primary is May 27.

After Laursen told him he was thinking about running for SD19, Bray said he told Laursen he would run for HD25, provided no other qualified conservative candidate chose to run.

Bray explained he decided to run because he does not believe Northrup is a true conservative.

“Northrup is definitely not somebody that I want representing me — his record is horrible,” Bray said, prefacing he does not know enough about Good to offer an opinion of him.

“Conservatives are kind of weird,” Bray said. “We don’t want to tell other people what to do, but that’s what legislators do.”

Bray has been highly critical of state legislators he believes are too liberal to qualify as conservatives.

“This Legislature has been a pathetic mess for two years now,” he stated publicly in March 2022.

Bray stands by that statement, but said not all Wyoming lawmakers are too moderate.

“There are good legislators — we have a few here in Park County,” Bray said. “Laursen has been great. [Rachel Rodriguez] Williams is great. But the leadership in both houses … they could have done great things for the people of Wyoming, but they failed.

“They should have limited the governor’s emergency powers,” he continued. “His COVID response was a huge fail — the biggest failure in the history of Wyoming.”

During the past few years, Bray said the state Legislature had numerous opportunities to fix what he called a “broken system,” but did not produce results.

Bray is particularly critical of Gov. Mark Gordon’s performance, noting the GOP governor has expanded government authority instead of reining it in.

“He had no right to shut down businesses over an over-blown flu,” Bray said, referring to the governor’s actions during the COVID-19 crisis.

Bray explained his perception of a conservative as someone who distinguishes between authority and power.

Referring to himself as a constitutional conservative, Bray said he first became involved in politics to protect the Second Amendment — the right for private citizens to own and bear arms.

Bray emphasized he’s a firm believer in individual rights, particularly when it comes to voters voicing their opinions in public and expressing their concerns to lawmakers.

“The government, they pass a lot of laws that are unconstitutional,” he said. “They pass a law, they implement it, and the state Supreme Court strikes it down. If you break that law, even though it’s unconstitutional, they’ll send cops to your house to kill you. That’s power.”

Although Bray has been in the news lately over controversial issues, including an email he sent to a state lawmaker that many people found inappropriate, Bray said he does not consider his views beyond the realm of many voters in the state.

In fact, some members of the GOP Central Committee attempted to rebuke Bray over a profane email he sent to a lawmaker. The attempt failed and did not discourage Bray from speaking his mind.

“Wyoming is extremely conservative, as far as the individual people are concerned,” Bray said, pointing out that because every candidate self-identifies as a Republican, voters assume they’re conservative, even if they aren’t. In fact, he said, many candidates who run as Republicans in Wyoming are actually Democrats.

In addition to his strong Second Amendment stance and concerns about government overreach and overspending, Bray said he worries about the state’s education system.

“Education is a big thing,” he said. “I have a 16-year-old son, and I’m extremely concerned about his education. I’d like to see a little bit less state control of home-schooling. I’d like to see education redirected … toward the kids in things that actually matter, like math and science.”

Bray made it clear his criticisms are mostly directed toward the state. He has few complaints about local schools or educators.

“Powell has a good school district,” he said. “But they have state standards they’re forced to meet.”

In addition to individual rights and personal liberties, Bray said he believes Wyoming is taking too much money from taxpayers.

“I hate taxes,” he said. “I hate paying any tax. That’s my labor going to a government that misuses it. Powell isn’t too bad. Powell is one of the better places in the state, but I think we could do it with a lot less.”