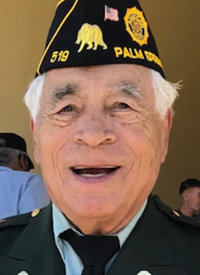 Charles (Charlie) John Bustos, of Henderson, Nevada, and formerly Palm Springs, California, passed away peacefully in his sleep on Sept. 13, 2022, while under the care of Pebble Creek Hospice.

He was born Dec. 19, 1935, in Powell, Wyoming, where he spent nearly the next two decades in elementary, high school and Northwest College. He was the second oldest of four brothers. In 1953 he joined the Army and spent time in Ethiopia. After his military service he began a career in the printing business and later worked in sales for the U.S. Chamber of Commerce, the National Federation of Independent Business and the Better Business Bureau. He married his first wife, Nita, shortly after being honorably discharged from the Army. Three offspring soon joined the family — Mark, Lisa and Chad. After the end of that marriage, Charlie continued to spend as much time as possible with his children — even driving long distances to see them play various sports. In 1990, he met his second wife, Sue. They married in 1999. Charlie loved to dance and was always one of the best on the dance floor. He also loved all sports and played football and wrestled in high school. He later umpired baseball. He especially loved watching his two sons play tennis at a competitive level. Lisa was always his little girl and he was so happy when she and her husband moved back to Palm Springs from Florida.

Charles was preceded in death by his parents, Rosie and Isidro Bustos, and his brother, Henry Bustos. He is survived by his wife, Sue, daughter Lisa Hensley (Ed), son Mark Bustos (Dawn), and son Chad Bustos (Malinda). He is also survived by brothers Phillip Bustos and John Bustos (Patti). In addition, he leaves behind Sue’s children, Staci McIntosh and Shane Nees. Many cousins, nieces and nephews will remember Charlie for his fun personality and love of family. Memorial contributions can be made to any pet rescue or the charity of your choice. A remembrance will be planned in the future.