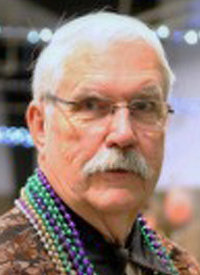 He was born to Herold Richardson and Alice Donnie (Edwards) Richardson on March 18, 1943, in Key West, Florida. His father served in the Navy on submarines. When he shipped out, mother and infant Lynn returned to California where he eventually attended school in Kelseyville, California. The family later moved to Stockton, California, where he graduated from Lincoln High School, San Joaquin Jr. College and graduated from Humboldt State College, Arcata, California, with a degree in Fisheries.

On June 16, 1984, Lynn married Marybeth Goodrich (Mary Elizabeth Crouch) in Modesto, California. They resided in Turlock, Aptos and Placerville, California, before moving to Powell in 1999.

For many years, Lynn worked for Simpson Timber Company, selling timber all around the world. He managed a lumber mill for Simpson and he served on the Arcata Police Reserve Force for a few years. He remained in the lumber industry, including building two lattice panel machines and managing Pioneer Lumber Co in Placerville, California, until moving to Powell, Wyoming. Lynn started Heart Mountain Home Inspections serving the Big Horn Basin for many years. After retiring, he enjoyed playfully pointing out every home he inspected just to irritate his wife.

Shortly after arriving in Wyoming, Lynn was hired as the Maintenance Supervisor at Buffalo Bill State Park, driving from Powell to the Park every day, year-around. While working there, Lynn discovered the old road tracks and was so fascinated about the history that he later plotted a long walking path following the road. The proposal was presented to the State of Wyoming which approved the idea. The project is still going through various departments and may be started in the next couple of years.

While living in Arcata, Lynn was active in the Lions Club, served on the Arcata Chamber of Commerce Board of Directors and was a proud member of the Hoo-Hoo Club (a lumberman’s organization}. He wired many houses in Arcata, designed and built two large homes in the Redwoods.

Lynn always said, “I got to Powell as quick as I could.” He absolutely loved Powell and the surrounding area. He loved to follow old trails and hike various places and when introduced to digital photography started his business, “Wyoming Images by Lynn Richardson.” He loved photographing outdoors and Heart Mountain, which can be seen in most of his landscape pictures. He would get a kick out of hearing that someone saw his pictures on Q2 weather reports. His first lucky picture was the buffaloes walking in a row in the snow, titled “Out of the Mist”.

While living in Powell, Lynn had enjoyed being active in Powell Rotary Club, serving on the board for Friends of the Big Horn Lake, participating as a Chamber Ambassador, Homesteader Museum, Plaza Diane, Lovell Chamber of Commerce, and the Cody Country Camera Club. He was passionate about the historic Lockhart Ranch in the Big Horn National Recreation Park, and he led tours at the ranch for many years. He hand-delivered his bill payments downtown so he could “check on things” and visit his friends.

Lynn was preceded in death by his parents. He is survived by his wife, Marybeth of 38 years; his sister Candee Ragsdale (Therman), nephew T. C. Ragsdale (Nikki) and niece Tracy Ragsdale (Fred Martin), all of North Dakota; from Modesto, California, his sister and brother-in-law, Joan and Denis France, nephews: Kevin (Lisa), Kenny (Katie) and great niece, three-week-old Abby.

Memorial services will be Friday, Sept. 30, at 10 a.m. at Faith Community Church (the little red church on the hill) on Road 18 (Wyo. Highway 294). Thompson Funeral Home is handling the arrangements. Cremation has taken place.

If friends desire, in lieu of flowers, donations could be made to Backpack Blessings of Powell, PO Box 1, Powell, or the Homesteader Museum, PO Box 54, Powell.