Despite controlling the pace of the game for most of Friday’s first half against Lander, the Powell High School boys’ soccer team found themselves leading only 1-0 at halftime. An early … 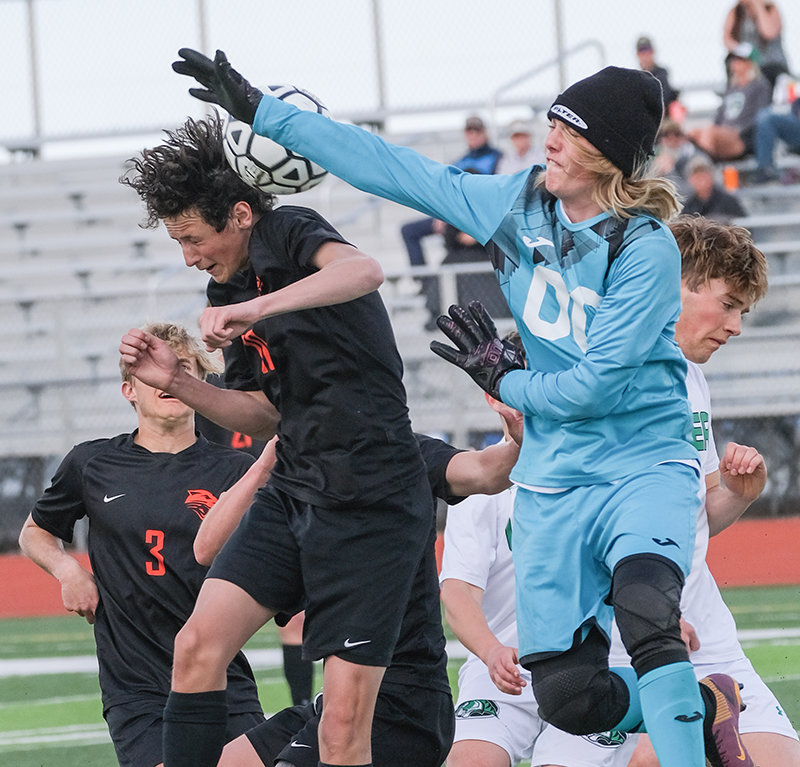 Rising to the occasion, sophomore Gunnar Erickson challenges the Lander keeper on a corner. Erickson later scored on a header as the Panthers used a strong second half to push past No. 3 Lander 5-0 on Friday.
Tribune photo by Seth Romsa 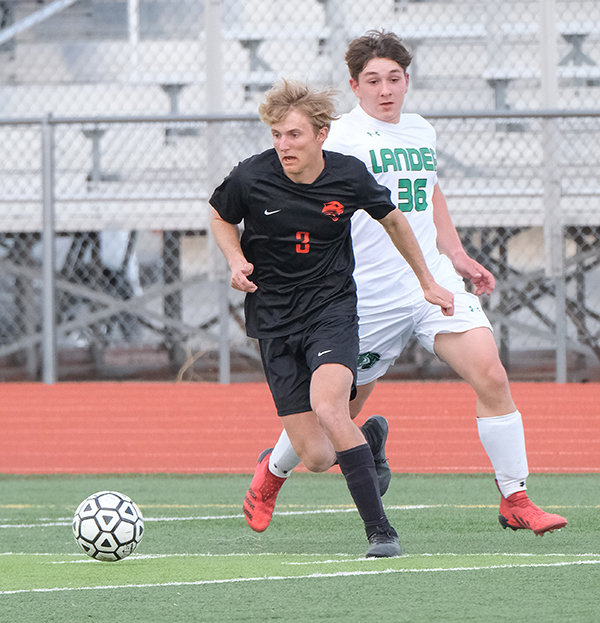 Continuing his scoring streak, senior Keaton Rowton scores in his fourth successive game on Friday against Lander. The Panthers are heading into a break before playing three contests in four days.
Tribune photo by Seth Romsa
Previous Next
Posted Tuesday, April 12, 2022 8:10 am
By Seth Romsa

Despite controlling the pace of the game for most of Friday’s first half against Lander, the Powell High School boys’ soccer team found themselves leading only 1-0 at halftime. An early second half explosion of goals, however, helped the Panthers put away the visiting No. 3 ranked Lander Tigers 5-0 in a key Class 3A West matchup on Friday.

Early on in the contest, the Panthers (7-1 overall, 5-0 in 3A West) controlled the possession through their fast passing and quick touches.

“For me, that was us playing to our potential,” Panther head coach David Gilliatt said.

That possession led to two early chances, but two diving saves by the Lander goalie helped keep the Tigers (3-2 overall, 2-1 3A West) in the contest with the score 0-0.

The first goal came from Lander 25 minutes into the game, but it was called back for an offside decision, allowing the Panthers to breathe a sigh of relief.

After that close call, the Panthers continued to apply the pressure and finally found their breakthrough with 4:34 left in the half: Sophomore Gunnar Erickson finished a corner kick with a header to make it 1-0.

Coming out of halftime, Powell continued to control possession.

With early pressure to the Tiger backline, a pass from junior Cameron Carpenter found senior Hawkin Sweeney on a breakaway. Sweeney slotted it past the Tiger keeper to make it 2-0 six minutes into the half.

It did not take long for Powell to find a third.

Senior Keaton Rowton pushed the ball up the left wing, beat his defender and was fouled in the box to earn a penalty for PHS just a minute later.

Back in the lineup following a foot injury, senior Garrett Morris stepped up to the spot and put it in the back of the net to make it 3-0.

“When you are used to having the same player [Morris] in the same position for four years and not having him it definitely took some adjustment,” Gilliatt said. “What we had as a plan B without Garrett had been working, but having him in there makes our midfield better.”

Rowton got his own goal just minutes later, as his shot from 25 yards out caught the defense by surprise and found the far side of the net to make it 4-0.

Morris added his second goal of the game after a scramble in the box allowed him to poke it past the defense and make it 5-0 with 16:40 left.

With the victory the Panthers have now won four straight contests after their first loss of the season, and have not conceded a goal in any of those games.

“Lander for me is top three in the state,” Gilliatt said. “We played really well, but I still feel like they are a very dangerous team.”

An anticipated No. 1 versus No. 2 rematch with Worland was set for today (Tuesday), but the wintry weather delayed the contest until Monday, April 25, at 6 p.m.

The schedule change will force Powell to play three games in four days.

The Panthers will be idle this week, as they now have two weeks to practice and rest before heading to Lander on Friday, April 22 and Pinedale the following day, before hosting Worland that Monday.

“The main thing we are going to do is stay focused, keep a high level [of intensity] and keep improving with the time we have in practice,” Gilliatt said.