Hard work, dedication and countless hours of practice and competition were honored on May 10 as Panther athletes attended the year-end athletic awards night for the first time in three … 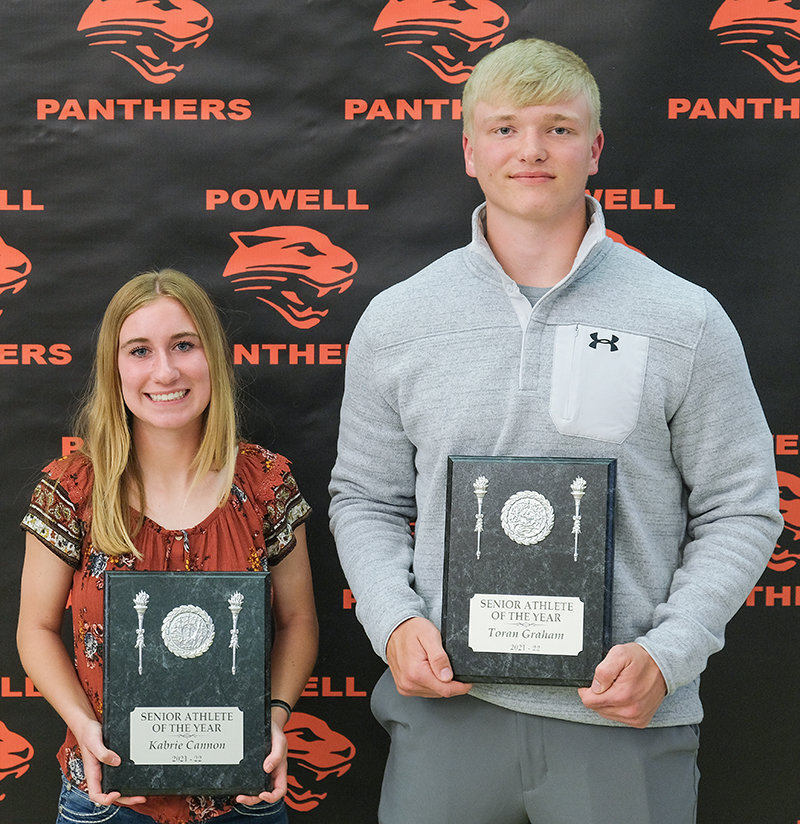 After an outstanding four years at Powell High School, seniors Kabrie Cannon and Toran Graham were recognized as the most Outstanding Senior Athletes in the class of 2022 during an awards banquet on May 10. Graham was also recognized as the 3A/4A Wilford Mower Award winner for the Northwest District.
Tribune photo by Seth Romsa
Posted Thursday, May 26, 2022 8:20 am
By Seth Romsa

Hard work, dedication and countless hours of practice and competition were honored on May 10 as Panther athletes attended the year-end athletic awards night for the first time in three years.

ATHLETES OF THE YEAR

Earning the honor as the Outstanding Senior Female Athlete of the Year was Kabrie Cannon, a two-sport athlete for the Panthers. Cannon participated in both cross country and soccer all four years.

“It meant a lot to me to be given this award,” Cannon said. “There are a lot of good athletes in our grade, so it was an honor to be named this.”

Cannon advanced to the state championships all four years of her cross country career, with a highest placement of 14 her junior year and 10 at regionals that same year, garnering All-Conference honors.

Throughout her soccer career Cannon played as a defender primarily, but moved to defensive midfielder this year.

Over the years Cannon has had numerous coaches and players who have influenced her as an athlete and continued to push her to compete.

“My coaches played a very large part in my high school career,” Cannon said. “They always provided support and inspired me to strengthen my skills in both running and soccer all while focusing on my education.”

Cannon said she developed friendships through both sports that she will cherish. The support from those friendships have meant a lot over the years, she said.

Cannon was also honored with the silver medallion, which is awarded to athletes dependent on the amount of varsity letters accumulated.

Cannon accumulated seven varsity letters but was unable to earn eight because the soccer season was canceled in the 2020 season due to COVID.

What is the one thing Cannon is going to miss now that her high school career is over?

“I am going to miss being part of a team that I would consider my second family,” Cannon said.

The Outstanding Senior Male Athlete of the Year was Toran Graham, a three-sport athlete for the Panthers who participatd in football, basketball, and track and field.

In addition to being named the outstanding athlete at PHS, Graham was named the Wilford Mower Award winner.

This award is given to the top male and female athletes in both the 1A/2A classes and 3A/4A classes in the Northwest District.

Graham is the first award recipient from Powell since Riley Stringer in 2015.

“It is really exciting and I am happy that I am able to come as far as I have made it,” Graham said.

During his time in the football program at PHS, Graham recorded 261 tackles, 25 tackles for loss, six sacks, two interceptions and one fumble recovery.

He was named to the Super 25 team two years in a row in 2021 and 2022, was a two time All-State selection and the co-defensive player of the year in his senior season.

Graham then took his talent to the basketball court as a presence down low for the Panthers.

He finished the season with all conference honors, finishing with 233 points, 201 rebounds while shooting 60% from the field. Those numbers helped lead the Panthers to a semifinal berth at the state tournament.

Graham was not finished, as he placed second in the shot put for the Panthers at the state meet and fourth in the discus to help lead Powell to a third place finish in Casper this past weekend.

With his career near its end Graham was thankful for all the hours he put in and how much time his teammates and coaches put in to help him.

“I would not be able to be recognized for any of these accomplishments without my coaches,” Graham said. “There have been so many hours, and it has been so fun along the way. My teammates have helped me more than they will ever know and I am so grateful for that.”

Graham said he is going to miss the atmosphere that his fellow students and teammates bring to each event in Powell, and the support he has received throughout the years in Powell.

Graham was also the lone recipient of a gold medallion at the banquet.

The senior class was honored for multiple awards alongside Graham and Cannon at the event.

Starting off the awards were Reagan Thompson and Ethan Bartholomew, who received the U.S. Army Reserve Scholar Athlete award.

Thompson competed on the track team throughout her time in Powell, and Bartholomew participated in tennis and track.

Shoopman participated in football and track during his time in Powell, and Urbach competed in track and basketball.

The Gerald Sleep Most Inspirational athletes of the year were Kaili Wisniewski and Riley Schiller.

Wisniewski competed in tennis and basketball while Schiller competed in cross country, swimming and track.

Hillman competed in track for the Panthers and Ratcliff competed in football, basketball and track.

Wisniewski was the sole recipient of a bronze medallion for the girls.

Cole Frank, Schiller and Hawkin Sweeney received a silver medallion for the boys.

Kylie Kahl was the other silver medallion recipient for the girls.

In volleyball the most valuable was Addy Thorington, most improved went to Megan Jacobsen and Anna Bartholomew, with Maci Borders receiving the most inspirational.

The most valuable golfers were Gunnar Erickson and Megan McDaniel. The most improved was Evan Staidle and the most inspirational was Seth Siebert.

Nate Johnston was the most valuable swimmer, and Caden Sherman was both the most improved and most inspirational swimmer.