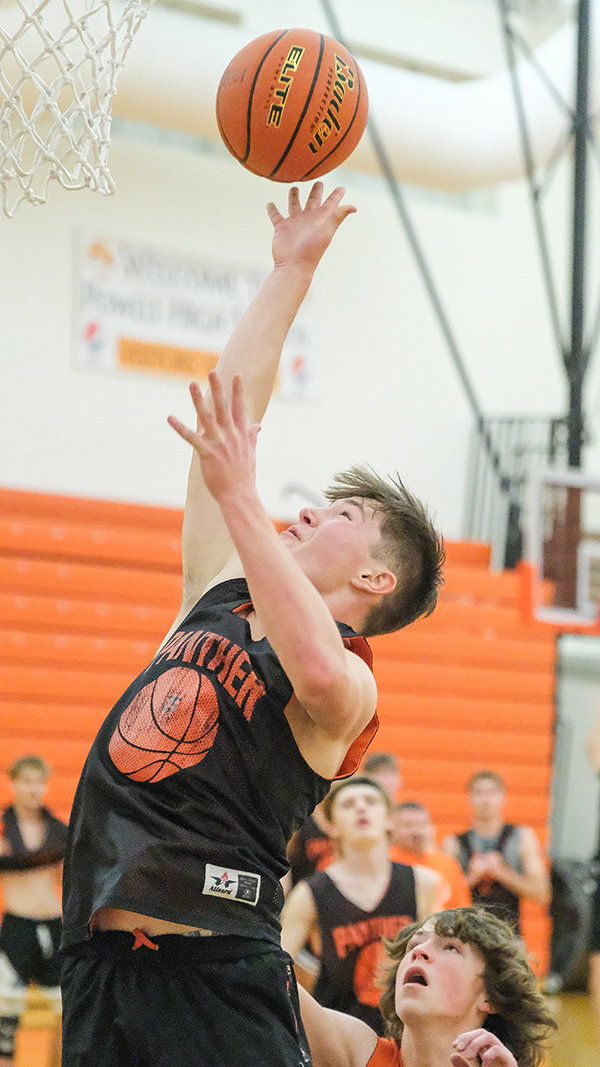 Jhett Schwahn finishes in the lane during a scrimmage on Thursday. Schwahn and the Panthers open up the season at the Strannigan Tournament in Lander this weekend.
Tribune photo by Seth Romsa 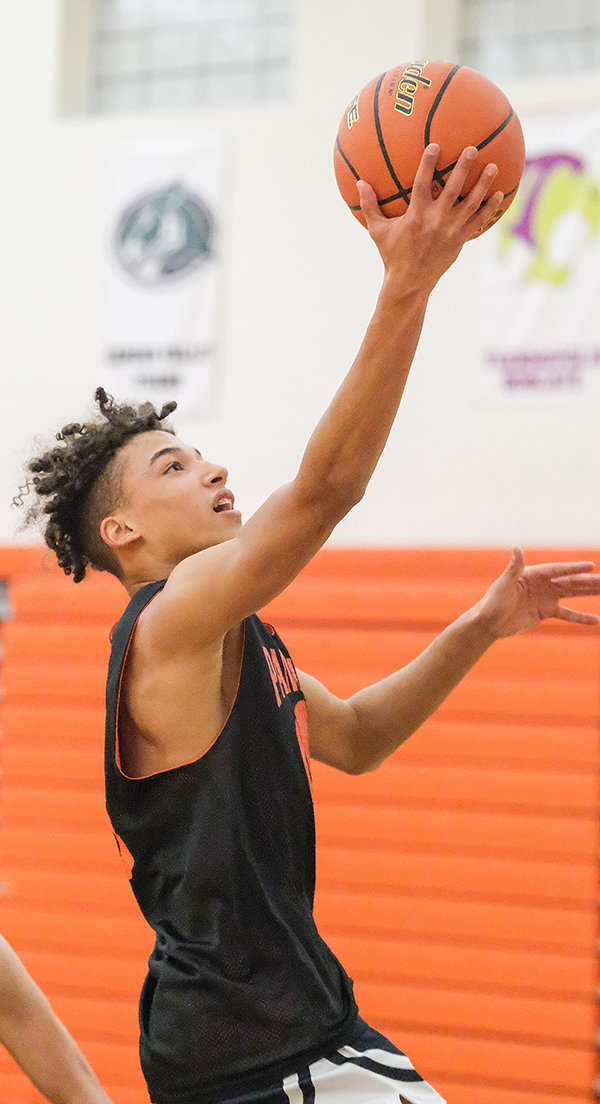 Alex Jordan finishes a layup on the fast break. Jordan and his fellow sophomores expect to be in the mix for the Panthers this upcoming season.
Tribune photo by Seth Romsa
Previous Next
Posted Tuesday, December 6, 2022 8:20 am
By Seth Romsa

A new season brings another opportunity for the Powell High School boys’ basketball team to prove it belongs with the best and set high goals for a team seeking its first state title since 1998.

Those two were the team’s leading scorers last season, with Johnson averaging 12.9 points per game while Erickson averaged 12.1 per contest.

The three starters and four seniors the Panthers lost to graduation accounted for just over 40% of the scoring for the team.

“We are definitely going to have a new rotation,” coach Mike Heny said. “The advantage we have is that this big junior group has played together so long through travel ball. Each one of them brings in an element that we lost last year.”

The 2021-22 version of the team came on strong at the end of the season, winning the regional championship in Powell while advancing to the state semifinals before finishing fourth at state.

This year’s team is expected to have up to 10 Panthers competing for playing time, with Jace Hyde being the only senior on the 24-man roster.

Alongside Hyde and a strong junior class that will have eight players returning with varsity experience from last season, a strong sophomore class is expected to be in the mix for playing time.

“We are going to be young and inexperienced at times, but we are returning an All-State guy in Brock — Gunnar is right there and is going to have a breakout year for us I feel,” Heny said.

This year’s edition of the Panthers will focus on a fast-paced, spread-out offense due to the lack of one significantly tall player on the team.

Powell does not lack in size overall as a team, but the team ranges from 6-feet up to 6-feet-3-inches.

“We don’t have really tall kids here,” Heny said. “I like our skillset, we are going to force people to guard us in the entire halfcourt. Teams aren’t going to be able to zone us, and defensively we have a good core of toughness in Cade [Queen], Jhett [Schwahn] and Trey [Stenerson], who is our tallest guy now. They give us an inside presence where we can battle.”

A lack of rebounding may be a concern for the team heading into the season, as the Panthers lost leading rebounder and All-Conference selection Toran Graham who led the way with 7.4 rebounds a game.

Heny said there is not a ton of concern should the team not entirely gel early in the season, as the Panthers had many struggles last season early on before going on a run from late January into March.

“Postseason success is hard to come by and invaluable,” Heny said. “There is nothing you can do to replicate that until they get to a state tournament. We came out really good against Thermopolis and had Douglas down at the half. Those are experiences you cannot reproduce at any point.”

Powell heads out on the road to start the year, making the trek to Lander to take part in the Strannigan Tournament.

“Early on in the season it’s all about finding the rotations that are going to work, where guys need to be in certain rotations and the subs early on will probably be going deeper into our bench at this first tournament,” Heny said.

The Panthers start the season against conference opponent Lander, who is now competing in the 3A Southwest.

That game is set for 7:30 p.m. Thursday night at the Lander Valley High School gym.

Powell then turns around on Friday morning, when an early season test will come from 4A opponent Laramie at 11:30 a.m. in the Lander auxiliary gym.

The weekend wraps up on Saturday against another 3A Southwest opponent in Pinedale at 10:30 a.m. in the Lander auxiliary gym.

The Panthers enter this season ranked No. 4 by the WyoPreps Coaches & Media Boys Basketball Preseason poll behind Douglas, Worland and Buffalo.

“Each and every year we as a staff don’t focus on wins and losses, we always have the goal of being our best at the end,” Heny said. “We want to compete for a state title, you have to adjust based on your personnel down or up. I have watched these guys grow, and I like to think we have as good a shot as anybody to be playing on Saturday afternoon in Casper.”