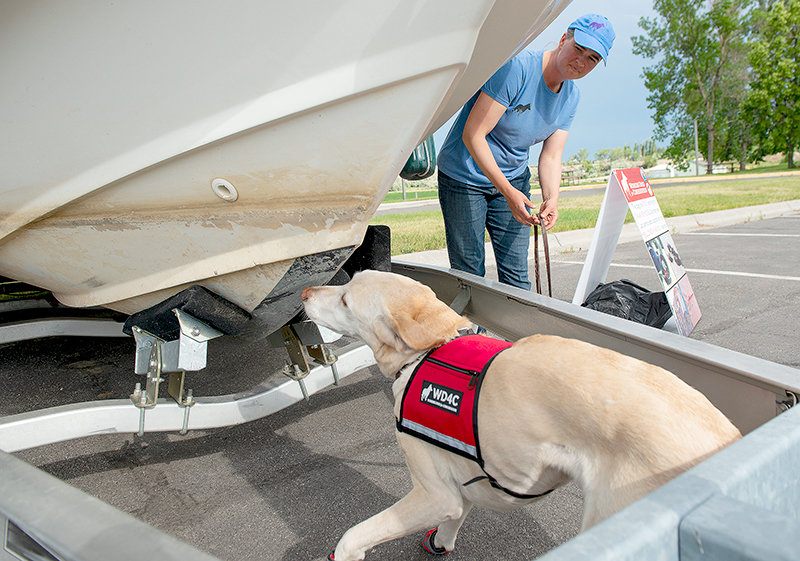 Aimee Hurt of Working Dogs for Conservation guides Lily, a rescue pup-turned-conservation tool, while doing a test search for zebra mussels at the Bighorn Canyon National Recreation Area Visitor Center in Lovell in 2019. Hurt and two conservation dogs were in the park for two weeks to help educate visitors about the devastating effects of the invasive species.
Tribune file photo by Mark Davis 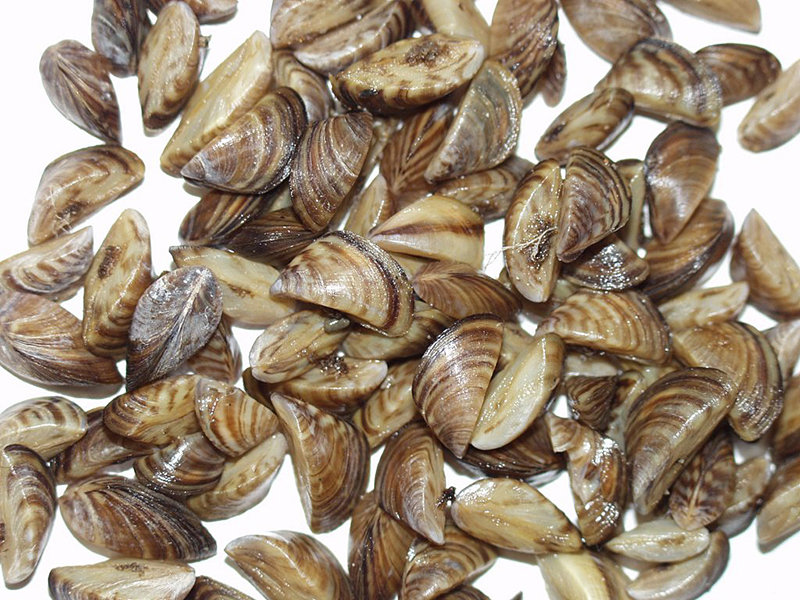 Zebra mussels are an invasive, fingernail-sized mollusk that is native to fresh waters in Eurasia. Their name comes from the dark, zig-zagged stripes on each shell. First arriving in the U.S. in the 1980s, the species negatively impacts ecosystems in many ways.
Photo courtesy Wyoming Game and Fish
Previous Next
Posted Thursday, September 22, 2022 8:25 am
By Mark Davis

The Wyoming Game and Fish Commission is considering banning boats coming to the state from South Dakota and has already banned boating in a reservoir near Newcastle in an outright war against zebra mussels and other aquatic invasive species. If the destructive species gets a foothold, zebra mussels could devastate infrastructure, drinking water, irrigation systems, and hydroelectric and industrial cooling systems. It could also cost millions to mitigate the damage in the cowboy state.

“We received an image of a possible zebra mussel that had been found on a pair of sunglasses while an individual was spear fishing in Pactola Reservoir,” said South Dakota Aquatic Invasive Species Coordinator Tanner Davis in a recent report on the state’s website. “Upon further investigation via water sampling by [the Bureau of Reclamation], free-swimming zebra mussel larvae, called veligers, were found in two of the four samples collected.”

South Dakota doesn’t have adequate testing capabilities, trained staff or a rapid response team to deal with the issue, according to Alan Osterland, Game and Fish chief of fisheries, as he spoke to the commission during their meeting in Buffalo last week. Wyoming spends close to $1.5 million a year on AIS responses, four or five times the amount on their program versus South Dakota and has received commitments from the commission for more help as needed.

Some South Dakota residents are also skeptical of their state’s response to the infestation.

South Dakota is largely counting on educational efforts, according to Osterland, rather than the front-line defenses Wyoming is funding with millions in outdoor enthusiasts’ dollars.

“[South Dakota’s] response, in our opinion, has been pretty hands off,” he said.

The neighboring state, known for amazing fishing and hunting opportunities, has a limited capacity to effectively contain infestations, or perform extra inspections, Osterland said. They don’t have a rapid response plan despite the likelihood of future infestations in the state.

Here at home, Game and Fish has set up check stations at every major artery entering the state, additional check stations in priority areas and hired more inspectors to try to fill the gaps as the workload at these stations increased dramatically after being notified about the mussels in western South Dakota.

“South Dakota Game, Fish & Parks is taking the infestation very seriously and working diligently to educate users and mitigate the spread of zebra mussels at Pactola Reservoir. We have transitioned to exit inspections and are decontaminating all watercraft with aquatic invasive species present upon inspection. [The department] has increased efforts on Pactola since the detection of zebra mussels in the reservoir by reallocating staff to help facilitate a continued seven-day (10 hour per day) approach at inspection stations through the main boating season.”

They’re getting help from neighbors. Since the detection of zebra mussels in Pactola Reservoir, the department has been involved in multiple coordination meetings with neighboring states and federal entities to help slow the infestation, Davis said.

Montana AIS staff assisted with inspections this past week to help fill gaps in scheduling and aided in decontaminations. The state has reported it could cost about $500 million in lost revenue, property damage and mitigation expenses if zebra mussels get established there. Wyoming hasn’t made a cost estimate at this point, according to an official with Game and Fish.

The National Forest Service relocated a strike team from Nebraska and Colorado to temporarily aid in inspections. And Wyoming has volunteered to aid in any decontaminations if boats are headed to Wyoming and coordination has been in place if their help is needed at their Beulah watercraft inspection station across state lines. Wyoming, which has its own lab for testing, has also volunteered to help with additional water sampling if deemed necessary, he said.

Davis said the state has ramped up inspections, but staffing continues to be a struggle with “several locations involving remote work.”

“A number of advertised positions remained vacant due to a lack of applications across the state,” he said in a Tuesday interview.

Currently, any boat coming into Wyoming from South Dakota has to be decontaminated, which is a time consuming pursuit.

“We knew that the zebra mussels have been migrating up to Missouri [River] for a while, and then jumping to different bodies of water in the eastern part of South Dakota,” Osterland said. “But we hadn’t seen anything this far west prior to this discovery.”

After looking at data from Wyoming inspections, he showed how boats coming to Wyoming frequently head to popular Wyoming fisheries, including those in Park County, and points further west.

“Since January of 2020, Wyoming has inspected 174 boats used on Pactola [Reservoir]. And of those 174, 136 were destined to Wyoming waters,” the former Cody Region Wildlife Supervisor said.

Despite the efforts, it may be just a matter of time before the species is discovered here thanks to efforts to skirt AIS check stations.

“We know there are people that are picking their hours of the day to go back and forth to avoid check stations. We know that’s occurring,” Game and Fish director Brian Nesvik said. “Most people want to do the right thing. They don’t want to be the person who brought something bad to our state, but it only takes one.”

Everything is on the table right now, including banning boats from traveling to the state from South Dakota.

“Is there any consideration to banning South Dakota boats in the short term? Or is that too extreme?” Dube asked.

“It’s an option that has to be on the table,” Nesvik responded. “I think that’s one of those hard decisions we need to consider.”

The commission is backing all efforts by the department, including sending help, Osterland said. But Wyoming’s defenses come first, Nesvik said.

“We’re willing to help South Dakota out as well. But our first line has to be our border. We have to be able to put our resources there first, and then help out with South Dakota,” he said.

Nesvik warned commissioners there’s going to be some controversial decisions for the state to make, “but they’re going to be necessary.”

“This is going to be elevated up to the highest levels, because it’s going to have that kind of a political effect,” he said. “I believe the restrictions we’re going to talk about are going to be significant.”

“I don’t think most people understand the consequences,” said Commission President Kenneth Roberts, of Kemmerer. “We’ve done such a good job to this point. Don’t let us encumber you in any way, if you need something, be bold,” he said.

• Clean watercraft and trailers of all aquatic plants and mud.

• Drain all water by removing all drains, plugs, bailers, or valves that retain water. Be sure to completely drain your lower unit of any water by lowering completely.

• Dry all equipment that has made contact with the water before its next use.

Fees collected for the AIS decal will be used to fund the AIS program in Wyoming along with Game and Fish generated license sale funds. These fees will pay for outreach and education, watercraft inspections, and monitoring to prevent the spread of AIS into Wyoming.