Wyoming GOP votes to rebuke lawmakers rather than Powell committeeman

But they did criticize Sen. Larry Hicks for a …

Wyoming GOP votes to rebuke lawmakers rather than Powell committeeman 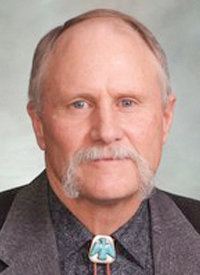 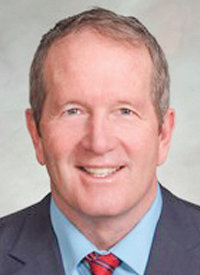 But they did criticize Sen. Larry Hicks for a strongly worded email in which he expressed his displeasure with Park County Precinct Committeeman Troy Bray.

At the same meeting in Buffalo, party leaders chastised Rep. Steve Harshman, the former Speaker of the House, for an unrelated incident in which he was caught on a hot mic cursing Rep. Chuck Gray.

“Senator Larry Hicks and Representative Steve Harshman, while in their official capacity, acted in an unacceptable and uncouth manner toward a fellow member of the Wyoming Republican Party,” one resolution read.

While the two incidents were separate, debate on one led to action on the other.

Leadership voted to remove Bray’s name from a draft resolution written to censure him and revise it into a condemnation of Hicks and Harshman. They also recommended county-level Republican leaders take further action against both men.

During the meeting in Buffalo, Laramie County Republican Party representatives introduced a resolution to censure Bray for his email to Nethercott. In the Sept. 12 email, Bray criticized Nethercott’s handling of a bill that died in the 2021 general legislative session that would have prohibited the state from requiring COVID-19 vaccines.

“If I were as despicable a person as you, I would kill myself to rid the world of myself. You sicken me. Thank you for ensuring that the people of Wyoming are subjected to tyranny once again. F— YOU C—,” Bray’s email finished.

“We took this issue, and we gave it to a gentleman cowboy from Park County and said that it’s your county, you handle it, [county party chairman] Martin Kimmet, and he did,” Dave Holland, vice chairman of the state Republican Party, said at the central committee meeting. “That issue was dealt with properly.”

Members of the crowd applauded, according to a recording of the meeting.

Leaders of the Park County Republican Party ultimately chose not to take action against Bray when they considered the matter in early October. The Park County GOP Central Committee rejected a motion that would have asked Bray to resign, then narrowly voted down a motion to censure him.

At the recent meeting, GOP leaders turned their attention from Bray to Nethercott.

“That individual is the one who made that letter public,” Holland said, referring to Nethercott. “It was her choice to make the letter public.”

The Star-Tribune, which broke the story about Bray’s email, did not obtain the document from Nethercott, nor did the Powell Tribune, which also reported on the message. The senator has not responded to interview requests on the topic.

Carbon County GOP Chairman Joey Correnti made a motion to remove all language in the resolution referring to Bray, drawing hollers and whistles from the crowd.

“We could leave him [Bray] in, but it’s pointless, because the action’s already been had,” Correnti said at the meeting. His motion eventually passed, but the Laramie County GOP tried to push back.

“We, as the state central committee, can say what is in the best interest of the Republican Party, and so what I’m asking you to do is to consider Troy Bray’s actions as not in the best interest of the Wyoming Republican Party, and to make a statement saying such,” said Ben Sherman, state committeeman for the Laramie GOP. “Those statements are something that we, as a Republican Party, need to address and need to say that we do not condone another individual stating that ‘If I were as despicable a person as you, I would kill myself to rid myself to rid the world of myself’ given what is happening in our state and our suicide problem right now.”

Bray’s name was then replaced with Harshman’s and Hicks’. The central committee passed the amended resolution, recommending “that the Carbon County and Natrona County Republican Parties set their agenda for their next regularly scheduled meeting to include discussion and debate on proper disciplinary considerations in regard to the actions of Senator Larry Hicks and Representative Steve Harshman respectively.”

Harshman, R-Casper, and Hicks, R-Baggs, were addressed in the same resolution, but the actions that led to it were separate.

In mid-October, Hicks received an email from Steve Bray, a former candidate for state house. He apparently thought the email was sent by Troy Bray, and sent a response to that effect.

“Please remove me from your email list. Given your pass [sic] history of obscenity laced unwanted attacks on members of the legislature there is absolutely nothing of any value that you have to say that I am interested in hearing,” Hicks wrote. “I do not represent you and I sure as hell do not have any respect for your past despicable behavior.”

Hicks’ response found its way to Sen. Anthony Bouchard, R-Cheyenne, who shared it with the entire Legislature, according to a copy of the email obtained by the Star-Tribune.

“Since the concern that was raised had to do with the language and decorum of Senator Hicks‘ letter, I felt it only appropriate to amend the resolution to include every individual [who] is elected on a public ballot who is currently causing any concern with their language,” Correnti said. “I personally don’t see anything that Senator Hicks said or did rising to the level of even getting the amount of attention it has already.”

Hicks told the Star-Tribune he was not notified by his county party or the state party about what transpired at the state GOP meeting.

“Clearly, there’s a different moral imperative applied to the different cases,” Hicks said of his email and Troy Bray’s email. “I do believe that the people in the state of Wyoming will figure that one out for themselves. It also diminishes the importance and the belief of the party itself when there’s gross inconsistencies.”

Harshman’s name, meanwhile, came up in a second resolution discussed late on Saturday.

During the special session, Harshman, who was participating over Zoom, accidentally left his mic on when using derogatory language toward Gray, a fellow Casper representative. “Chuck Gray, f— [inaudible],” Harshman was caught saying. “Little f— [inaudible].”

Harshman apologized the following day and Speaker Eric Barlow, R-Gillette, revoked his privileges to participate remotely in the session. Another lawmaker signaled that he would ask his colleagues to censure Harshman sometime the following week, but eventually changed his mind.

The resolution passed by the central committee recommends that Harshman either resign or be removed from his leadership position on the House Revenue Committee.

“Representative Harshman, a Wyoming educator by trade, not only violated House rules with his profanity laced tirade, he failed to rise to any level of professionalism, which was displayed for all humanity to witness, including Wyoming’s school age children,” the resolution read, saying the party strongly condemns Harshman’s “vulgar use of profanity against another House colleague and for his blatant disrespect for the people’s house.”

Kimberly Walker, state committeewoman for the Natrona County GOP, tried to table the resolution until the next meeting, but that attempt failed.

“They put this together at the very last minute,” Walker said, adding, “So many of the tables were half empty. I almost feel like it wasn’t due process.”