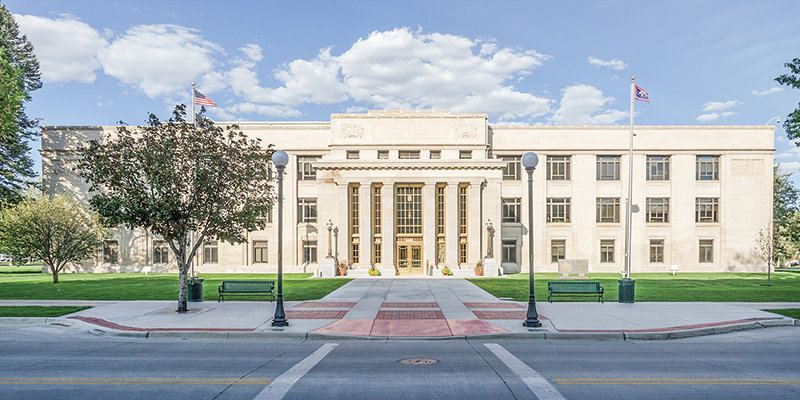 For the time being, the state’s new chancery court will operate out of the Wyoming Supreme Court building, but it will eventually move into a new courtroom in Casper.
Photo courtesy DXR, via Wikipedia
Posted Tuesday, December 7, 2021 8:00 am
By Ellen Gerst, Casper Star-Tribune Via Wyoming News Exchange

For now, three district court judges will take on chancery cases in addition to their existing caseloads while the state finds someone to appoint as a full-time chancery court judge in 2023.

Wednesday’s release said that Judges John Fenn of Wyoming’s fourth district, Richard Lavery from the third district and Steven Sharpe in the first district have experience in business litigation.

Once that judge is named, the court will move into a courtroom in the new Thyra Thomson State Office Building in Casper, which is set to begin opening in February.

Until then, it’ll operate out of the State Supreme Court building in Cheyenne.

The goal of the court, laid out by the legislation passed in 2019 creating it, is to resolve business, commercial and trust cases within 150 days. Less time in court also means less money spent by the state on each case, said Benjamin Burningham, the court’s chief counsel and director.

While criminal cases are already statutorily required to be brought to trial within 180 days of arraignment, business disputes can drag on much longer.

It’s hard to say exactly how long those cases have historically taken in other Wyoming courts, Fox said, since every case is different. Fox said it’s also too early to say definitively which cases will be taken by the chancery court. With none filed yet, the judges have yet to establish a precedent.

But the rules laid out for the court dictate that it will take cases with amounts over $50,000 at issue that are related to contract or insurance issues, commercial code or class actions, internal conflicts or trust disputes.

“We are anxiously awaiting that first filing,” Fox said. “It will be the first e-filing in any court other than the [Wyoming] Supreme Court, that’s an exciting thing in itself.”

The court will also be the first one to rely on the state’s new electronic filing system.

According to Wednesday’s release, the rollout of e-filing in chancery court should help inform the rest of the state’s judicial bodies as they begin to adopt the system. Burningham said Wednesday that he hopes having a forum specifically for business issues in Wyoming will help the state’s push to attract companies dealing with digital assets like cryptocurrency.

Eventually, with judges who can focus on business issues and develop expertise in areas like blockchain and crypto, Burningham said the hope is business owners are drawn to the state’s efficiency in those cases.