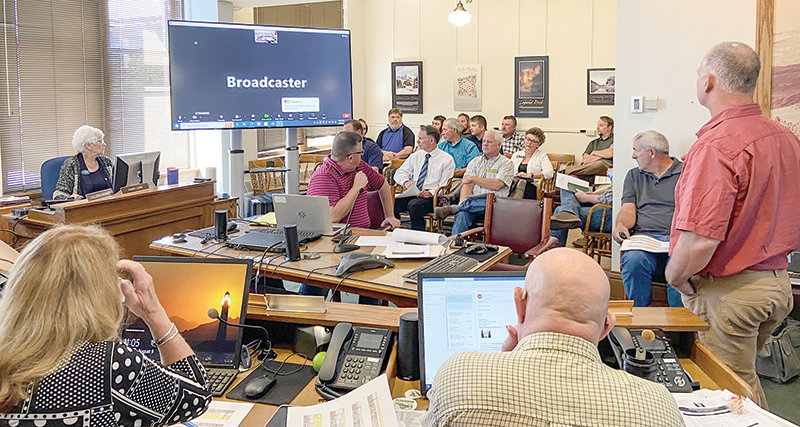 The Wyoming Department of Transportation is preparing to plow the Beartooth Highway from Pilot Creek to Cooke City to ensure access to the Yellowstone National Park gateway community until the Northeast Entrance road is repaired.

That road is popular for snowmobilers to use in the winter months, but at this point the popular stretch may not be impacted by the time snowmobilers use it. Oftedal Construction Inc. plans to be finished with work to reopen the road from Cooke City into the park by Oct. 15, according to a park release. The contractor is repairing sections of the road damaged during the flooding in June.

“As it stands right now, we will be plowing until the road reopens from the Northeast Gate to Mammoth,” WYDOT spokesman Cody Beers said. “It’s the right thing to do, we’re not going to let people in Cooke City be stranded, be on an island.”

WYDOT district supervisor Pete Hallsten announced the plan Tuesday at a Park County Commissioners meeting. The annual State Transportation Improvement Program meeting included an overview of planned projects by WYDOT in the region, including talks by a variety of WYDOT staff and attended by officials with the cities of Cody and Powell and both school districts.

The meeting was part of the phase for receiving public comment, which can also be made at dot.state.wy.us/home.html.

“Oftedal is just getting started on rebuilding the roads from Tower Junction up to the Northeast Gate,” he said. “So now it’s the plan that we may be doing some plowing all the way up into Montana to maintain access to the city. We’ll see what that looks like throughout the winter.”

Hallsten said Wyoming Gov. Mark Gordon and Montana Gov. Greg Gianforte also had discussions on the matter, as the Beartooth Highway runs through Wyoming and Montana.

WYDOT is also investigating what parking lots snowmobilers could use so they would be able to ride in the Beartooths on the traditional trails that have made the area a popular one for snowmobilers locally and across the U.S.

• WYDOT is planning to finish up its work on WYO 294 between Ralston and nearly 10 miles into Badger Basin in FY23, which will include milling, overlay, chip seal and guardrail work.

• In FY2025, WYDOT is planning to add a right turn lane on the Powell Highway at Road 2AB.

• In FY2026, WYDOT is planning to do milling, overlay work and other improvements on the Powell Highway between Blair’s and Ralston. WYDOT resident engineer Todd Frost said that stretch of road is already roughly 20 years old.