Wrestling takes down No. 4

Starting its season on the road for the next two months the No. 17-ranked Trapper wrestling team made its way to Rock Springs to take on No. 4-ranked Northwest Kansas Tech and walked away with a …

Wrestling takes down No. 4 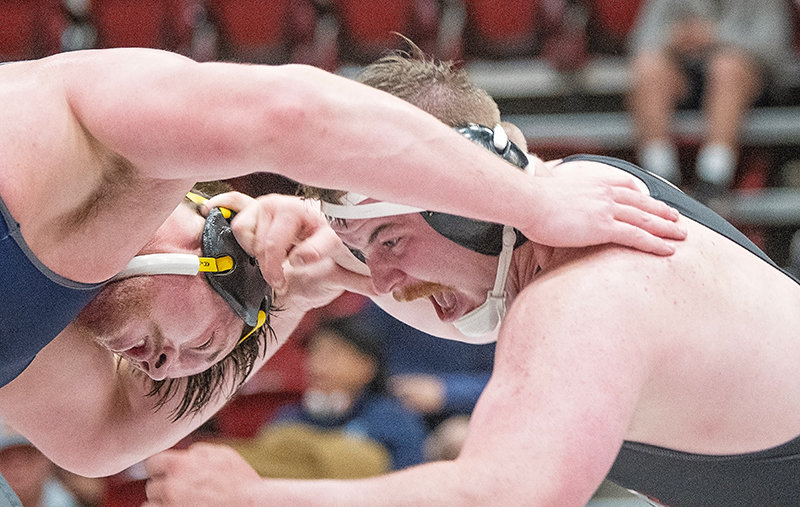 Cody Pinkerton (right) battles during the Joe Mickelson Memorial Wrestling Open on Nov. 5. The Trappers went on the road and took down No. 4-ranked Northwest Kansas Tech on Nov. 10 in Rock Springs.
Tribune photo by Carla Wensky
Posted Thursday, November 17, 2022 8:25 am
By Seth Romsa

Starting its season on the road for the next two months the No. 17-ranked Trapper wrestling team made its way to Rock Springs to take on No. 4-ranked Northwest Kansas Tech and walked away with a 28-21 victory.

“It has been awhile since we have been able to field a full team and be competitive,” coach Jim Zeigler said. “This wrestling program has been through a lot, to go down there and wrestle as a unit was extremely exciting.”

At 149 pounds Jake Olsen was pinned to give Northwest Kansas the lead back 12-9 and Gus Harrison lost a 7-4 decision to extend the deficit out to 15-9.

Cody Todd lost by fall at 184 pounds before Ryker Blackburn earned a pin at 197 pounds and Cody Pinkerton won by fall at heavyweight to give the Trappers a 28-21 victory.

Harrison and Blackburn were making their debuts this season, and Zeigler is hoping early rust can be shaken off.

“Gus struggled, he did not wrestle well,” Zeigler said. “Ryker wrestled fine but he is coming off an ACL injury last spring.”

He said those two will participate in the pair of duals set to take place Thursday (tonight) in Sterling, Colorado, against Northeastern Junior College and Chadron State College.

Those two will not compete in the University of Nebraska Kearney Open on Saturday, but he expects each athlete who is fully available to compete in the tournament.

Following the tournament Zeigler said he will be giving the athletes Thanksgiving week off to recover both physically and mentally from the stresses of an event-filled first semester.

He said they will return ready to compete in several duals and a tournament after the break, but will primarily be focusing on final exams before preparing for the most important stretch of the season in January and February.

“The thing that I am most proud about from this trip that was very evident to me was the closeness of this team,” Zeigler said. “They wrestle hard for each other. What happened up on that mountain revealed a lot about this team and how we care about each other. The lengths we will go to for each other and they are embracing that.”