Kelly Spiering, the Land Use Plan Advisory Committee representative for agriculture, said the worries about water and the loss of farmland have been the big issues people have talked to him about … 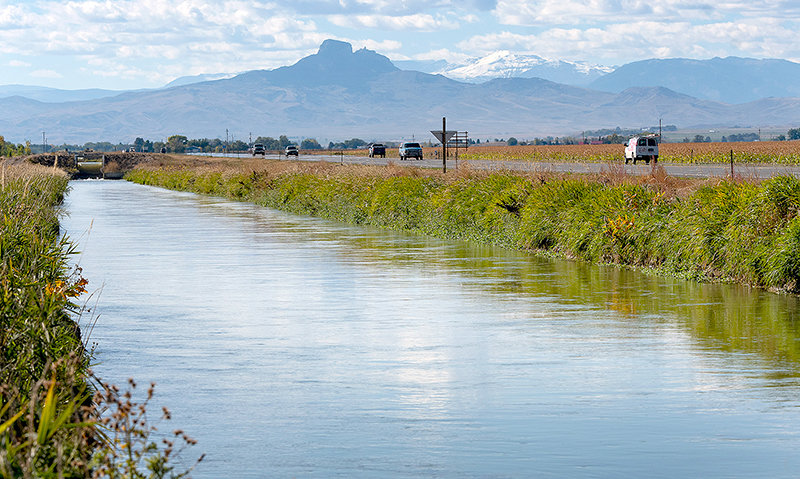 The Garland Canal has long provided water to farms in the region, but in new developments outside of the cities, wells are often the only way for new residents to access water, leading some residents to be concerned about a change in the amount of groundwater available.
Tribune photo by Mark Davis
Posted Thursday, October 6, 2022 8:20 am
By Zac Taylor

Kelly Spiering, the Land Use Plan Advisory Committee representative for agriculture, said the worries about water and the loss of farmland have been the big issues people have talked to him about since the work on a new Park County’s land use plan began.

He said people are seeing more subdivisions popping up and, now that Northwest Rural Water is not adding any more taps due to the current piping infrastructure limitations, drilling wells.

“I have heard of several people having their wells go dry in early spring and forcing them to haul water,” he said.

Worries about water and farm ground run together for a lot of people. Spiering said all but two of the people he’s talked with worry about the loss of farmland — the other two don’t want limits for a farmer selling their land.

“Every other person is concerned about the loss of farm ground and also the impact subdivisions have on water. This includes new wells and irrigation water,” he said. “New subdivisions are being built with no concern for the long term availability of well water.”

And farming practices aren’t helping replenish groundwater as much as they used to, Spiering said, as more are adding pivot sprinklers to reduce the labor required for irrigation. He said pivots don’t provide deep water percolation to replenish wells, and when Idaho went to 100% sprinkler irrigation he said the wells dried up.

Rebekah Burns, Executive Director of Powell Economic Partnership and the economic representative for LUPAC, said while the municipalities are doing fine with water access due to connection to the Shoshone Municipal Pipeline, it’s the county areas outside the towns where new development is running into water access issues. Northwest Rural Water is tapped out at the moment due not to lack of water but because the current piping infrastructure is not built to handle dozens of new rural subdivisions.

Wells are another problem, she said, less because they’re running dry but because in certain areas it can be hard to find potable water.

Burns said the main economic driver of Powell, agriculture, is part of the solution to water issues, as farmers who do use flood irrigation not only water their crops but also replenish the water table, which is high in much of the county.

Spiering said the other issue is that even if water is readily available, most farmers or would-be farmers lack the cash to buy new land.

“Productive farmland is not available to producers because of the prices being paid for subdivision areas,” he said. “One real estate agent commented that lots of 10 acres are selling for $230,000 — $4,000 per acre is very difficult to pay for someone who wants to farm.”