It’s been nearly five years since a repair operation at Willwood Dam unintentionally released a deluge of sediment down the Shoshone River, killing fish and creating a sludge downstream. For a … 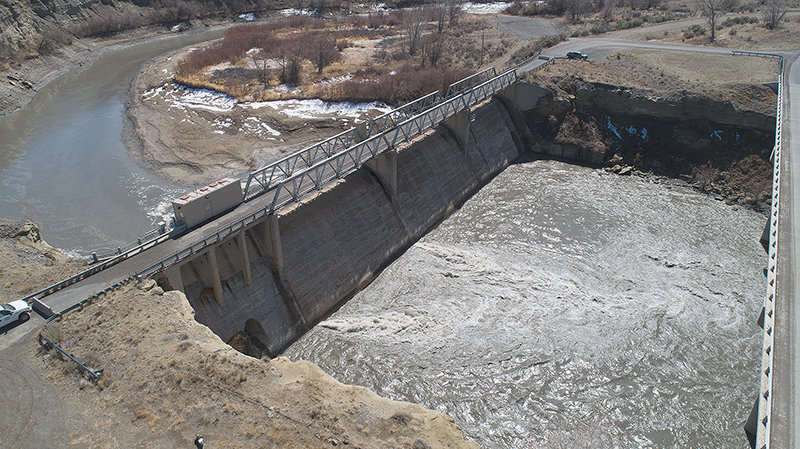 A ‘flushing flow’ from Buffalo Bill Dam mobilized the sediment behind the dam as the sluice gates were opened at Willwood Dam. The operation will help protect aquatic life as well as provide useful data to the working group studying the issue.
Tribune photo by Kevin Killough 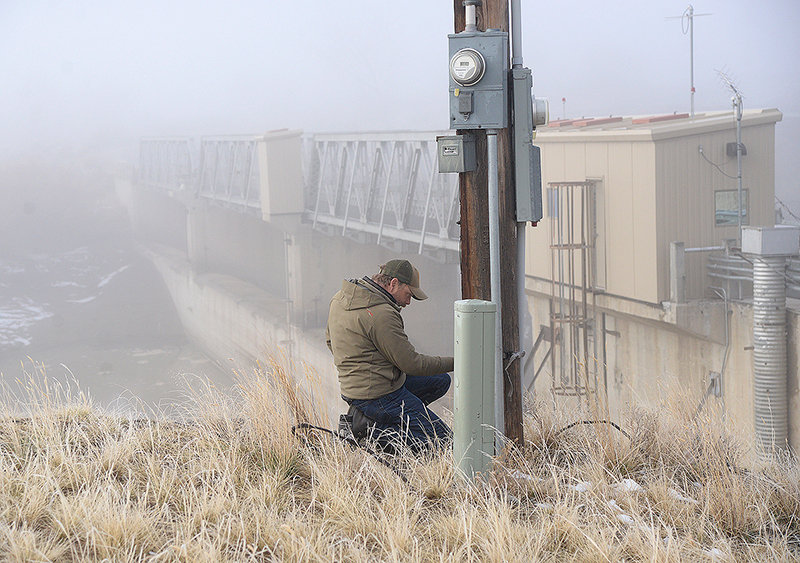 Jason Burckhardt, Wyoming Game and Fish Department fisheries biologist, does some work at a utility pole by Willwood Dam at the start of the operation on a foggy Wednesday morning.
Tribune photo by Kevin Killough
Previous Next
Posted Tuesday, April 13, 2021 8:25 am
By Kevin Killough

It’s been nearly five years since a repair operation at Willwood Dam unintentionally released a deluge of sediment down the Shoshone River, killing fish and creating a sludge downstream. For a river that is key to agriculture and fishing, it raised a lot of alarms.

Jason Burckhardt, Wyoming Game and Fish Department fisheries biologist, said at the time the water had a consistency of a milkshake.

Since then, Willwood Working Group 2 — which includes the Game and Fish, Willwood Irrigation District, the Bureau of Reclamation, Wyoming Department of Environmental Quality, U.S. Geological Survey and a number of other agencies — has been collecting a mountain of data to determine the best ways to prevent such an event from happening again.

On Wednesday, the group coordinated a sediment release and started a “flushing flow” from the Buffalo Bill Dam. It wasn’t the first sediment release at the Willwood Dam since the event in 2016, but the previous releases involved lower concentrations across a longer duration.

There are some very tight windows for these kinds of operations, as the water level below the dam must be lowered enough to allow the sediments to dislodge. Of course, it’s not possible to do that when the river is being used for irrigation during the growing season. That leaves a little space on the calendar in the spring and fall — and fall operations can impact trout spawning.

Wednesday’s release allowed Working Group 2 to collect data and determine if the short-duration, high-concentration approach will help control sediment behind the dam. If the results turn out well, it could provide a long-term, low-cost option and prevent another event like the one in 2016.

There are other solutions the group is evaluating, but they are much more expensive.

Last week’s release required a lot of coordination between agencies, who were closely monitoring the sediment spilling down the Shoshone in case something went awry — and they were prepared to shut down the operation if necessary. Fortunately, everything went smoothly.

“It’s definitely not a starting point for us. We’ve been planning this for several months now,” said David Waterstreet, program manager with the DEQ.

Behind the dam, on the south side of the Shoshone River, is a sandbar that slopes up to some trees and grasses. The river winds around this formation, which didn’t exist when the dam was first built in 1924. That entire island illustrates just how much sediment collects behind the dam.

So much collected in the pool behind the dam that one of the sluice gates won’t open.

The DEQ is working under a contract with the USGS, which ends in October. All these agencies are working to complete their study objectives by then, and have the level and quality of data they need. Wednesday’s release should give them a better look at the kind of deposition that happens during a release of this type, and it will further answer the question of how sediment gets moved downstream.

By this fall, Working Group 2 aims to produce a white paper with a good description of the dam’s sediment budget, which is an analysis of sediment going to and from the dam. From that, they’ll have recommendations that need to be updated for dam operations, and what activities need to take place to ensure there’s not too much sediment stacking up behind the dam. They’ll also have a better understanding of what kind of protections need to be in place to protect fish and recreation downstream.

Government agencies have a reputation for having trouble working together, especially when it involves federal, state and local entities. Waterstreet said this hasn’t been a problem with the working group. The coordination and talent, he said, is unmatched in the other projects he’s worked on in a career spanning over 20 years.

“We have some of the best and the brightest working on this,” Waterstreet said.

Working Group 2 is working concurrently with Working Group 3, which includes a wide variety of federal, state, local, university and private organizations and individuals. That third group is studying how sediment is coming into the river above the dam. They’re in the process of collecting samples from tributaries to determine which ones are contributing to the loading between Buffalo Bill Dam and the Willwood Dam.

“That will help us determine which tributaries or drainages to target for voluntary erosion control projects with producers and landowners,” explained Carmen McIntyre, watershed coordinator with the Powell-Clarks Fork Conservation District and chair of Working Group 3.

McIntyre said the group is about halfway through the data collection process. They’ve got a lot of data, she said, for normal conditions in the irrigation and non-irrigation seasons. What they’re missing is data on precipitation events. The lack of precipitation in the past year has made it harder to make those measurements.

“That is a concern, but obviously something out of our hands,” McIntyre said.

They’ve also been impeded, as so many agencies have, by the COVID-19 pandemic.

“Then we will have a better picture overall which tributaries are pumping out sediment under normal flow conditions or from runoff events from snow or rain,” McIntyre said.

Once they have a good understanding of how the sediment is getting into the river, they can begin preparing for further outreach efforts. They want to let people know who they are, what their purpose is and further engage the public in the process.

Once the group understands how the sediment is getting into the river, it will begin engaging landowners and farmers along those tributaries for help with voluntary actions they can take to help reduce that sediment.

“We’re going to be relying a lot on the interest of landowners to work with us in reducing the amount of runoff that’s entering the streams,” McIntyre explained.

Voluntary projects might include planting willows and building beaver dam analogs, which re-establish woody vegetation around the streams to stabilize the banks and provide habitat.

On Thursday, Waterstreet said that it would take a while before Wednesday’s release is fully analyzed, but early test results were good.

One of the important concerns the group had was how quickly the turbidity — the measure of clarity in a liquid, — of the river would return to normal after the operation was complete. Waterstreet said turbidity levels were falling within the parameters they wanted the day after the flush.

This kind of sediment problem is not unique to Willwood Dam, and Waterstreet said the work the groups are doing is getting noticed by other entities around the country who are facing the same complex challenges with similar small dams.

If all goes well, the working groups may discover real, long-term solutions.