Riding the line between wanting to do what is needed to keep Wyoming wildlife managers well-funded and yet not dramatically increasing fees for resident hunters, the Wyoming Wildlife Taskforce is … 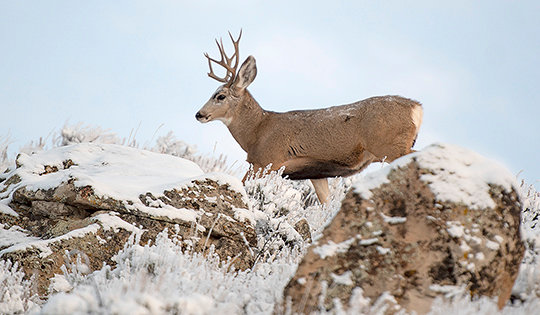 A mule deer buck crests a ridge near Skull Creek while chasing does during the species’ rut last week. The Wyoming Wildlife Taskforce is nearing the end of its 18-month course and will meet for the final time in December.
Tribune photo by Mark Davis
Posted Friday, November 25, 2022 8:42 am
By Mark Davis

Riding the line between wanting to do what is needed to keep Wyoming wildlife managers well-funded and yet not dramatically increasing fees for resident hunters, the Wyoming Wildlife Taskforce is preparing to make their final proposals prior to their final meeting next month.

The group has been meeting since June of 2021 to study top-priority wildlife policy issues facing the state related to the allocation of hunting opportunity, sportsperson access and other issues, and to present conclusions and recommendations to the state Legislature, Game and Fish Commission and governor to support decision making on Wyoming’s wildlife resources.

Despite the task force winding down, discussions over final proposals, including a fairly complicated split of nonresident licenses to be divided between regular price and special price draws, and a motion to change resident/nonresident allocations kept debate lively. The issues are complex, said task force member and outfitter Lee Livingston, of Wapiti.

“That’s what has been one of the struggles with this task force; the complexity of the allocation and the license pricing structure that the Wyoming Game and Fish operates on right now. It’s it’s very complex,” he said. “We in the industry live, eat and breathe it. But for the average person out there, it takes quite a bit to wrap their head around it.”

One of the top issues discussed was a motion from Carbon County state Sen. Larry Hicks that proposed to change the allocation of limited draw deer, antelope and elk tags from the current splits of 80/20 for deer and antelope and 84/16 for elk to a straight 90/10 split.

Former Game and Fish Commissioner Pat Crank seconded the motion “for the purpose of discussion for those who want to die on that hill again.”

The task force had previously debated the motion at their September meeting, where the proposal was defeated based on the economic hardship it would place on communities and landowners. A 90/10 split would reduce the number of limited deer, elk and antelope licenses allocated to nonresident hunters by as much as 50%.

Joe Schaffer, a Laramie County sportsman on the task force, wanted to hear from those against a 90/10 split to explain why Wyoming should have a larger portion of its limited entry permits going to nonresidents than any of our “western state comparators.”

“I have a hard time telling folks that Wyoming has a reason and a purpose why we allocate more of those highest demand, limited-entry permits to nonresidents than any other western state,” he said.

Livingston chimed in to point out comparing Wyoming to other states in the region is unfair.

Taskforce member Sy Gilliland, president of Wyoming Outfitter and Guides Association, said public comment on the issue did not support a change.

Gilliland and other members received support during the public comment period offered during the meeting. Wyatt Wittkop, a Bureau of Land Management employee who has been an active participant in the 18-month process, said a 90/10 split isn’t fair to non-resident hunters.

“If you asked me if I’d accept a lollipop with the consequences of a kick to the nuts to my neighbor, I choose to decline that lollipop,” Wittkop said.

The motion died, as well as the motion to increase the split of nonresident licenses to be divided between regular price and special price draws.

During the discussion, Hicks said he worried that moving forward on a higher ration of nonresident hunters being able to opt for the special-priced draws would jeopardize the task force’s efforts on other pricing proposals.

“My assessment is that the 50/50 [proposal] is a poison pill. And then we lose the whole shootin’ match,” Hicks said.

Paying for the nonresident special pricing option increases the cost of a license by hundreds of dollars to increase the hunter’s chances in the draw. The task force has already proposed wording for a draft bill that would significantly increase nonresident hunting fees.

The final meeting for the task force will be held in Cheyenne on Dec. 14 at Game and Fish headquarters and will be attended by Gov. Mark Gordon. Locally, area task force members and legislators are planning a discussion about the group’s preference point proposed bill at the Cody Region Game and Fish office at 5:30 p.m. on Dec. 8.