Scott Schell owns horses and has lived in Wyoming for 59 years. But until he met Jennifer Fernandez, a horse owner in Cody, Schell had never heard of cases of Potomac horse fever (PHF) in … 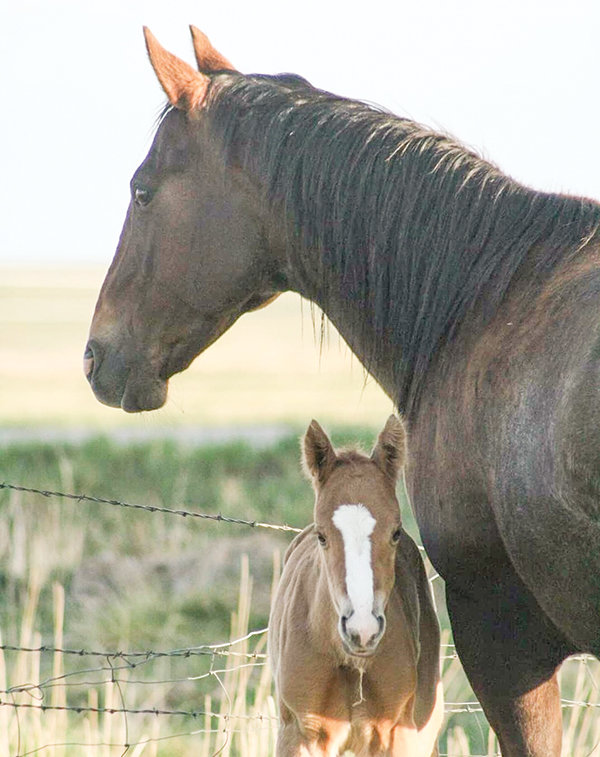 These Park County horses, owned by Jennifer Fernandez, contracted Potomac horse fever in summer 2020. The foal survived but the mare did not. UW Extension is helping to raise awareness of the disease with a new bulletin.
Photo courtesy Jennifer Fernandez
Posted Tuesday, May 10, 2022 8:10 am

Scott Schell owns horses and has lived in Wyoming for 59 years. But until he met Jennifer Fernandez, a horse owner in Cody, Schell had never heard of cases of Potomac horse fever (PHF) in Wyoming.

After Fernandez lost a mare to the disease, she wanted to raise awareness among other horse owners to the hazard posed by PHF. Schell, an entomology specialist in the University of Wyoming’s College of Agriculture and Natural Resources’ Department of Ecosystem Science and Management, agreed and started working on an educational effort.

UW Extension recently released an awareness poster, titled “Potomac horse fever is in Wyoming and adjacent states,” that describes the disease, how it infects horses and what horse owners can do to prevent and/or treat the disease.

“I think that, in the PHF endemic region of the state, people who have had their horses get the disease or had a friend’s horse get it are very aware. Additionally, many veterinarians in those known PHF areas recommend vaccination for the disease,” Schell said. “However, I think many people from other areas of the state aren’t aware of PHF.”

PHF is a warm season disease of equines. Horses, mules and donkeys contract PHF after accidentally eating adult aquatic insects, such as mayflies and caddisflies, infected with a bacterium. The disease begins with mild symptoms, usually one to three weeks after ingestion of the infected insects.

According to the poster, symptoms horse owners should watch for are depression, lack of appetite, watery diarrhea, mild colic (with watery but decreased gut sounds) and laminitis symptoms on all hooves. If a horse is depressed, owners should check the animal for a fever ranging from 102 to 107 degrees.

As PHF progresses, more severe symptoms, such as acute laminitis, can occur and the disease can cause up to 30% mortality. Mares that are 100 to 160 days pregnant when infected with PHF may abort at 190 to 250 days in pregnancy after appearing to recover from the disease.

“It is part of good horse management to observe what is normal for your animals and then to watch for the abnormal every time you are around them,” Schell says.

Because PHF is a bacterium, it is treatable with the correct antibiotics, according to the poster. If a PHF infection in a horse is recognized, diagnosed and treated quickly, an animal’s prognosis is greatly improved.

While he admits he is no veterinarian, Schell says that, according to the literature he’s read, initiating intravenous antibiotic treatments before a horse exhibits the extreme diarrhea symptoms of the disease will reduce the probability of a bad outcome.

Besides vaccinations, a good way to protect equines from becoming infected is to turn off barn lights during summer nights when aquatic insects are flying. This can help prevent the insects from ending up in water troughs and food mangers, where they could be consumed by horses.

Schell has a number of ideas as to where to release the poster.

“I think any place the horse-owning public may be visiting or spending time waiting at will be a good place for the poster. So, veterinarian offices, feed stores, boarding stables, extension offices, etc.,” he says.

Schell plans to get some posters to 4-H horse programs around the state and have the members ask to post the posters in appropriate places.

“I think the poster needs to go up in places where it is a known risk for horses; where there are horse owners new to an endemic area; or just visiting there to know what the symptoms are to watch for,” he said.

Schell adds that horse owners from parts of Wyoming where PHF may not be present need to be aware of the symptoms in case the disease spreads to other river basins. In 2002, PHF was found in the Big Horn Basin. Before then, the disease was only known to be present in the far southwestern part of the state.

“Hopefully, it doesn’t spread everywhere,” Schell says. “But we need to determine PHF’s current extent and monitor for expansion.”

PHF is currently known to occur in western Wyoming and adjacent areas of Idaho, Utah and Montana, plus parts of Nebraska and South Dakota.

Schell hopes to develop a project in cooperation with some researchers to look at both the prevalence rate of PHF in the state and where the disease is present or absent. The information could be important for improving PHF management and providing guidance to both veterinarians and horse owners.

“For example, if we randomly sample horses five years and older that have lived all of their lives in an endemic PHF river valley and find that 95% have been previously infected, it will indicate that a new horse from a PHF-free area brought there will probably contract PHF and vaccination to reduce the severity of the disease is a very good idea,” Schell says. “My hope is to involve 4-H members with their horses and make it a ‘citizen science’ project.”

The poster can be found online at tinyurl.com/mvzkhcyx. For more information, call Schell at 307-399-9344 or email sschell@uwyo.edu.