Reps. Dan Laursen and David Northrup, both Powell area Republicans, fielded a variety of queries from a crowd of 40 to 50 residents at the Powell Branch Library.

The two lawmakers disagreed on a couple of hot topics raised by the audience: … 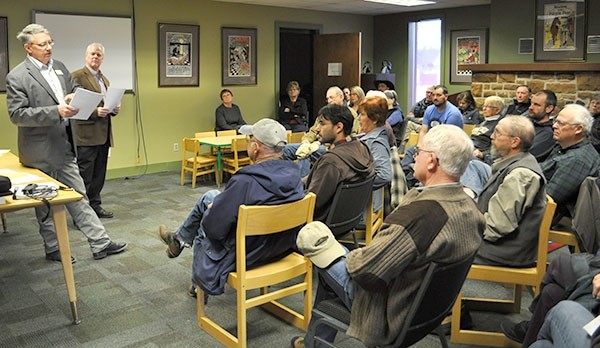 A couple of local lawmakers faced some pointed questions on guns and global warming at a Saturday town hall meeting.

Reps. Dan Laursen and David Northrup, both Powell area Republicans, fielded a variety of queries from a crowd of 40 to 50 residents at the Powell Branch Library.

The two lawmakers disagreed on a couple of hot topics raised by the audience: whether to allow concealed-carry permit holders to bring guns on college campuses and whether climate change is a man-made problem.

Northrup said he believes climate change is a function of many things, including man.

“Yes, man has had a footprint in it,” Northrup said. “There’s no doubt.”

Later, Laursen said he was “probably on the opposite side” of Northrup’s view.

“I think Mother Nature provides most of that, you know. I think man does do some, but not as much …” Laursen said, before being interrupted by members of the audience.

“Now that’s based on what?” a resident interjected.

“Probably on the other scientific guys talking about it,” Laursen said.

Shane Tillotson of Powell, who ran against Laursen in November’s general election, asked Laursen why he’s going against scientific consensus on climate change.

“There’s not both sides; that’s the issue,” Tillotson said. “Over 97 percent of scientists agree on this — so you’re going to side with the 2 percent, partly because you’re in a state that relies on oil and gas for a tax base.”

“Obviously, we can argue about that for a long time,” Laursen responded.

Several residents in the audience said since it’s science based, there isn’t much to argue about.

“There’s not an argument,” said Rachel Hanan. “You accept what scientists say or you don’t.”

Fossil fuels and alternative energy in Wyoming also came up. Sandra Frost of Powell said she was concerned about a bill that proposed a surtax on solar and wind power generation; the bill ultimately died.

“We need all kinds of energy in this state,” Frost said. “We’re perfectly situated for wind and solar.”

“Especially in the southern part of the state — the wind blows all the time down there,” Northrup said.

Hanan, who teaches at Northwest College, asked lawmakers what the state is doing to create new jobs in other industries, such as wind and solar.

“The Wyoming economy is obviously not doing terribly well,” she said. “So what are we doing to actually diversify our economy to bring more kinds of jobs into the state and keep some of our kids here?”

Northrup said there are a few different economic development projects in the area, including Cody Laboratories’ planned expansion. The Legislature also is considering some bills related to economic development: House Bill 253 would provide money for the large project loan fund — a fund that Cody Labs has tapped into — and Senate File 132 would fund and establish Gov. Matt Mead’s ENDOW (Economically Needed Diversity Options for Wyoming) initiative.

When Smucker’s recently looked at opening a factory in Cheyenne, “Guess what they said? There’s not enough people in Wyoming to have the workforce they need,” Northrup said. “They need 500 new people in that factory to work.”

Billie Boehm of Cody asked about funding for start-ups and small businesses, and what the state is doing to keep young people in Wyoming.

“If we empower people to stay here, then when those jobs leave, when that money runs out, when we get into another bust, those of us who have dug deep, who have employed our fellow neighbors, we’re still here,” she said.

Rep. Northrup opposed House Bill 136, which would allow concealed carry permit holders to bring guns onto college campuses and into public meetings; Rep. Laursen voted in favor of it.

Renee Dechert, a professor at Northwest College, thanked Northrup for his vote and asked Laursen why he supported the measure. NWC has undergone terrible budget cuts, and if the bill passes, she said the college will face increased insurance costs and have to pay for a new security plan.

“There is no evidence in the world that supports that guns on campus make students or faculty safer,” Dechert said. “I do not understand your reasoning.”

Laursen said he believes the measure will make campuses safer.

“Look at Utah — they’ve had it for 15 years and they haven’t had any incidents,” Laursen said.

He was pressed again for scientific evidence and research.

“I believe it’s our personal right to have guns,” Laursen said.

Keith Edge of Powell said as a former school administrator, he wouldn’t want guns in the hands of people who are not very skilled. He asked how educators and law enforcement would know who the good guys are versus the bad guys.

“It’s a split-second decision, who lives and who dies? And you’ve got to know who they are,” Edge said.

“I think it’s going to be pretty obvious,” Laursen said. “I think the issue is, are they (police) going to get there quick enough?”

Scott Feyhl of Powell, a former NWC professor, asked what happened to believing in local control as opposed to central control when it comes to guns on campuses.

“I think you’ve got to give that to the personal guy — he should be able to protect himself also,” Laursen said, adding that concealed-carry permit holders must be 21 or older and need to be trained.

“What about the philosophy of letting local units have the decision making?” Feyhl asked.

“I don’t believe in that,” Laursen said.

Laursen referenced a need for consistency.

“Because how does a student or person coming into a school know if that school is concealed carry legal or not legal?” Laursen responded. “That’s one of the big issues.”

Amy McKinney, who teaches at NWC, noted that most college presidents in Wyoming oppose the measure.

“It’s not about a Second Amendment rights issue, as you are trying to frame it,” she said. “This is about protecting not just our students, but the faculty and staff who work in that institution as well.”

Dechert said the bill is not ready to go forward.

“If you wish go forward with this, I think at the very least, you would wait another year to have time to put together a more workable bill that had more community input,” she said.

Since the measure has passed the Wyoming House, Northrup told residents to contact Senate leaders who will assign the bill to a committee.

Rep. David Northrup, who chairs the House Education Committee, outlined House Bill 236, the omnibus school finance bill, at a Saturday town hall. In addition to proposed cuts and a possible sales tax increase, Northrup said the state will re-examine how it funds education this summer, in a process called recalibration.

One of the biggest ways to make cuts is by increasing class sizes that are currently at 16 students, he said.

“That’s the first place we’re going to look at,” Northrup said. “If we bump that up to 18 in the grade schools, and 24 in high school and middle school, that would be a $75 million cut when that was fully implemented. Just doing that one thing will be a big cut to what we’re funding.”

Currently, districts are funded at a 16-to-1 ratio, but they have more students in classrooms and that money pays for other things in the district, he said. If the ratio is increased, that money would go back to the state.

Scott Feyhl said it looks like the state will have a net loss of teachers.

“That’s what will happen, will be the net loss,” Northrup agreed. “You’ll lose some teachers, somewhere.”

A proposed half-percent sales tax would generate $75 million a year for schools if the state’s rainy day fund ever drops below $500 million, but Northrup doesn’t expect that provision to pass.

“We’ll never get to that,” he said. “It’s not going to survive the Senate.”

One resident asked about cutting budgets for sports and busing kids around the state for competitions.

“That’s what we hear everywhere we go and every legislator has heard it — those yellow buses are running Thursday, Friday, Saturday,” Northrup said. “That’s what you see on the roads is a yellow bus taking a team someplace.”

Martin Kimmet of Clark said cuts shouldn’t be made in the classrooms with teachers as much as with administration.

Rep. Dan Laursen said recalibration will look at administrators, too.

“But remember, that’s a local control thing,” Northrup said. “The state can provide a block of money — it’s called a block grant — and the school board figures out how to spend it.”

He agreed money shouldn’t be taken from teachers.

Kimmet also questioned the need for the new school buildings around town.

“We don’t have any money to build buildings with — that was coal lease bonus money that was building those buildings,” Northrup said. “It’s all gone.”

The state doesn’t have money to maintain school buildings, he added.

Northrup said the Senate’s school finance bill —  Senate File 165 — has some good ideas, but some are not cost-based and will get the state into court.

Legislators will work on cutting out the bad parts of the bill and combining the good parts of both bills, he said.

“When we’re done — if they both get passed out of both houses — we’ll meld them together into a funding formula for the next year or two,” Northrup said.