As of Aug. 1, there have been 21 known or probable grizzly bear deaths reported to the U.S. Geological Survey in 2022. 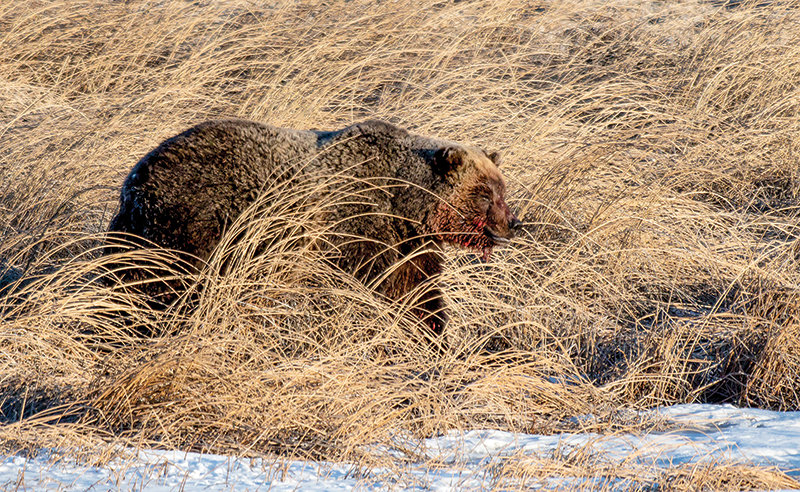 A grizzly bear looks for a good spot to nap after a meaty meal earlier this year in Yellowstone National Park. More than 20 grizzly bears are known to have died this year in Wyoming due to infanticide, natural causes and management decisions by the U.S. Fish and Wildlife Service.
Tribune photo by Mark Davis
Posted Tuesday, August 9, 2022 8:15 am
By Mark Davis

As of Aug. 1, there have been 21 known or probable grizzly bear deaths reported to the U.S. Geological Survey in 2022.

Five grizzly bears have been lethally removed by Wyoming Game and Fish officials after consultation with the U.S. Fish and Wildlife Service, four have been killed by other bears, one has been humanely removed in a decision based on its poor health, one was from natural causes, two deaths have been classified as undetermined and eight deaths are currently under investigation.

Grizzly bears removed by Game and Fish for conflicts with humans have typically been caught and relocated several times, depending on the nature of the conflict, according to department officials.

Both grizzly bears were captured and relocated for livestock depredations occurring on private and public land, respectively. The bear captured on Sunday was relocated to the Bailey Creek drainage approximately 11 miles from the South Entrance of Yellowstone National Park. The bear captured on Monday was relocated to the Five Mile drainage, approximately 5 miles from the East Entrance of the park.

“Grizzly bear relocation is a management tool large carnivore biologists use to minimize conflicts between humans and grizzly bears. It is critical to managing the expanding population of grizzly bears in Wyoming,” the department said.

Capture is necessary when other deterrents or preventative options are exhausted or unattainable, according to officials. Once the animal is captured, all circumstances are taken into account when determining if the individual should be relocated. If relocation is warranted, a site is determined by considering the age, sex, and type of conflict the bear was involved in as well as potential human activity nearby.

Grizzly bears are only relocated into areas already occupied by other grizzly bears. With any relocation, Game and Fish consults with appropriate agencies to minimize the chance of future conflicts and maximize the relocated grizzly bear’s survival.

“Bears that are considered a threat to human safety are not relocated,” the department reported.