Two place at Battle of the Rockies

After heading into the weekend expecting to drop a pair of duals in Great Falls due to injuries and illness, the No. 9-ranked Northwest College wrestling team pushed through for a pair of dual wins …

Two place at Battle of the Rockies 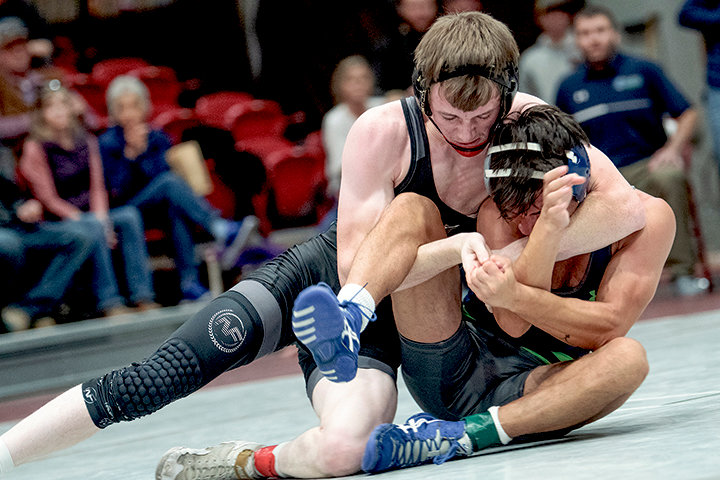 Avery McSpadden holds down his opponent during the Joe Mickelson Memorial Wrestling Open in November. The Trappers head on the road for a top-10 showdown on Friday in Rock Springs.
Tribune photo by Carla Wensky
Posted Thursday, December 8, 2022 9:20 am
By Seth Romsa

After heading into the weekend expecting to drop a pair of duals in Great Falls due to injuries and illness, the No. 9-ranked Northwest College wrestling team pushed through for a pair of dual wins 36-18 over No. 15 Snow College and 34-23 over Dickinson State on Friday.

In the first dual, the Trappers got an early boost over Snow when a forfeit at 125 pounds gained six points for Avery McSpadden.

Jose Treyes helped push the lead out to 9-0 with a 10-4 decision, before Bobur Birdiyorov pinned his opponent in the first round to give Northwest a commanding 15-0 lead.

“Bobur was jaw dropping,” coach Jim Zeigler said. “Everybody in the building was asking who he was.”

Jake Olsen was pinned quickly in the first round at 149 pounds, and successive forfeits at 157 and 165 pounds gave Snow a narrow 18-15 lead.

Aziz Fayzullaev captured momentum right back for the Trappers, earning a pin in the second period to give Northwest the lead back for good.

Cody Todd added to the lead with a pin of his own early in the third round to make it 27-18.

Ryker Blackburn pushed through at 197 pounds, earning a first round pin while Cody Pinkerton earned a win via decision 7-1 to finish off the match to make it 36-18.

“Ryker is cleared to wrestle but I have just been hesitant to put him into some situations,” Zeigler said. “I told him if we are in a position to win the dual when it gets to your weight there is a chance we will put you in, he was ready for it.”

A short rest allowed the Trappers to regroup, matching up with NAIA school Dickinson State in their second bout of the day.

Northwest fell behind early after McSpadden was pinned at 125.

Treyes won by major decision at 133 pounds to make it 6-4, before Birdiyorov again pinned his opponent in the first round at 141 to give Northwest the lead at 10-6.

Olsen carried the momentum, earning a pin in less than a minute at 149 pounds to make it 16-6.

“Momentum in duals is so important,” Zeigler said.

After gaining momentum, Northwest again forfeited at 157 and 165 pounds, to trail 18-16 just over midway through the match.

Fayzullaev pinned his opponent in the first round to regain the lead 22-18.

A technical fall at 184 pounds saw Todd on the wrong side of the scoreboard, giving Dickinson the lead back at 23-22.

BATTLE OF THE ROCKIES

After the duals on Friday the Trappers remained in Great Falls on Saturday, entering four athletes into the Battle of the Rockies Open.

The top placer for Northwest was Treyes at 133 pounds, finishing the day 4-2, rebounding from a quarterfinal loss to finish fourth overall.

“He was wrestling high-level competition,” Zeigler said. “Going 6-2 on the weekend is a great weekend for him, he was 6-6 going into the weekend. Coming out 12-8 overall was huge. If you have a young guy going into Christmas break .500 or better he’s doing a great job.”

The next top placer for Northwest was Leighton Jensen at 285 pounds, who placed sixth after going 1-3 on the weekend.

Northwest heads back out on the road for its final contest of 2022, heading down to Rock Springs for a top-10 matchup against No. 2-ranked Western Wyoming.

“They have had great teams the last couple of years,” Zeigler said. “I don’t know the expectations for this week, but we want to restore the natural order of things with Northwest on top and Western on bottom.”

The Trappers are anticipating the return of Gus Harrison at 157 pounds, but are uncertain if Orrin Jackson will clear concussion protocol at 165 pounds to compete in the dual.

Zeigler said  it will be a difficult environment to win in, and also knows that both teams will have different lineups once the second semester starts but wants to carry momentum heading into the winter break after this week.