Heading into the weekend, the Trapper volleyball team was in a tight race with three other teams for the No. 2 seed in the Region IX north. They welcomed two of those teams to Powell in Laramie … 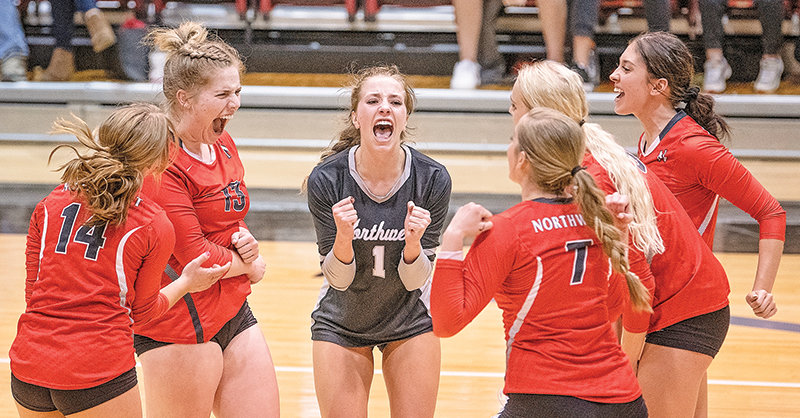 Aubrianne Crosby, Karli Steiner, Paige Weimer, Jacie Walker, Sidney Parker and Baylee Peterson come together in celebration after winning a point against LCCC on Friday. The Trappers would sweep the Golden Eagles, splitting the series season at a match a piece.
Tribune photo by Carla Wensky 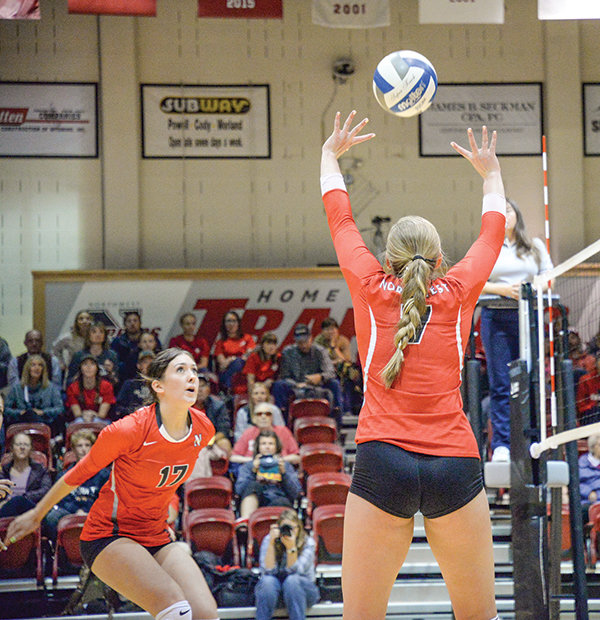 Jacie Walker sets the ball towards outside hitter Baylee Peterson during NWC’s match against LCCC on Friday. Walker and Peterson led the team in assists and kills during the match, and the Trappers went on to sweep the weekend series.
Tribune photo by Seth Romsa
Previous Next
Posted Thursday, October 21, 2021 8:20 am
By Seth Romsa

Heading into the weekend, the Trapper volleyball team was in a tight race with three other teams for the No. 2 seed in the Region IX north. They welcomed two of those teams to Powell in Laramie County Community College (LCCC) and Eastern Wyoming College (EWC) for their final home matches of the season and beat them both.

The first set between the Trappers and Golden Eagles would be one to remember.

Facing set point, the Trappers were given a point after a net violation by the Golden Eagles, but a serve out of bounds gave the advantage right back to LCCC.

The Trappers battled back, and things were tied at 28 when libero Paige Weimer made a dig. The ball hung in the air as if it was going out, then dropped right in front of the LCCC bench to give the Trappers a 29-28 advantage.

“It was one of those weird things where the angle made it look like it was probably not going to go over, but by the time everybody realized it was going over it was too late,” NWC coach Scott Keister said.

The Golden Eagles then hit the next spike long as the Trappers took the first set 30-28.

The second set started stronger for the Trappers, as they took an 11-6 lead before forcing a timeout from the Golden Eagles. The Trappers maintained a five-point advantage before the Golden Eagles took a second timeout with Northwest leading 17-12.

NWC ultimately put together the last eight points of the set, hitting .423 as a team and taking a 2-0 lead after a 25-23 victory.

“Our goal coming into this weekend was eliminating their runs; both teams are pretty good at putting their runs of three, four and five points together,” Keister said. “I think we did a pretty good job of that both nights.”

Short serving — something Keister said the team had not seen a lot of this season — was an issue for the Trappers, but they were able to adjust by the end of the match.

“We did not start off well,” the coach said. “I called that second timeout and said ‘That’s it for me, I can’t help you anymore; either you are going to embarass yourself or you are going to find a way to win.’”

Keister said the Trappers constantly practice scenarios where they are down by a lot of points and are forced to comeback, with the intent of practicing what it feels like to play from behind.

Out of that second timeout, the Trappers outscored the Golden Eagles to come within two points, 15-13, and forced an LCCC timeout.

An extended run of service from Brooke Palmer then allowed the Trappers to pull ahead 20-19.

Palmer’s role “is to come in and serve for Baylee [Peterson] from time to time,” Keister said. “She has really embraced that role and is really doing a nice job with it.”

The Trappers maintained their advantage and finished the match with a 25-23 victory and a sweep over LCCC.

Keister attributed the success of the night to the activity of his middle blockers, who have helped open up hitting opportunities for their outside hitters with their blocking abilities.

Peterson finished the night leading the Trappers with 11 kills. Jacie Walker led the team with a .750 kill percentage and 37 assists, and Weimer lead the team with 21 digs.

The Trappers came out on a mission on Saturday against Eastern Wyoming (8-12 overall, 2-5 Region IX north).

The Trappers came out with energy and never looked back, building an 8-2 advantage over the first 10 points of the match.

“I don’t know what caused that, but it was fun,” Keister said.

Throughout the season, the coach said his team has proven they’re a good, aggressive serving team, and that their serving plan each week has helped them build advantages through serving runs.

The Trappers continued their early set domination, and finished the first set winning 25-10 over the visiting Lancers.

Unfortunately for the Trappers, Eastern came out to play in the second set.

The hitting by the Lancers gave the Trappers issues early, despite the set being tied 7-7.

“We were not blocking the ball,” Keister said. “We had three blockers up and we still could not touch the ball.”

Due to the different hitting patterns, the coach started to move Weimer to different positions in the back as a libero. It’s atypical, but Keister felt it needed to be done to help adjust the squad’s hitting.

The Trappers led 15-12, but after a Lancer timeout, they scored four straight to lead grab and advantage they wouldn’t lose. The Lancers took the second set 25-22 and tied the match 1-1.

The Trappers needed a response in the third set, and got one — starting fast with a 13-4 lead that forced a Lancer timeout.

A quick rally by Eastern made it 13-7, which forced Keister to call a timeout of his own and settle his team down.

“They just kept their composure,” Keister said. “It is a fun thing to see the more success they have against good teams their confidence builds.”

The Trappers maintained enough distance between them and Eastern en route to a 25-20 set victory. They repeated that result in the fourth set, winning the set 25-20 to take a 3-1 victory in the match.

NWC team was led in kills by Sidney Parker with 13, Peterson with a .429 hitting percentage, Walker with 39 assists and Weimer with 15 digs; four athletes finished with double digit digs.

The Trappers ended the regular season with a 1-1 record against LCCC, and a 2-0 record against Eastern. Although both teams have losing records, Keister said that, coaching- and talent-wise, those records are not indicitive of who they are as teams.

With the weekend victories, the Trappers secured their first 20 win season for the program in five years. Keister added that, according to records kept back to 2000, Weimer is close to becoming the program’s all time leader in digs.

With the home schedule finished for the Trappers, they now head on the road for the rest of their season — beginning with nationally ranked No. 12 Central Wyoming (18-6 overall, 7-0 Region IX north) on Friday at 6 p.m.

NWC will square off with the top team in the conference and will bring their five-game winning streak, which dates back to an Oct. 1 loss to Central.