Though Northwest College women’s soccer dropped its last two matches, the Trappers showed progress on the offensive side, scoring their first goals of the season. 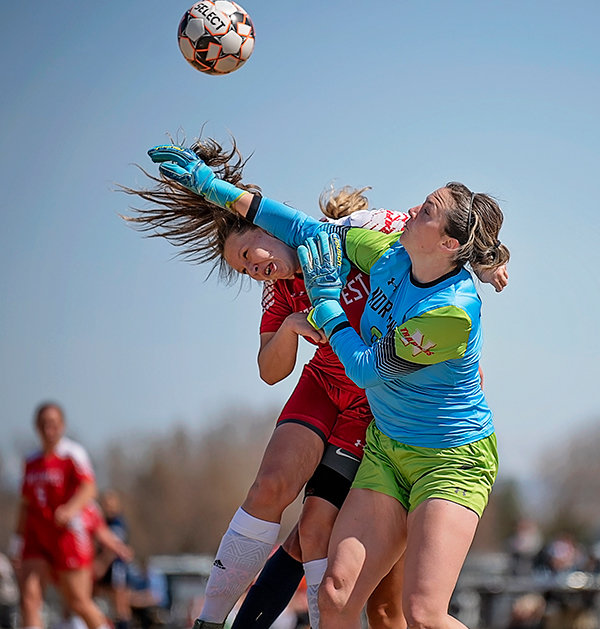 Goalkeeper Alexa Williams hits a ball away in Northwest College’s Saturday match against Otero and collides with teammate Shyley Hunter, who was defending. Despite falling to the Rattlers, the Trappers scored their first goal of the year when Kierra Cutright cashed in on a corner kick.
Tribune photo by Carla Wensky 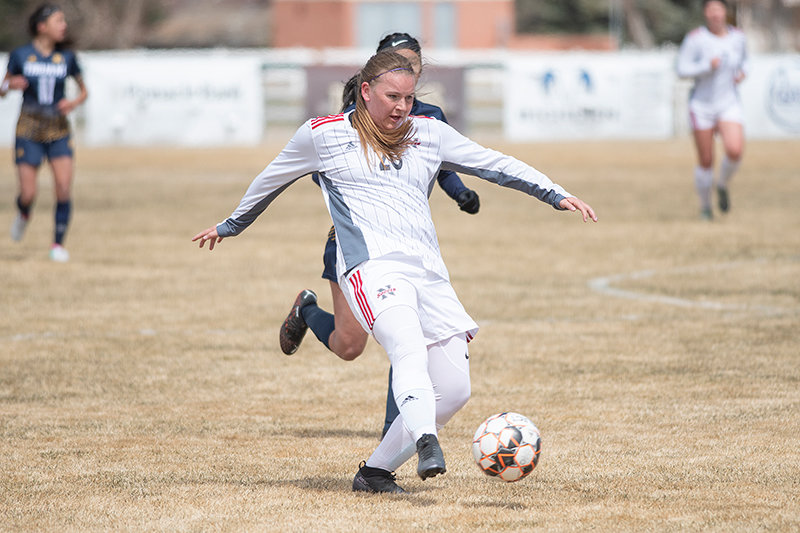 Though Northwest College women’s soccer dropped its last two matches, the Trappers showed progress on the offensive side, scoring their first goals of the season.

In the loss to Otero, NWC took an early lead when sophomore Kierra Cutright scored off a corner kick in the 21st minute.

But just minutes later, OJC answered with two goals in a two-minute span, giving the Rattlers a lead they didn’t surrender. They added two scores in the final 45 minutes to clinch the three-goal dub over the Trappers.

While NWC got an offensive boost from Cutright’s goal, preventable lapses were costly against Otero.

“We’re not getting broken down by exceptional play; it’s the little things that we can control,” head coach Rob Hill said. “Unfortunately, they were able to capitalize on that. If we make simple adjustments, we’ll be able to deal with that.”

A couple days later, NWC fell into an early hole when Trinidad State scored in the first 12 minutes. But moments after the Trojans’ goal, Riley Surratt struck a ball from 25 yards behind their keeper to equalize the match in the 15th minute.

While aided by the breezes, the strike impressed Hill.

“It was a great shot, and rightfully so with the wind,” he said.

But after the equalizer, NWC wasn’t able to take advantage of opportunities. The Trappers didn’t get many more shots in the first half, when the wind blew in their favor. Hill cited a lack of intensity from his squad in the first 45.

“We didn’t capitalize,” Hill said. “We should’ve had more shots on goal. We hit a lot of straight balls through the middle, running straight through to the keeper.”

While the coach said his team looked sharper in the second half, the Trappers had a wind disadvantage and the Trojans took advantage. TSJC’s Laura Torres knocked in the game-winning goal in the 82nd minute, sealing NWC’s fifth loss of the season.

Had NWC performed better when it had the wind at its back, Hill believes the outcome could have been different.

“We could’ve won,” he said. “It was fairly evenly matched. If we cut out our mistakes, I think we’re in good shape.”

While the Trappers didn’t pick up the win, the scorelines were the closest of the year and they found the back of the net for the first time. Hill
described the offensive effort as an improvement that he expects to continue getting better as the season progresses.

Still, the coach has certain focuses he is preaching to his squad as they get used to playing college soccer.