The Northwest College volleyball team was hit with one of its longest weeks of the season as the Trappers made the long road trip to the southeast corner of the state, and returned home to play a … 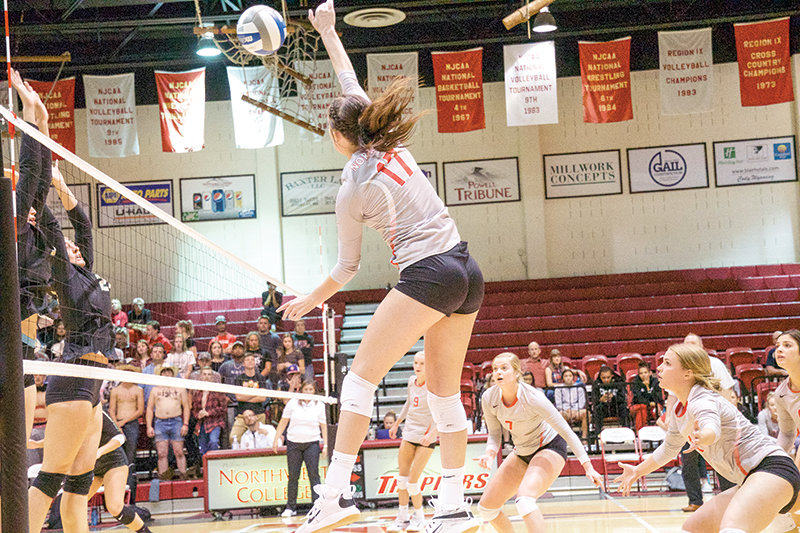 Sophomore outside hitter Baylee Peterson goes up for the spike against Rocky Mountain JV on Tuesday. Peterson is getting back to 100% health following an illness early in the season.
Tribune photo by Seth Romsa 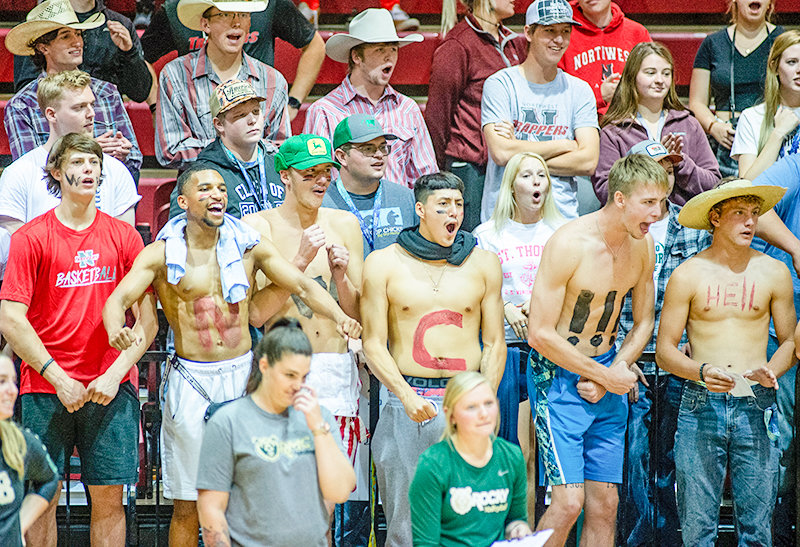 The Trapper student section brought the excitement to Tuesday’s volleyball game, helping will the team on to a 3-1 victory over the visiting Rocky Mountain JV.
Tribune photo by Mark Davis
Previous Next
Posted Thursday, September 30, 2021 8:25 am
By Seth Romsa

The Northwest College volleyball team was hit with one of its longest weeks of the season as the Trappers made the long road trip to the southeast corner of the state, and returned home to play a match Tuesday night.

The week began with an eight-plus hour bus ride on Sept. 23 to Scottsbluff, Nebraska, where the Trappers (16-3 overall, 1-1 in Region IX North) faced off against the No. 14-ranked Western Nebraska Community College (WNCC) Cougars.

The Trappers came out and played with WNCC (15-8 overall) in the first set. According to coach Scott Keister, the Cougars are much better than their record indicates as they have faced top competition early on in the year.

“Western Nebraska played really well and we were with them point-for-point,” Keister said.

The Trappers lost the first set 25-22, but Keister does not know exactly what happened to his team after that.

“I have replayed it over and over, and after that first set we turned into a bunch of middle school kids,” Keister said.

With problems popping up in every aspect of the game, the Trappers faltered in the next two sets, losing 25-11 and 25-13, resulting in a sweep by the Cougars.

The Cougars were led by Ale Meoni, who had 18 kills — nearly as many as the whole Trapper team, which finished with 19.

The road did not get any easier for the Trappers, as they had to drive to Cheyenne and take on the Laramie County Community College (LCCC) Golden Eagles the next day in one of the toughest road environments in the conference.

The Trappers came out and battled point for point in the first set, but came up short to LCCC (9-10 overall, 1-1 in Region IX North) as eight errors led to an opening set loss 25-22.

The NWC team responded in a huge way in the second and third set, boasting a .212 hitting percentage in the second set winning by a wide margin of 25-12, and the third set 25-15.

“They played well, they played hard and they made adjustments,” Keister said.

The coach attributed the success to his team’s better passing, along with sophomore outside hitter Baylee Peterson hitting well and nearing 100% after being sidelined for a few weeks with an illness.

The fourth set again was a back and forth battle, but a monstrous .314 kill percentage from LCCC compared to the Trappers’ .094 caused the Golden Eagles to force a fifth set with a 25-23 win.

The Trappers wound up dropping the fifth set 15-13, and fell to 0-1 in conference play heading into Saturday.

Keister said his squad played well in the fifth set, and he felt they deserved the victory, but were unable to earn it due to some errors in officiating that went against them.

“There were three calls in that fifth set that were obvious,” Keister said. “So it was tough, in the big picture of things I am kind of glad that happened as it put a chip on the girls shoulders as they played one of their better matches of the year that night.”

The Trappers were much improved in Friday’s match against LCCC, led by 15 kills by Peterson. She finished with a .263 hitting percentage, and a team-high 32 digs from sophomore libero Paige Weimer.

The Trappers went into Saturday with two straight losses on the road, and traveled to Torrington to face the Eastern Wyoming College (EWC) Lancers.

Keister felt like EWC’s record (5-8 overall, 0-2 in Region IX North) was not indicative of their play to this point in the season.

The team was once again led in kills by Peterson, as she finished with 14 and a .522 kill percentage. Freshman middle blocker Sidney Parker finished with an impressive stat line of 10 kills on a .389 kill percentage, and led the team with 14 digs and four block assists.

“I was really proud of the weekend,” Keister said. “It would be nice to be 2-0 in conference right now but I think we learned a lot, we learned we were a great team and we can play with just about anybody.”

The team returned home after their trip to southeast Wyoming, and had no time to rest as they took on the Rocky Mountain JV team of Billings, Montana, on Tuesday.

The Trappers started out a little slower and with some miscommunications in the first set. Keister tried putting freshman Emma Hanson starting setter reps as she will have to start in their next match due to sophomore Jacie Walker attending a family emergency

“You can swap in hitters it’s no big deal, but when you swap a setter it is very different,” Keister said. “She [Hanson] is a freshman, it’s her first game, so it took a while to get her rolling a little bit.”

Despite the slow start, Hanson and Walker were able to keep the team going with their serving, allowing the Trappers to gain momentum.

After nine kills mixed with nine hitting errors in the first set, the Trappers came away with a 25-20 victory.

Up until midway through the second set, the Trappers could not find their stride on the hitting end. Then Peterson, along with Parker, began to light up the gym with inch-perfect hits.

Returning home after a road trip and not playing in front of a home crowd sometimes comes with added pressure, but Keister was happy his team responded.

“This was the best crowd we had all year, it was awesome,” the coach said. “They have not been home for awhile, there was kind of a funk in the air today though and sometimes you have those days.”

The Trappers dropped the second set after a large Rocky run put it away at 25-21, but they responded by dominating the third set 25-15 and took the fourth set 25-20 to complete the 3-1 victory.

Keister saw improvements from his players in finishing the opposing team’s serves off of one kill, but still feels they can do better in that aspect of the game as they move into their next conference match.

The Trappers are hoping they can continue to show improvement, as they head into their third conference match and a second match in a four-game homestand.