The Northwest College men’s basketball team was two missed layups away from being undefeated on the season, but the squad still boasts a 4-2 record. The Trappers defeated Northeastern on … 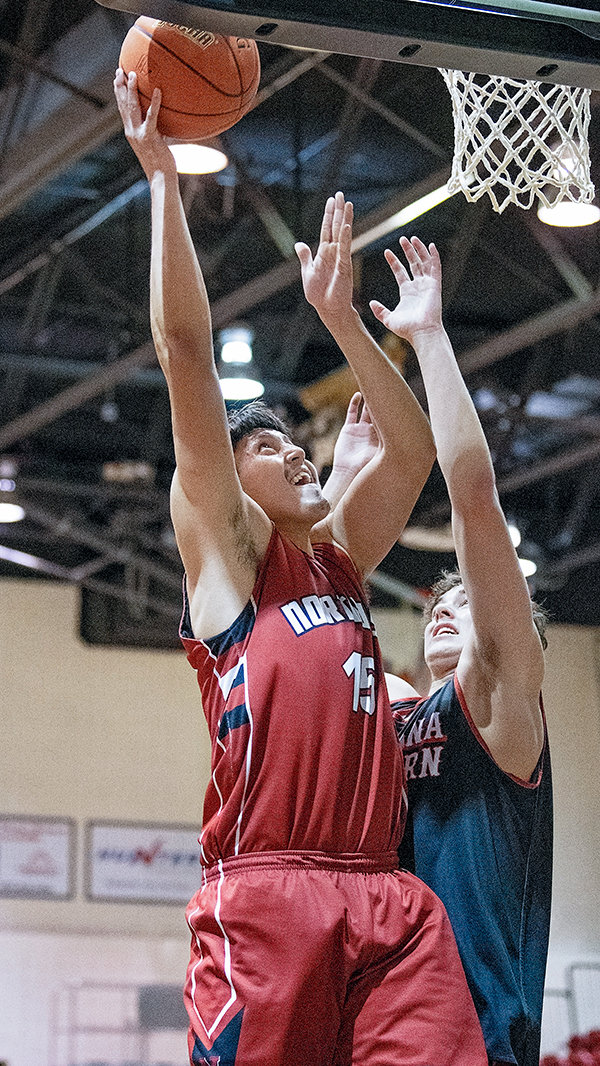 NWC sophomore Alex Avila goes for a layup against Montana Western during a scrimmage in October. The Trappers have opened their season 4-2 and continue a road swing through Montana before heading to North Dakota next weekend.
Tribune photo by Carla Wensky
Posted Thursday, November 18, 2021 8:20 am
By Seth Romsa

The Northwest College men’s basketball team was two missed layups away from being undefeated on the season, but the squad still boasts a 4-2 record. The Trappers defeated Northeastern on Friday, dropped a close contest to Lamar on Saturday and defeated the Rocky Mountain JV on Tuesday.

Starting off the weekend, the Trappers jumped out to a quick 15-2 lead on the defending Region IX champion, Northeastern Junior College (3-2).

The game continued back and forth the rest of the half, with Trappers up 46-37 at halftime.

The Trappers stretched their lead to 18 points off a David Ayala 3-pointer just six minutes into the second half. A hook shot and a 3-point play by Gabriel Gutierrez a minute later gave the Trappers a 67-45 lead with 12:30 to play.

But NWC then went through one of the dry spells its seen in the season’s early going, not making a basket for the next six minutes. That allowed for Northeastern to pull within five points, at 67-62.

“That has been a bad M.O., where we take leads into halftime or big leads and then play bad for a stretch of time,” Collins said. “I do not know where it comes from.”

Fortunately for the Trappers, this matchup was a game of runs, and NWC went on an 11-2 run to lead 78-64 with three minutes remaining and went on to win 89-80.

Collins said they held Northeastern to only around 10 offensive rebounds — roughly half their average — which helped the Trappers limit their opponents’ production.

A balanced scoring effort was led by Ayala with 18 points, with five Trappers hitting double figures.

Heading into their fourth game of the week, the Trappers came out against Lamar and saw a low scoring effort early on.

Through nine minutes the game was tied at 11, and the two teams continued to battle until 22-22.

A 3-pointer by Alan Swenson sparked the Trapper offense, keying a 21-11 run in the final five minutes of the half that put NWC up 43-33 at halftime.

However, Lamar came out firing to start the second half, going on a 12-2 run to tie the game at 45.

Thanks to their low turnover rate, Lamar continued to keep the fast-paced Trapper offense at bay. The two teams continued to battle, with the Trappers leading 62-61 with six minutes remaining in the game.

“They have two division I guards which helps them take care of the ball,” Collin said, “but even then I was not sure our pressure defense was good enough.”

The team was without Oluwaseyi Oyeku, the coach said, which forced Swenson to play nearly the entire game and may have led to some fatigue.

The two teams went back and forth until Lamar took a lead 75-74 with 30 seconds remaining.

Northwest missed multiple layups and a turnover, followed by three Lamar free throws that made it 78-74 with four seconds left.

The Trappers got a consolation bucket at the buzzer to make the final score 78-76.

“In five games we have led for around 96 minutes,” Collins said. “We just need to learn how to finish at the end of games.”

Alex Avila led the Trappers in scoring with 21 points on 8-of-10 shooting from the field. Three other Trappers scored in double figures.

Collins said the team’s depth has enabled 10-man rotations nearly every game, giving them the ability to wear down opponents with constant pressure.

A second early season matchup against the Rocky Mountain JV (4-6) proved a tougher matchup than the first just over a week earlier.

A slow scoring start by both teams saw the Trappers up 16-14 with nine minutes remaining in the first half.

A 15-6 run started off a transition bucket by Andre Loigu then helped the Trappers build a 31-20 advantage over Rocky, but the Battlin’ Bears would not go away, making it at 35-30 at halftime.

The Trappers road trip continued on Wednesday with a trip to Glendive to take on Dawson Community College, and Thursday to Miles Community College. At the conclusion of the road trip, Northwest will have played seven games in 10 days.

On Saturday, the team will host the “Trapper Buddies” camp for area youth in third through eighth grades at Cabre Gym, with the event running from 9 a.m. to noon.

Collins said he hopes that this experience will help the team interact with the community and help them grow the team’s influence and help everybody get excited about Trapper basketball.

Registration is $25 per student, with all proceeds going to the NWC basketball program.