Even though Northwest College women’s soccer couldn’t earn a win last weekend, the Trappers showed significant growth in their most recent matches.

The women lost road games to … 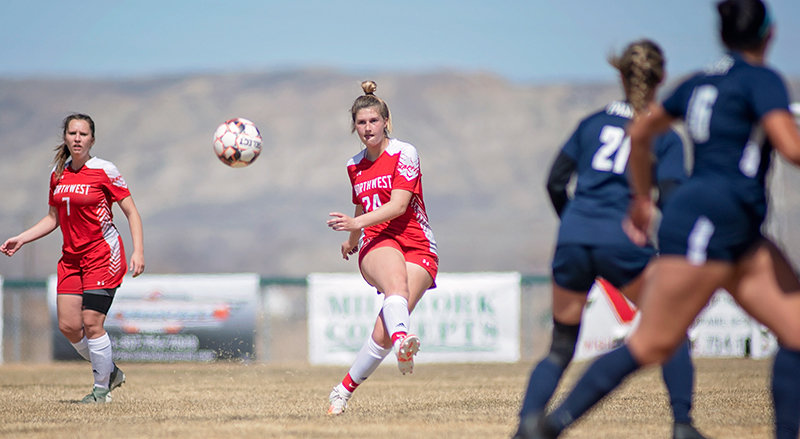 Kaitlin Castle boots a ball in a NWC women’s soccer match earlier in the season. The Trappers displayed growth in their recent losses to WNCC and LCCC.
Tribune photo by Carla Wensky
Posted Tuesday, May 4, 2021 8:00 am
By Carson Field

Even though Northwest College women’s soccer couldn’t earn a win last weekend, the Trappers showed significant growth in their most recent matches.

In Friday’s meeting with WNCC, NWC struggled defensively in the first half. The Trappers allowed a goal in the 33rd minute, followed by two shortly after halftime, falling in a 3-0 hole.

“The goals we conceded were very preventable,” head coach Rob Hill said. “We were slow to compete and not winning the ball.”

But in the late stages of the match, NWC found an offensive spark. Sophomore Alexa Williams — Northwest’s starting goalkeeper — played in the field in the final 45 minutes. Her presence was crucial to the squad’s attack, scoring a goal in the 74th minute to get NWC on the board.

A few minutes later, sophomore Kierra Cutright found the back of the net in the 83rd minute, closing the gap to just one goal, 3-2.

“We got more opportunities and a little fight back,” Hill said. “I felt like when we started to win the first ball and compete, that’s when we gave ourselves a chance.”

Moments after Cutright’s goal, WNCC answered with a score of its own, sealing the Cougars’ two-goal win.

“We were pushing forward to get the equalizer, and that’s the risk you take when you try to attack,” Hill said.

While the margin was wider, Hill said NWC’s effort was better the next day.

LCCC is the top team in Region IX, posting a 7-0 overall record to this point and holding the No. 3 spot in the NJCAA rankings. Still, Northwest competed, recording several shots on goal and passing efficiently throughout the contest.

“I thought we played much better against LCCC,” Hill said. “We did a pretty good job of forcing them to long shots. For the most part, the girls gave a pretty good account for themselves.”

Laramie County scored twice in each half to cruise to the 4-0 win. Despite the four-goal difference, Saturday’s outing was an improvement from past NWC matches against Casper and Otero, where the team lost 6-0.

“There were some real positives there,” Hill said. “I didn’t think we got torn apart on the goals. We had opportunities for ourselves, and that was quite pleasing.”

The conference slate is now in the rearview mirror, and the Trappers have just two more regular-season games on the horizon. This week, they play a Wednesday morning contest against Central Wyoming, the cellar dwellers of Region IX.

NWC’s lone victory came against CWC in April, and Hill thinks this upcoming match against the Rustlers is an opportunity for the team to build on its recent growth.

“Coming off LCCC, even though they lost it, it was still a positive performance,” Hill said. “It’s a chance to possibly put another win on the scoreboard.”