The final matches of 2021 for the Trapper wrestling took place at the Battle of the Rockies in Great Falls, Montana, on Friday and Saturday, as they looked to finish the year on a positive note … 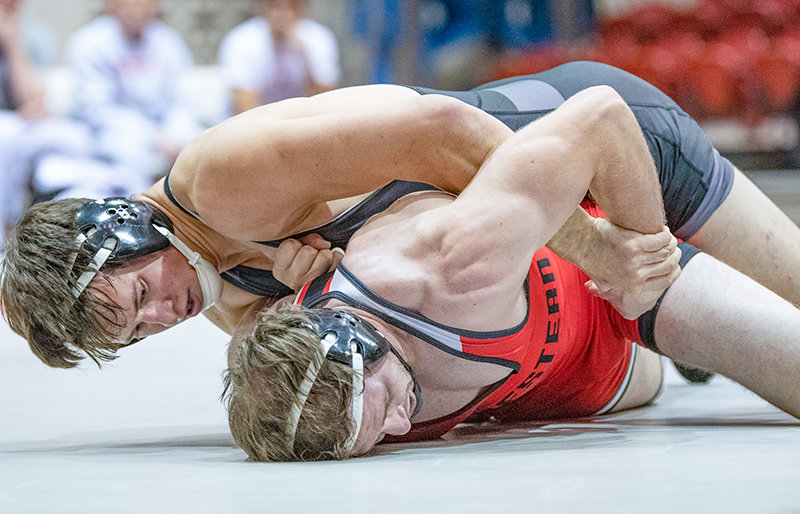 Ryker Blackburn holds down Western Wyoming’s Tyce Raddon during their matchup at 197-pounds at the Trapper Duals on Nov. 5. Blackburn won two matches last weekend during the Battle of the Rockies duals before being forced to withdraw due to a knee injury.
Tribune photo by Carla Wensky
Posted Tuesday, December 7, 2021 8:10 am
By Seth Romsa

The final matches of 2021 for the Trapper wrestling took place at the Battle of the Rockies in Great Falls, Montana, on Friday and Saturday, as they looked to finish the year on a positive note heading into winter break.

In their first contests in three weeks, the Trappers came out on Friday with a dual against Simon-Fraser and an exhibition match against both Eastern Oregon and Simpson University.

Ryker Blackburn continued to lead the Trappers at 197 pounds, as he won via a pin against Simpson and Simon-Fraser. However, he was forced to withdraw for the remainder of the weekend due to a knee injury.

Kendell Cummings had one of his best weekends, as he won via pin against Simpson before losing close matches against Eastern Oregon and Simon-Fraser. Cummings then came back for Saturday’s tournament and placed fourth overall going 2-2 on the day. All of his matches ended by decision.

Northwest College head wrestling coach Jim Zeigler was happy with Cummings’ performance, and was glad his athletes were finally able to compete in a tournament format.

“When you get beat up a lot, wrestling seven times in a weekend, you learn a lot,” Zeigler said. “They start to go out there and compete like warriors.”

Cummings is wrestling down to 133 pounds after starting the season at 141.

Traycee Norman won via decision against Eastern Oregon, but fell during the tournament, losing via pin at the 1:57 mark in the first round.

At 125 pounds, NWC wrestlers Ivan Lee and Avery McSpadden both went 0-5 during their matches over the two day span.

“I cannot say enough about the courage it takes from these kids,” Zeigler said. “I am really proud of these guys.”

The Trappers will now head into an extended break for the end of the year, as they will not be wrestling again until duals in Miami, Oklahoma, on Jan. 14.

Zeigler said the team is working on its studies over the next two weeks before they head into the winter break, looking to finish on an academic high to finish the year.

“I think they will be better people for it,” Zeigler said, “and that is the goal.”