After starting the season 0-4, the Trapper women’s basketball team traveled to Billings on Tuesday and got their first victory of the season, beating the Rocky Mountain JV. 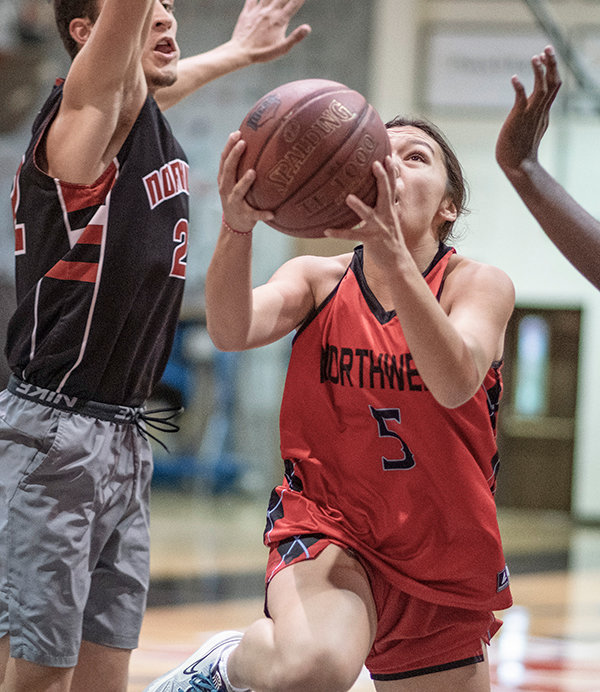 Freshman Kiana Quintero attempts a layup as two Trapper redshirts attempt to block her shot during an Oct. 21 scrimmage. The women’s team earned its first victory of the season Tuesday against the Rocky Mountain JV.
Tribune photo by Mark Davis
Posted Thursday, November 18, 2021 8:15 am
By Seth Romsa

After starting the season 0-4, the Trapper women’s basketball team traveled to Billings on Tuesday and got their first victory of the season, beating the Rocky Mountain JV.

“I am excited we were able to get our first win, hopefully we can just keep it rolling now and go 3-0 this week,” Trapper head coach Lauren Davis said.

Rocky Mountain answered with an 8-0 run to tie the game with a minute remaining in the first quarter.

A jumper by Nayeli Acosta gave the Trappers the lead heading into the second quarter, 15-13.

A back and forth defensive effort over the first four minutes of the second quarter saw the game tied at 17 as each team tried to find any advantage they could going into half.

The two teams continued to exchange baskets, never more than four points apart, with Northwest holding a 32-30 advantage going into the half.

In the third quarter, the Trappers made a 10-2 run, capped by a Kierra Cutright layup, to take a 42-32 lead over Rocky. The lead stayed at 10 for the next four minutes as the teams exchanged baskets to a score of 48-38.

The Trapper lead grew to as many as 16 points, but in the fourth quarter, baskets on three straight possessions pulled the Battlin’ Bears within six — 56-50. Rocky got as close as five, but the Trappers closed out the game on a 21-7 run to take a 79-60 win.

Northwest traveled to Riverton on Friday and Saturday to take part in the Central Wyoming College Tournament, starting their weekend against Western Nebraska (3-0).

The Trappers were better at breaking the press early on against the Cougars, battling the Cougars to a 10-10 score. Western Nebraska began to create separation late in the first quarter for a 19-14 lead.

The second quarter did not bode well for the Trappers.

The Cougars began to turn up the pressure, with turnovers and fouls beginning to pile up for NWC.

“We have to get our foul trouble under control, and if we get in foul trouble then our bench has to come in and play their part,” Davis said.

NWC’s only points in the quarter came off a layup by Brenna Rouane and a free throw by Tatiana Coleman. The Trappers were outscored 32-3 in the period, and went into halftime trailing 51-17.

The second half looked much like the second quarter.

Western Nebraska continued to force Northwest turnovers, with a total of 32 by the end of the game.

The Trappers trailed by 48 points going into the fourth quarter, and Western Nebraska would build their lead to as much as 57 en route to a 107-54 win. The Cougars held the Trappers to 14% shooting from 3-point range and 37.5% from the field.

“I think the biggest part of my coaching style is I never want the team to give up,” Davis said. “We always need to act as if we are winners and stay disciplined in what we are doing whether we are up by 20 or down by 20. I still want to play the same with a sense of urgency and desire to win.”

Heading into Saturday, the Trappers matched up against Lamar Community College (4-3) as they looked to end their 0-3 skid to start the season.

Lamar came out in a zone defense, which the Trappers were able to figure out early on to take a 15-11 lead.

Unfortunately, turnovers continued to plague NWC as Lamar took a 21-18 lead into the second quarter.

A low scoring period ended with Lamar up 32-27 at halftime.

Needing an answer, Northwest came out firing in the second half.

A 16-5 run by the Trappers gave Northwest the lead and forced a timeout from Lamar.

“There was a sense of urgency. Kierra [Cutright] came out and had a wonderful game and I think we had girls who followed her lead and followed her energy,” coach Davis said. “I think that it is huge to have someone each night who brings the energy and hopefully everyone else can feed off it.”

Lamar finished the quarter on a 5-0 run, capped by a buzzer-beating layup to trim the Trappers’ lead to 43-42.

A back and forth battle commenced in the fourth quarter, with the two sides tied at 51 with 5:30 left. The Trappers went on a 6-1 run to take a 57-52 lead with two minutes left, but Lamar answered with a 5-0 run off a pair of free throws and a turnover that led to a 3-point play.

From there, it became a free throw game.

Lamar held a 60-58 advantage, but Coleman made two free throws with four seconds remaining to tie the game at 60 and send it to overtime.

Darla Hernandez led the Trappers with 18 points, followed closely by Acosta with 15.