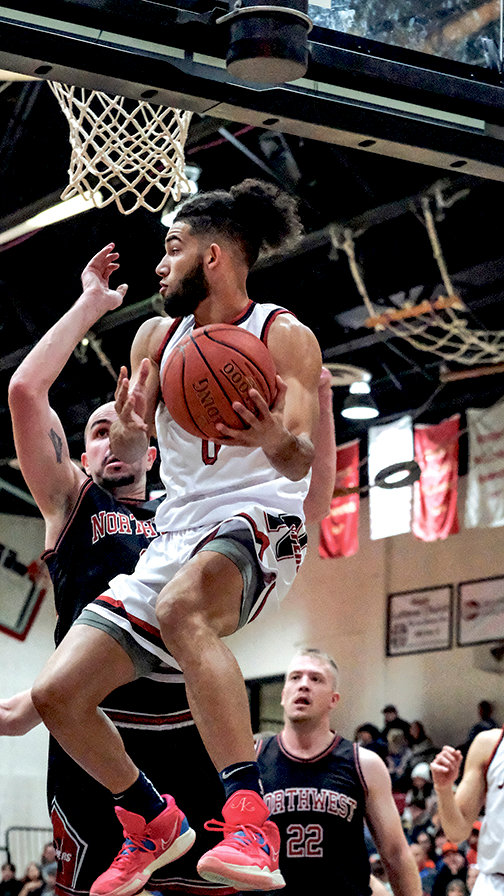 Milton Rodriguez Santana looks to pass while in the air during a matchup against the Northwest All-Stars in November.
Tribune photo by Seth Romsa 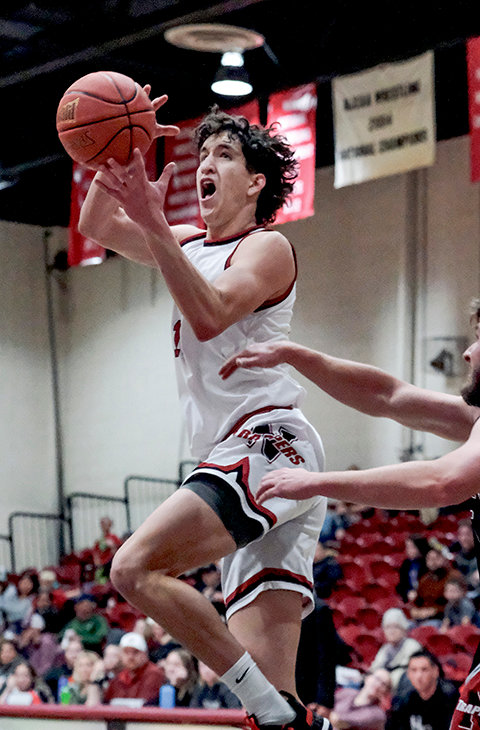 David Ayala finishes through contact during a contest against the Northwest All-Stars in November. The Trappers reached double digit wins on the season after a trip to Salt Lake City.
Tribune photo by Seth Romsa
Previous Next
Posted Thursday, December 8, 2022 9:28 am
By Seth Romsa

Kicking off the weekend early on Thursday, the Trappers (10-3) matched up with Utah Peaks Prep.

Both teams battled early over the first seven minutes, before a 15-0 run by Northwest gave the Trappers a commanding 28-13 lead with nine minutes left in the first half.

Northwest continued to push the pace the rest of the half, heading into the break with a 45-33 lead.

A 13-5 run over the first four minutes of the second half quickly pushed the lead out to 20, giving Northwest breathing room early.

The Trappers continued to cruise in the second half, winning by 31 in a 104-73 victory.

Northwest dominated the paint, finishing with a 58-14 advantage in paint points while also out-rebounding Utah Peaks 61-32.

Seven Trappers finished in double figures led by 18 points by Mack Page off the bench, with David Ayala chipping in 12 points and 11 rebounds.

The Trapper bench outscored Utah Peaks 61-16 for the game.

After a quick victory on Thursday, the Trappers knew they would have their work cut out for them — squaring off with host No. 2-ranked SLCC (8-0).

Heading into the game coach Andy Ward knew the Bruins were successful in transition, and the Trappers worked early to slow down that transition game.

“They are hard to stop so I wanted to make it a lower possession game,” coach  Ward said.

Despite SLCC jumping out early 6-0, the Trappers battled back and held the lead midway through the first half 18-16.

The two teams were tied at 29 with 1:40 remaining, before key plays gave the Bruins momentum going into the half.

Free throws and a 3-pointer before the buzzer gave SLCC a 34-29 lead and momentum going into the break.

That momentum carried over into the second half, with a 12-0 run giving the Bruins a 12 point lead early.

“Rebounding was a key for us, we did a really good job of that in the first half,” Ward said. “They got away from us in the second half with some putbacks, they got some offensive rebounds and they got the game going a little faster than I would have liked.”

Northwest was unable to recover from the quick run, not getting closer than nine points the rest of the way.

The Trappers shot 21-of-62 from the field for the contest in the 91-74 loss to SLCC’s 26-of-60, while remaining even with the Bruins in most statistical categories.

After the loss Friday night, the Trappers looked to recover heading into Saturday against Real Salt Lake.

Both teams battled early before Northwest captured the lead for good at 20-18 in the midst of a 9-0 run.

A late run in the first half pushed the lead out to 40-35 and gave the Trappers momentum going into the break.

Northwest held off early challenges in the second half, using a strong push midway through the half to make it a double-digit contest.

Real Salt Lake cut the lead down to single digits with 7:12 left, but did not get closer than seven points as Northwest finished with a 79-69 victory to earn the team’s 10th win of the season.

“We didn’t shoot the ball well from the field all weekend,” Ward said. “I thought we missed some easy shots that could have helped our field goal percentage. On the positive side we shot well from the free throw line, every game down there we were above 70% as a team.”

Northwest heads back on the road for the final time this semester, heading to take part in the Western Nebraska Community College Classic Friday and Saturday in Scottsbluff.

The Trappers matchup with host WNCC (6-4) on Friday night at 7:30 p.m. before turning around to take on Otero College (5-7) on Saturday at noon.

“(WNCC) play in a similar fashion to Salt Lake,” Ward said. “We are going to have to keep them off the boards and keep them out of transition.”